MORE THAN 2,000 MOVIE THEATERS IN 71 COUNTRIES TO TRANSMIT VERDI'S CLASSIC 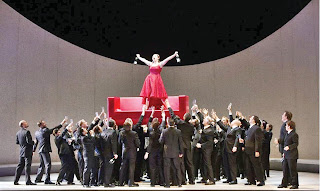 One of the world's most popular operas will be transmitted live in select movie theaters around the globe.  Giuseppe Verdi's La Traviata will be transmitted live from the stage of the Metropolitan Opera House on Saturday, March 11 at 12:55pm with an Encore Performance in theaters Wednesday, March 15 at 6:30pm local time. The opera is sung in Italian with English subtitles. Visit metopera.org or fathomevents.com for theater locations and tickets.
Starring Met soprana Sonya Yoncheva, reprising her hit role as Violetta, the doomed heroine of Verdi's most treasured masterpiece. Popular Met tenor Michael Fabiano is her frustrated lover Alfredo and ever-popular veteran Met baritone Thomas Hampson is his disapproving father. Nicola Luisotti conducts the sterling Metropolitan Opera orchestra from the pit in an eye-popping minimalist production by Willy Decker. which created a sensation at Salzburg in 2005.
The story of La Traviata is based on a French play adapted from the novel Camille by the great Alexandre Dumas. It tells of the famous courtesan Violetta Valery, who, in the opening scene, gives a party to celebrate her recovery from an illness. Gaston, a viscount, brings to the party a good friend, Alfredo Germont (Michael Faviano), who as long admired her from afar.
Violetta's current lover, Baron Douphol, is asked to give a toast, but declines.  The crowd turns to Alfredo, who agrees to sing a brindisi – a drinking song (Alfredo, Violetta, chorus: Libiamo ne' lieti calici – "Drink from the joyful cup"). Before the first plaintive strains of music are heard in Verdi's "La Traviata," a gentleman with long white hair and beard to match takes his seat next to a giant clock at the side of the Metropolitan Opera stage. This is the character, Doctor Grenvil, performed by veteran Met bass-baritone James Courtney. The character sits silently throughout the opera, as if an ominous precursor for the tragedy to come. His character, and the giant clock, loom over Violetta as her story of feigned gaiety devolves into tragedy. Doctor Grenvil is  the specter of fate.
This production of Ls Traviata is fast-paced and exciting with dazzling choreography by Athola Farmer, visually exciting costumes and sets by Wiolfgang Gussmann and mood-setting lighting by Hans Toelstede. This production is what modern opera is all about and definitely worth seeing live on Saturday, March 11. You might want to get tickets to bring a friend whose never seen opera, This would be a great introduction.
The HD broadcast of "La Traviata," starring soprano Sonya Yoncheva as Violetta, tenor Michael Fabiano as Alfredo and baritone Thomas Hampson as his father, with Nicola Luisotti conducting, will be shown starting at 12:55 p.m. EST on Saturday. A list of theaters can be found at the Met's website: metopera.org/hd.
In the U.S., it will be repeated on Wednesday, March 15, at 6:30 p.m. local time. 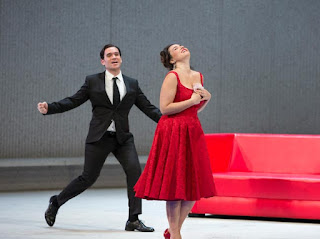 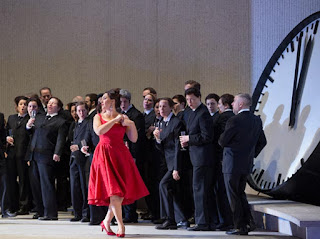 Posted by Dwight the Connoisseur at 8:28 AM