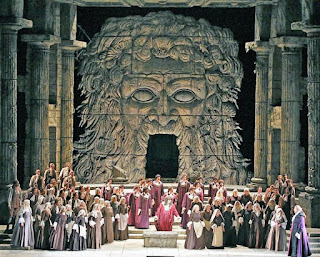 NEW YORK--One of the distinct triumphs of the 2016-2017 Metropolitan Opera is the current production of Mozart's masterpiece Idomeneo, which opened March 6 and will be transmitted in movie theaters worldwide, Saturday, March 25 at 12:55pm ET with an Encore Presentation, Wednesday, March 29 at 6:30pm local time. Check local listings of visit metopera.org or fathomevents.com for further details.  The matinee performance transmission will be hosted by the Met's esteemed bass-baritone star Eric Owens, and will be seen in 2,000 movie theaters in 71 countries.

Matthew Polcenzani delivers a spectacular performance in his Met role debut as  Idomeneo, the King of Crete, who has been fighting on the side of the Greeks in the Trojan War.  with Nadine Sierra as Ilia, the captive Trojan princess, in her role debut. Elza van den Heever is  Princess Elettra, the jealousy-driven daughter of Agamemnon, commander of the Greek army, who has taken refuge in Crete after killing her mother, Clytemnestra, in revenge for her father's death. Nadine Sierra is Illia, Idameneo's love interest, and the source of Elettra's growing enmity.

The music in Idomeneo is ravishingly beautiful. Michael Polenzani's silver-toned voice and Alice Coote's agile coloratura make for an engaging and satisfying afternoon of great opera. The singing is spectacular.

The opera itself is a difficult one to stage. It is written in the form of opera seria, a static format where the singing is bridged by lengthy recitative. Jean-Pierre Ponnelle's imaginative staging, which premiered at the Met in 1982, gives the production some visual depth, that heightens the sense of drama. Revival Stage Director David Kneuss and Lighting Designer Gil Wechsler deserve a considerable amount of credit for the success of this production. The imaginative use of staging, lighting, and great singing are irresistible and make this one of the highlights of the season. All that, with the Met's legendary Music Director James Levine conducting in the orchestra pit, and you have a perfect match.

A giant image of the god Neptune looms in the background over the entire proceeding. Kudos to Met bass-baritone Eric Owens, who also doubles as the Live HD Host, and his booming voice, for a sterling cameo that provides the final dramatic note. Go see it. 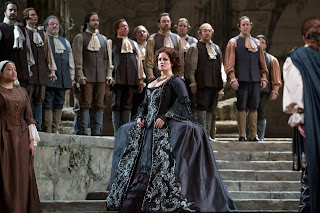 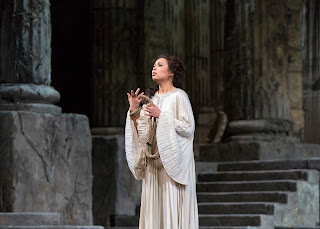 Posted by Dwight the Connoisseur at 12:11 PM