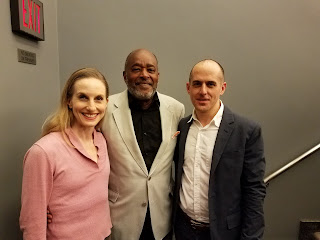 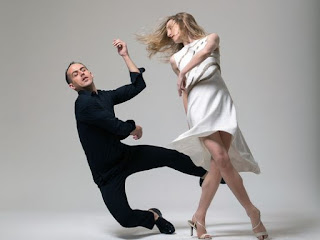 NEW YORK-- The Joyce Theater in Chelsea was the setting for a landmark performance of an orginal work, Some of A Thousand Words, a collaborative project of veteran dancers Wendy Whelan and Brian Brooks with the musical accompaniment of the astonishing Brooklyn Rider string quartet. The work is a co-commission of The Joyce Theater Foundation's Stephen and Cathy Weinroth Fund for New York, along with The Knetucky Center for the Arts,  the Modern Centr for the Arts at University of Richmond and The International Festival of Arts and Ideas New Haven. Featuring music by Philip Glass, John Luther Adams, Colin Jacobsen, Tyondal Braxton and Jacob Cooper, Some of A Thousand Words clearly shows the power of dance to communicate deep emotions and complex human inter-relationships.

Both Wendy Whelan and Brian Brooks bring a wealth of dance experience to the table in their performnce. She, a veteran principal dancer with New York City Ballet in a career that spanned 30 years, 23 as principal dancer. Her resume includes work With Jerome Robbins and performances of virtually every major Balanchine role. A Dance Magazine Award winner in 2007, she has received both the Jerome Robbins Award and a Bessie Award for her Sustained Achievement in Performance.

Brian Brooks has an equally laudable career as Choreographer, Director and Performer. Recently appointed as the Inaugural Choreographer in Residence at Chicago's prestigious Harris Theater for Music and Dance, Brooks is also the recipient of a 2013 Guggenheim Fellowship.

Brooklyn Rider is a contemporary string quartet  which toured with composer,/singer and multi-instrumentalist Gabriel Kahane last season with music from their 2016 collaborative album The Fiction Issue. This season, Brooklun Rider releases their new CD So Many Things with mezzo soprano Anne Sofie von Otter, an album of contemporary music featuring pieces composed by John Adams,  Colin Jacobsen and Elvis Costello, among others. Easily, the group could have presented their own concert and received the rapt attention of the audience.

The combination of Whelan, Brooks and Brooklyn Rider was mesmerizing. Brooks and Whelan used their fluid movements to evoke a series of complex moods and  story lines that explored the dynamics of relationships and the solitary journey of souls seeking to connect even in the face of complex emotional obstacles.The work was presented in a seamless uninterrupted hour that seemed to fly by in an instant. The combination of music and movement was all-engrossing and ended much too soon. At the conclusion of Fast Fall, with music composerd by Philip Glass, in his String Quartet No. 3 (Mishima), the audience reaction was a stunned silence, followed by a rapturous ovation.

There's no substitute for deeply rooted experience and both Whelan and Brooks have it in spades. Their collaboration is unique in terms of its depth and creativity. It is deeply absorbing and lingers long in the psyche, well after the sound of the applause has died and the lights have dimmed onstage.


Posted by Dwight the Connoisseur at 1:49 PM