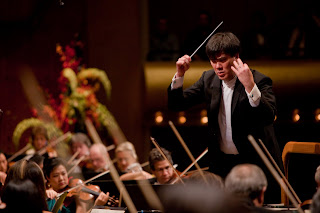 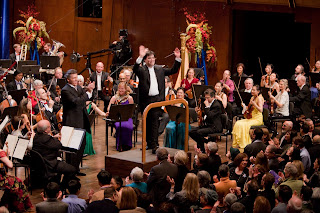 Alan Gilbert, the newly named Music Director of the New York Philharmonic was ebullient as he gave the down stroke, commencing the New Year of his inaugural season. Among his first initiatives as music director was the appointment of American baritone Thomas Hampson as Mary and James G. Wallach Artist-In-Residence. The Grammy-winning vocal artist, who hails from Spokane, Washington, was also the perfect choice to headline the evening’s All American program.

Each of the works presented also had a history unique to the orchestra.

From the beginning strains of Aaron Copland’s beloved Appalachian Spring, a tone poem written to accompany the choreography of dance legend Martha Graham and based on the poetry of Hart Crane, this was a celebration of unique character. The Philharmonic introduced this music in 1945, the year it won the Pulitzer Prize. You’ll hear dance and fiddle tunes, and of course the beloved “Simple Gifts,” based on a Shaker hymn. “Simple Gifts” has been lifted to anthem-like proportions in the collective mind of the concert-going public. It was raised to the solemnity of a hymn by Gilbert’s deft direction.

Hampson caressed each word of Copland’s Old American Songs, making them sound as if they were written just for him. He was particularly effective in the sections that called for strong, colloquial dialect. He conveyed the words with both humor and pathos. Each of Copland’s songbooks is unique and Hampson was masterful in molding his delivery for each of them. The song, “I Bought Me a Cat” was the most humorous of the bunch, delivered with gusto and complete with orchestral sound effects!

The New York Philharmonic commissioned George Gershwin’s “An American In Paris” in 1928. It was written as a symphonic ballet celebrating Gershwin’s happy encounter with Paris in the ‘20s and the sounds of New York’s jazz scene and Tin Pan Alley that reverberated in his soul. Gilbert unearthed all the sparkling, rhythmic nuance of the piece and made plenty of room for the battery of percussion and hallelujah chorus of brass that made this one of the most distinctive compositions in the American orchestral repertoire. The concert ended in plenty of time for patrons to head elsewhere to watch the Times Square Ball drop. Considering the exuberant tone of Gilbert & Company, further celebration was superfluous!

Posted by Dwight the Connoisseur at 9:02 AM