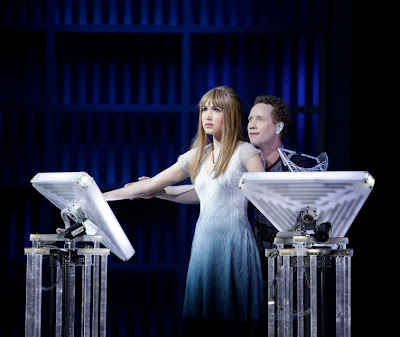 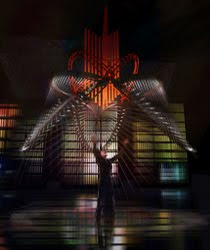 1. Sara Heaton as Miranda and Hal Cazalet as Nicholas and the Robots-Jonathan Williams

2. James Madalena as Simon Power as he is transformed into a System inin

Chicago Opera Theater opened its current season at the Harris Theater with Tod Machover's latest opera, Death and the Powers (The Robots' Opera). Robert Pinsky, a former Poet Laureate, wrote the libretto to a story of his and Randy Weiner’s.

True to his name, Machover "makes over" the opera form, extending it to where mechanics become equal to the music. He worked with a large team at the MIT Media Lab on a commission from Monaco's Association Futurum to develop the concept. The current production is a collaboration between MIT, the American Repertory Theater and Chicago Opera Theater. Those credits alone attest to the seamless fusion of technology and art, which, in itself, is a controversial concept. That the lovers and haters of this groundbreaking work take such passionate sides indicates its importance.

Audiences have already experienced the virtual takeover of the film industry by computer-generated technology. The success of Machover’s work almost assures a similar hijacking in the world of live opera and theater. Witness the current pyro-technics now on Broadway, as evidenced by the new Spiderman production (“Turn Off The Dark”) by Julie Taymor, in which the orchestra pit has been turned into a bank of computer screens and servers more akin to a NASA control room.

In Death and the Powers, the one act opera opens and ends with robots discussing humans, death and suffering. The concepts are hard for them to understand. Is death entropy? (Here, the word has a double meaning. In science, it means a measure of energy, in which all matter in the universe is at a uniform temperature, or heat death. In sociology, it refers to a doctrine of inevitable social decline and degeneration.) Or could it be data rearranged? A dream of something lost? All excellent questions, approves the head robot.

In seven scenes, the four principals--James Maddalena (Simon Power), Sara Heaton (Miranda), Hal Cazalet (Nicholas) and Emily Albrink (Evvy)--sing their hearts out. However, it is the robots and the technical innovations Machover employs that anchor the philosophical underpinnings of this spellbinding work.

The story of the opera follows the final days in the life of Simon Power, a powerful businessman and inventor who wants to reach beyond the bounds of humanity to preserve his legacy. He asks himself the question” When I die, what will I leave behind and how can I perpetuate that legacy?” As he approaches death, he begins conducting the final, and most important experiment of his life. He develops the means to transport himself from one form of existence to another, in an effort to project into the future.

Simon Power thus transforms into a System. Whether he is actually still alive, in the traditional sense, is still a question that is asked throughout the opera. Dramatic tension ensues because his family, friends and associates must decide whether what they perceive is real and if it is wise for them to follow. “Death and Power” gives the preamble to the old Star Trek TV series “to boldly go where no man has gone before” a new, and profound meaning.

“Death and the Powers” is an unsettling opera, both because of the questions it raises and the technologies it employs. Beware opera lovers; the invasion of the Operabots is imminent!

Posted by Dwight the Connoisseur at 7:45 AM