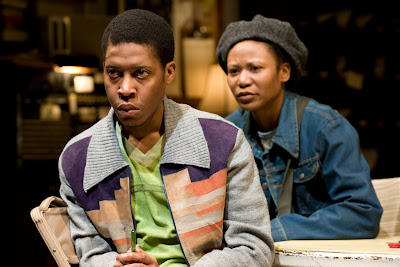 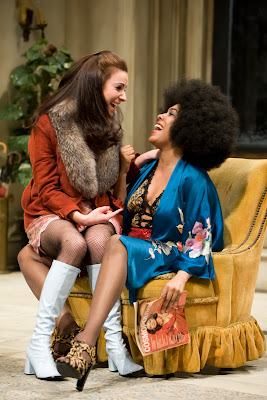 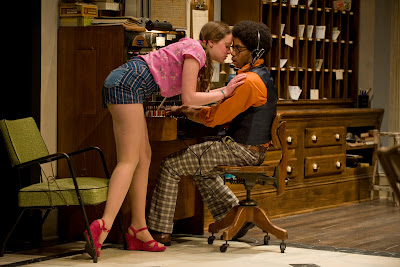 The play begins on Memorial Day 1973. The war in Vietnam has just ended. The Paris Peace Accords are signed. Nixon is President.

The air hangs heavy in a decaying, run-down Hotel Baltimore. Once the swankiest place in town, it is now slated for demolition.

Time has not been kind to the Hotel Baltimore. Signs of decay are everywhere. The "e" is missing from the hotel's neon sign. This small detail is critical. It signifies the beginning of the end for both the hotel and its residents.

As decayed as the physical structure of the hotel is, the stories and the lives of the people inside are rich in color and contradiction. Inside lives a community of society's marginal characters. They are a group of misfits, down on their luck, who dare to dream.

Eviction notices are issued, signaling an end to the Hotel Baltimore and their cozy little cocoon. This is where Lanford shines. He transforms an ordinary tale into an epic that resonates with truths about the human condition.

Hot L Baltimore is playwright Lanford Wilson's masterwork. The fact that he passed away just a few weeks before opening night makes Steppenwolf’s production a tribute to the greatness of his works.

The cast of 13 colorful characters and one" ghost', are in perpetual verbal and physical motion. The simultaneous action and dialogue takes place in the hotel lobby and its upstairs rooms, which are all made visible thanks to the staging wizardry of director Tina Landau and the artful scenic design of James Schuette. There is never a dull moment.

The director remains faithful to Landon's original writing, which uses overlapping dialogue and musical interludes. The resulting audio "babble" is hard at times to decipher, but the seeming chaos works perfectly within the context of the play’s story line. It reflects the chaos and uncertainty of the character's lives. It is therefore up to the viewer to draw his or her own conclusions.

At time comedic. At others tragic, Hotel L Baltimore gives the audience a ‘fly on the wall’ view of the pathetic, yet heroic lives of its inhabitants. At times evoking laughter, at others, pity, the play ultimately leaves the audience empathizing with their circumstance. In a “there but the Grace of God” kind of way, the twists and turns of Wilson’s character’s lives are not that far removed from the lives of anyone else. The audience is left feeling a profound sense of pity, knowing none of the characters will ever reach their utopia.

Among the hotel residents are two prostitutes, one sweet and innocent, the other hardened and bitter. Kate Arrington shines as Suzy, the most optimistic of the pair. de"Adre Aziza is a standout as the vibrant April.

The other characters run the emotional gamut. Molly Regan plays an elderly, forlorn woman who is consumed by her memories. Yasen Peyankov is a classic curmudgeon. Alana Arenas is a grifter who, paradoxically, eats organic.

All this is overseen by two apathetic hotel managers played with smarmy brilliance by James Vincent Meredith and TaRon Patton, who protect their own emotions by distancing themselves with witty barbs and biting innuendo.

A ghostly figure, known only as The Man (Sean Krill), wears a low brim hat and lurks upstairs, in the shadows. He roams from room to room rifling through the tenant's personal affects and randomly moving their furnishings while singing nostalgic 1930's songs. One wonders what he represents.

Is he the playwright’s muse or a symbol of the randomness and fragility of the protagonists’ lives?

April, the cynical prostitute, is the emotional counterpoint to the other character’s optimism.

As the theater goes dark, the play causes one to ask the question: is the past is really the past or is it only a different version of the present?

For that lingering thought alone, Steppenwolf's Hot L Baltimore is a worthwhile production not to be missed.

Posted by Dwight the Connoisseur at 9:43 AM