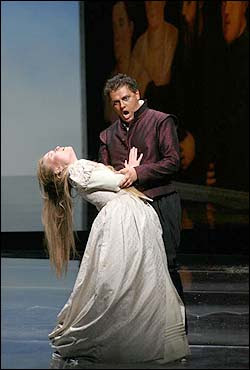 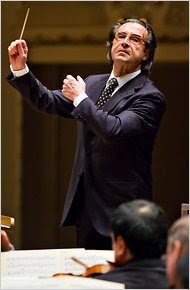 A concert version of Verdi's Otello was conducted, in his eagerly awaited return, by a healthy, vigorous Riccardo Muti. He silenced the sold-out audience's welcome back roar--when it was about to become a standing ovation--by plunging into the music.

This performance of Otello was only Maestro Muti’s 12th appearance at the podium in his first season as CSO Music Director, which has been twice interrupted by illness. The first, on the night of a Gala Performance, from which he withdrew at the last minute due to a lingering illness , the second, when he fell from the podium during a rehearsal in February. There was no evidence of the ill effects of either as he conducted with vigor.

Verdi’s writing in Otello melded words and music into one continuous fabric. There were none of the frivolous orchestrations or scene-delaying arias that were the fashion of his time. In fact, his writing seemed to be evolving; becoming more transparent and modern.

Arrigo Boito wrote the libretto from Shakespeare's play, Othello. It is a tragic tale that charts the arrival of Othello, a black man from Morocco in northern Africa, known as a Moor, who is a general in the Venetian Army. As General, Othello has been defending the Italian nation and its colonization of Cyprus against the Turks. When Othello arrives in Venice, Italy, an envious nobleman named Roderigo informs Iago, a high-ranking soldier, that Othello has secretly married the daughter of the Senator, Brabantio, Desdemona. Not only is Iago outraged by the thought of the mixed-race marriage, he is further offended by the fact that he had previously asked the senator for Desdemona’s hand in marriage and was refused. He is boiling over with resentment. Adding insult to injury, Othello has also promoted a younger, inexperienced soldier, over him.

Iago is seething, but his crafty intelligence takes over. He convinces Roderigo to awaken Senator Brabantio to tell him of his daughter’s elopement with the Moor. Iago then tells Othello that his father-in-law has come gunning for him.

Thus the cogs of jealousy and racism interlock and the wheels of tragedy are set in gear. Iago’s deceit leads Othello to condemn his virtuous wife, accusing her of being unfaithful with his friend, Cassio. The story is now in full forward motion, careening toward the inevitable.

In Verdi’s music for the opera, tension is paced in long lines, ensuring that the sum is greater than the parts. From the opening stormy scene, which Maestro Muti does more convincingly than anyone these days or in my memory, through Otello's suicide, the underlying tension never lets up.

Maestro Muti's well- respected fidelity to Verdi's written wishes extended to his substitution of Verdi's 1894 (Paris) revision of the Act 3 finale and to his choice of soloists, which submerged their egos to serve the demands of the music. The result; dramatic clarity replaced musical splendor.

All of the soloists were making their CSO debuts, with the exception of bass-baritone Eric Owens (Lodovico, Venetian ambassador).

Many opine that the opera should be called Iago because he is the puppet master of the proceedings. I don't know whether the originally scheduled baritone Nicola Alaimo would have made that so. What his substitute, Italian baritone Carlo Guelfi, lacked in power he made up for with meticulous finesse. He grew stronger as the opera progressed. Hearing a later performance would be instructive.

Bulgarian soprano Krassimira Stoyanova sang Desdemona, Otello's wronged wife. She was vocally glorious. The smoothness of the voice from top to bottom in the Willow Song and Ave Maria was a miracle. Scott Hostetler's English horn accompaniment, equally awesome, rated a solo bow-the only one among the orchestra.

Posted by Dwight the Connoisseur at 2:08 AM