A Tribute to Miles Davis: Sketches of a Jazz Legend 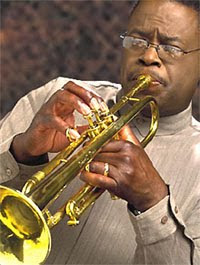 2. The many moods and seasons of Miles Davis

Chicago-It’s as wonderful as it is rare when a multi-generational and multi-cultural audience comes together to celebrate. The occasion was the second of three tribute performances presented by the Auditorium Theatre of Roosevelt University to honor the 85th anniversary of Miles Davis’ birth. Thursday night’s performance featured the Orbert Davis Sextet and the Chicago Jazz Philharmonic Chamber Ensemble in Sketches of Blue: An Orbert Davis Tribute to Miles.

Miles Davis and Orbert Davis are not related, but they have many things in common beyond masterful trumpet playing. Both were born and reared in Illinois. Both are musically schooled: Juilliard (Miles) and DePaul/Northwestern (Orbert). Both are composers. Both put together stellar groups. Additionally, Orbert is a music educator in the el Sistema (Dudamel) tradition, using music to transform the lives and futures of at-risk students. He started MusicAlive! for younger children and Chicago Jazz Philharmonic for junior high and above. And, Orbert has both performed Miles’ works and “played the role” of Miles to better comprehend his creative genius.

Act I of the Auditorium evening was a recreation of Kind of Blue, the best selling jazz record ever; it is quadruple platinum, having sold more than 4-million copies since its 1959 release. The Sextet recreating So What, Freddie Freeloader, Blue in Green, All Blues and Flamenco Sketches included Orbert Davis, trumpet and flugelhorn, Ari Brown, tenor sax, and Ernest Dawkins, alto sax, and a rhythm section made up of Ryan Cohan, piano, Stewart Miller, bass, and Ernie Adams, drums. The guys had as good a time playing as the audience had listening. That the audience knew and loved and appreciated what they were doing only enhanced everyone’s enjoyment.

Act II was Sketches of Spain—“Revisited.” Though essentially a studio work, one of a group Miles wrote with pianist Gil Evans, the original Sketches did have its first complete performance at Chicago’s Park West in 1995. This performance by the Chicago Jazz Philharmonic Chamber Ensemble, featuring Orbert Davis, solo trumpet, was the world premiere of his composition revisiting, adapting and arranging Miles’ Sketches (from Joaquin Rodrigo’s Concierto de Aranjuez).

Posted by Dwight the Connoisseur at 10:36 AM