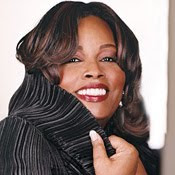 Chicago--Of all the contemporary jazz vocalists who claim to have been influenced by the late Sarah Vaughan, none wears her mantle more deservedly than Dianne Reeves. In a short, but powerful set in the Jazz series at Chicago Symphony Center, she paid tribute, not only to the Divine One, but other women songwriters and performers who are both her forebears and contemporaries.

Her play list featured songs by influential female singer-songwriters, including Joan Armatrading, Mary Chapin Carpenter, Tracy Chapman and Joni Mitchell. While honoring each for their respective genius, she couched each song's performance in a musical nomenclature uniquely her own.

The Grammy-award-winning artist was born with a chromatic DNA lineage. Her father, who died when she was two years old, was also a singer. Her mother, Vada Swanson, played trumpet. A cousin, George Duke, is a well known piano and keyboard player and producer. As a child, Dianne took piano lessons and sang at every opportunity. Her uncle, Charles Burrell, a bass player with the

Denver Symphony Orchestra, introduced her to the vocal stylings of Sarah Vaughan. The rest, as they say, is music history.

Post-concert, Ms. Reeves stayed behind to greet fans and sign copies of her most recent CD, When You Know, a collection of love songs, on Blue Note.