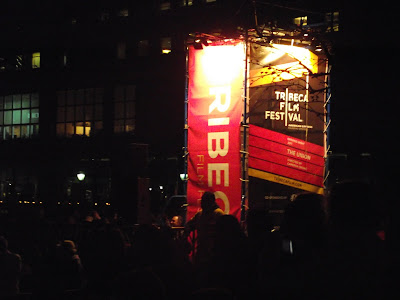 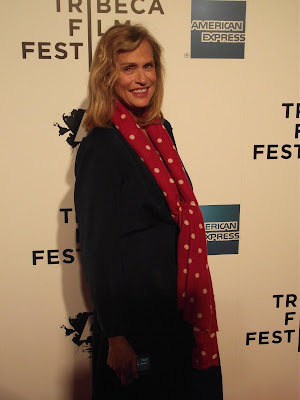 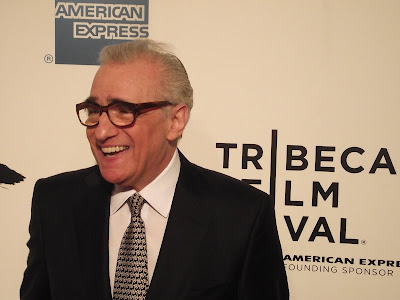 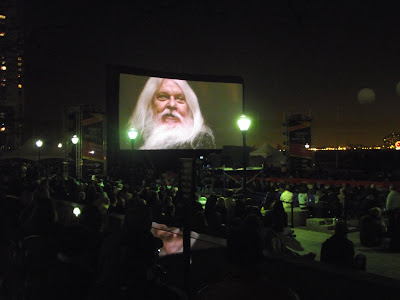 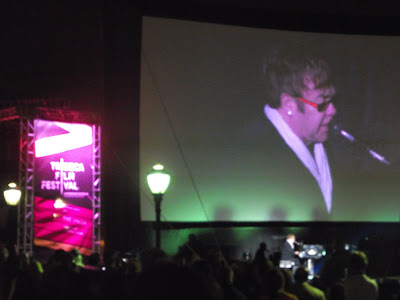 Story and photos for Dwight Casimere

Scenes from the Red Carpet and from the film screening and concert at the North Cove of the World Financial Center, New York City

New York—The North Cove harbor along the Hudson River behind the World Financial Center and Ground Zero provided the dramatic backdrop for the World Premiere of Cameron Crowe’s film “The Union”, an engrossing and uplifting look at the creative collaboration between Elton John and his musical mentor Leon Russell. The film, which opened the 10 year anniversary edition of the TRIBECA Film Festival was an intimate look at their musical kinship, forged in the early year’s of Sir Elton’s explosive career, and their subsequent reunion some 38 years later. It is a poignant reunion that pulls at both the heart and instrumental strings.

The documentary screening was anteceded by an electrifying live concert of Sir Elton solo at the piano and with his distinctive vocals of his legendary hits. It was an historic evening that will live long in memory. The plaza along the North Cove harbor was jammed with Sir Elton and Russell’s fans, many who brought their children, out of school for Easter Break, to witness the historic moment. At times, they seemed more like worshippers at a Revival as they swayed and sang along with the music that had become steeped into their souls over the generations that spanned the Summer of Love, the anti-Viet Nam War years, the ascendancy of Rock and its nadir, and the fusion of R & B and jazz. In the film, there are appearances by T Bone Burnett, who produced both the film and the album, Sir Elton’s lifelong lyricist Bernie Taupin, music icons Neil Young and Brian Wilson, and soul organ legend Booker T. Jones. Ringo Starr, Stevie Nicks, Jeff Bridges and Grace Jones all make cameo appearances to pay homage to the songwriting legends.

There are some particularly telling moments in the film, such as when a 10-voice gospel choir is brought into the recording session. Russell sits supine, covered in blankets and dreamily listens to the choir sing through the background charts he has written for them. Their delivery is crisp and musically accurate, but Russell wants more from them. With a wave of his hand, combing through his famous flowing white locks; he begins to singsong in falsetto the way he wants the phrase to sound. The gospel choir tries it again, and it is transfixing.

In another, Sir Elton recounts how deeply Russell and his creative genius have informed his life and music over the years. “We haven’t talked in 38 years. I regret not having reached out to him to tell him how important he has been to me. Somehow, when you get older, your memory begins to speak out to you with such clarity and you remember the people and events that molded you and made you who they are. Sometimes their voices speak out to you as if they are in the room with you. That’s what came to me about Leon and how much he means to me. And that’s why I decided to reach out to him and to do this album.”

The audience witnesses the creative process of making a musical album in The Union. How all the bits and pieces, stops and starts, musical “pop-ins” by guest soloists and background musicians are all seamless put together and sweetened by producer T Bone Walker and his editing team to create a final product that is sweet as Memphis pecan pie.

The album completed, the film then moves on to the release concert at New York’s Beacon Theatre. It is a glorious and triumphant moment. Sir Elton brings his good friend and mentor onstage with great fanfare and the opening strains are mesmerizing. Russell’s supple fingers and hands, surprisingly smooth and youthful looking in spite of the ravages of time, began to caress the keys of his piano, which emitted ethereal tones. The notes he plays are more like Ravel or Debussy than a blues pianist. But then comes that distinctive, gravelly, time-worn voice: “I’ve been so many places in my life and times, I’ve sung so many songs, I’ve made some bad rhymes,” he sings. But the words are less like singing, than speaking. They are the hushed tones of a lover in the still of night, laying his soul bare and revealing his deepest darkest secrets. “We are alone now,” he intones, “and I’m singing this song to you.” Indeed!

Sir Elton John concluded the night’s festivities with a rousing solo performance on his signature piano. Starting with his signature hit Tiny Dancer; he quickly swept into a stratospheric reading of Rocket Man that se the nighttime sky ablaze with musical fireworks.

I would like to see “The Union” again in the quietude of a theatre or on my home screen. I’m afraid much of the dialogue between Sir Elton, with his British accent and Russell, with his deep, Memphis twang, got lost in the ambient crowd noise and stiff Northeasterly wind off the chilly Hudson River. I’m sure it is one of those films that takes on more meaning and reveals more new content with each viewing.

Posted by Dwight the Connoisseur at 5:53 AM