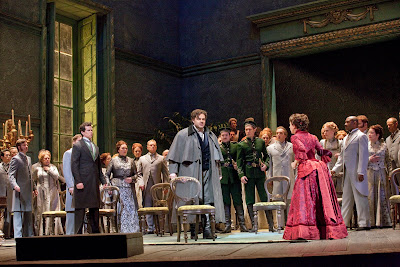 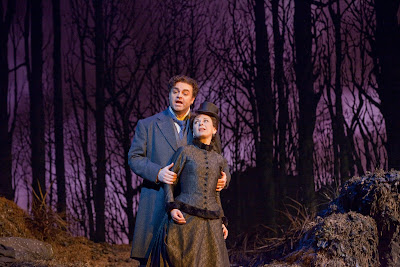 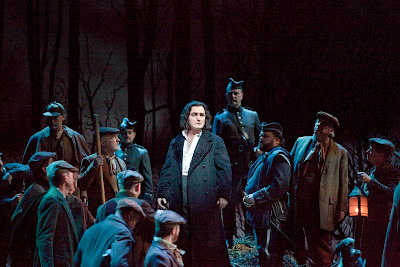 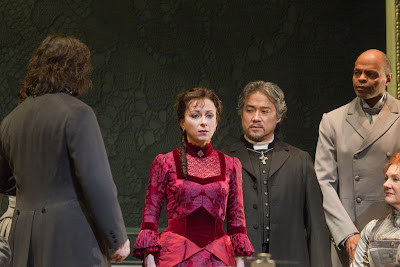 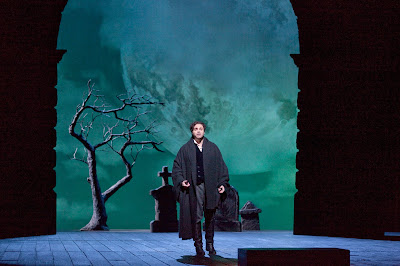 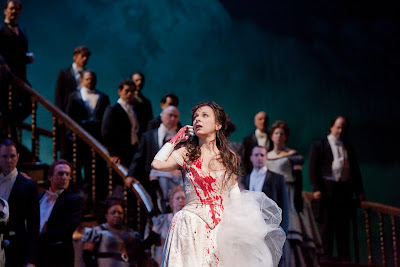 Set in early 19th Century Scotland, this brooding tapestry of forbidden love, family intrigue, madness and death, is based on Sir Walter Scott’s then-shocking novel, The Bride of Lammermoor. Set amongst the bogs and ancient castles of Scotland, the character of Lucia and the plot itself are driven by visions of ghosts.

The plot centers around a feud between the Scottish families of Ravenswood and Lammermoor. Enrico, Lord Henry Ashton of Lammermoor (Ludovic Tezier) has taken over the estate of Edgardo, Edgar of Ravenswood (the stellar tenor Joseph Calleja) by killing his kinsmen in battle. Enrico has fallen on hard times (maybe he lost out in Scottish Madoff futures!?) and is banking everything on a scheme to force his sister Lucia, Lucy Ashton (Natalie Dessay) to marry Arturo, Lord Arthur Bucklaw, in order to bolster his fortunes. Lucia has her eye on Edgardo and has a ghostly premonition that her love for him will end in tragedy.

Forced to marry Arturo, Lucia vows to end her life. During a lavish wedding ceremony, Lucia goes mad and murders her new husband. In the opera’s most riveting moment, Dessay gives the performance of a lifetime in the famous mad scene. This alone is worth the price of admission.

Baritone Kwangchul Youn is exceptional as the chaplain Raimondo, who is sort of the ‘heavy’ here, urging Lucia to sign a marriage contract and wed Arturo in order to save his family fortune.

Posted by Dwight the Connoisseur at 10:55 AM