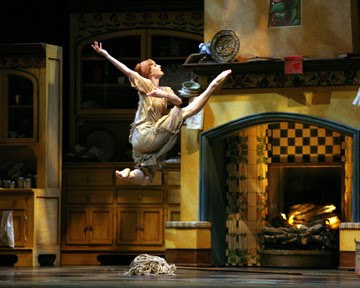 Photo for ABT by Marty Sohl-Gillian Murphy as Cinderella

NEW YORK—American Ballet Theatre concluded a scintillating spring residency at the Metropolitan Opera House Lincoln Center before embarking on a summer tour to the Los Angeles Music Center-Dorothy Chandler Pavilion (July 14-17) and Tokyo Bunka Kaikan, Tokyo, Japan (July 21-28) and Biwako Hall, Shiga, Japan (July 31). As if telegraphing the significance of the occasion, ABT brought out a treasure trove of its classics; Giselle, Lady of the Camellias, The Bright Stream, Coppelia, Cinderella and Swan Lake. It was nirvana for balletomanes and, for the uninitiated, an opportunity to see, inarguably, the best ballet company on the North American continent in action.

ABT’s Premiere Performance of Cinderella, as seen by Met audiences June 21-25, was first performed there on June 2, 2006.

That initial exposure may still be fresh in the minds of devoted followers, but the company proceeded to present the work with such fervor that it seemed to have arrived on stage fresh from Choreographer James Kudelka’s notations.

Scenery and Costumes Canada’s premiere designer David Boechler, with their distinctive color palette, were his first for ABT. They gave the production a timeless quality. Fellow Canadian, Christopher Dennis’ evocative lighting design was an integral part of the fable that was danced out on stage.

Sergei Prokofiev’s score is well-known and beloved and Conductor David LaMarche imbued it with the reverence it deserved, but he was not afraid to invest his own energy into the music with precise rhythms, bright tonality in the horns and woodwinds and lush, long melodic lines in the string section that both supported and underscored the action onstage.

Gillian Murphy as Cinderella and David Hallberg as Her Prince Charming made the performance memorable with their grace and vitality. There were sparkling cameo performances throughout and delightful scenes, such as The Garden in Act I. The Ball in Act II was completely enthralling, as was The Wedding, which served as the finale. Of course, the touching conclusion, in which Prince Charming located the rightful owner of the errant glass slipper, tugged at the heartstrings, causing the audience to lavish is praise upon the dancers with sustained applause. It was as if no one wanted the magic to end.

Posted by Dwight the Connoisseur at 12:35 PM