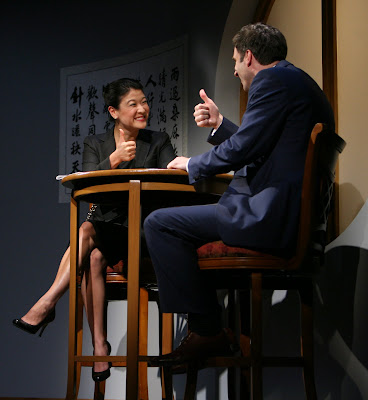 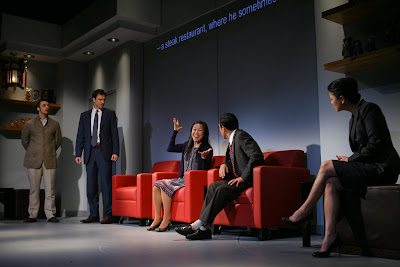 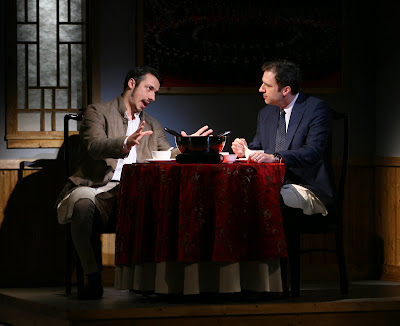 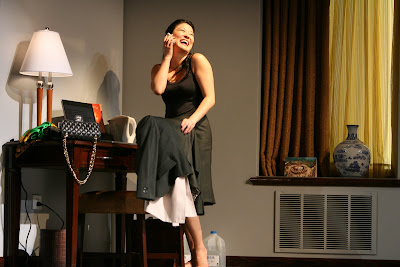 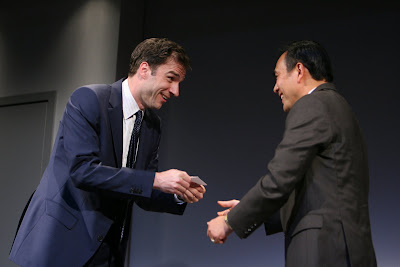 It starts out innocently enough; a lone actor walks on stage and begins what looks like an elementary lesson on Chinese/English translation. It quickly becomes apparent that this is no ordinary language class, but an introduction into the wildly satirical world of Tony Award winner and Pulitzer Prize finalist David Henry Hwang of M. Butterfly fame, making his Goodman debut with the world premiere of his Broadway-bound play Chinglish.

This is a very funny play about a rather unfunny subject. It is also very timely. The comedy makes no bones about not tip-toeing around the 800 pound gorilla that has been looming on the international scene, the increasingly complex problem of doing business with the world’s advancing superpower, China. Instead of approaching this delicate subject with all of the seriousness and deft handling that it deserves, Hwang throws his best comedic barbs at it, stripping away all pretense at polite convention and creating one of the most hilarious theatrical experiences ever encountered on the august Goodman stage.

The world premiere of Chinglish dovetails with the simultaneous staging of Hwang’s semi-autographical play Yellow Face (through July 17), currently being staged at Silk Road Theatre Project in a Goodman co-production with contemporary American theater luminary Steve Scott, who is Goodman Associate Producer. Yellow Face is playing at The Historic Chicago Temple Building, a few blocks from Goodman at 77 W. Washington, making for a mini David Henry Hwang festival of sorts.

Besides breaking new theatrical ground with the subject matter of Chinese/American business relations, Chinglish presents a cast of seven newcomers to the Goodman stage. Obie Award winner Leigh Silverman directs Chinglish. This is Hwang’s second collaboration with Silverman on a world premiere.

Chinglish bristles with witty repartee. The fact that the script is in both English and Mandarin with English subtitles does nothing to slow it down. In fact, director Silverman to heighten the comedy often uses those translations and the supertitles.

In addition to the sidesplitting banter and excellent comedic timing of the actors, the sets by Associate Set Designer Rod Lemmon, with their rotating and interlocking revolving platforms, are as much a part of the stellar cast as the performers. It is a marvel to watch them seamlessly segue from scene to scene.

James Waterston is Daniel, a businessman from Cleveland whose trying desperately to revive his bankrupt family sign-making business by landing a lucrative contract to participate in the building of a new cultural center. He travels to a remote provincial capital where he hopes he can fenegal his way into the inner circle of local government officials with the help of his Australian interpreter and business consultant Peter, played with brilliant ineptitude by Stephen Pucci. Along the way, he encounters Xu Yan (Jennifer Lim), the sexy, restless and upwardly mobile government go-between, who is revealed to be the lynchpin to the whole deal. Daniel quickly learns that things aren’t always what they seem in the polite world of Chinese-American business dealings. Hwang strips away the veneer of civility to reveal the subterfuges and falsehoods that lurk beneath the silken surface of formality and diplomacy. Not everything is as it seems. Daniel’s so-called “business consultant” is no more than a disgraced one-time college professor, hoping to cash in on a personal favor he is owed by a high-ranking Chinese government official. Xu Yan, the government go between, is revealed to have her own selfish reasons for championing Daniel’s cause and turns him into her boy-toy in the process. Even Daniel is revealed to have a dirty little secret in his past that threatens to undermine his efforts.

It’s hard to believe that we haven’t seen this superlative group of actors on the Goodman stage before. James Waterston is masterful as the befuddled Daniel. Jennifer Lim gives a meteoric performance as the mercurial Xu Yan. Her performance sizzles with sensuality and biting wit.

Chinglish is the real “Lost In Translation.” The play goes beyond the conundrum the Chinese language presents to most Americans. Besides its confusing characters, the Chinese language offers a number of challenges. Words and symbols often have more than one meaning. Something Daniel quickly learns in his first encounter with the Chinese Minister of Culture. “Yes,” as it turned out, was actually a firm “No!” In the Chinese language, using tone of voice for emphasis can also change the meaning of a word. Hwang uses these nimble turns of phrases to make his point. He plays on misconstrued word translations and cultural misconceptions to deliver the comedic goods. His efforts are nothing short of brilliant. There has not been another playwright as proficient in the vagaries and complexities of language since Shakespeare. To call Chinglish a mere comedy is an understatement. It is an incisive probing into a sensitive and pressing issue that looms mightily on the global horizon. That Hwang is able to make us laugh at it is a testament to his mastery as a theatrical writer. Chinglish continues through July 24. Hurry down to the Goodman to see it. You’ll regret having missed it. For information, visit www.goodmantheatre.org.

Posted by Dwight the Connoisseur at 4:12 PM