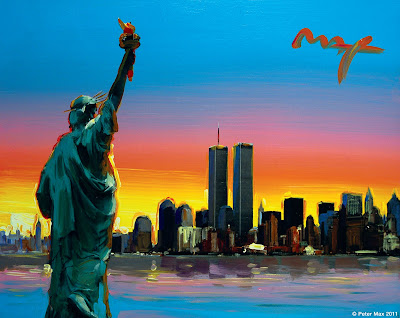 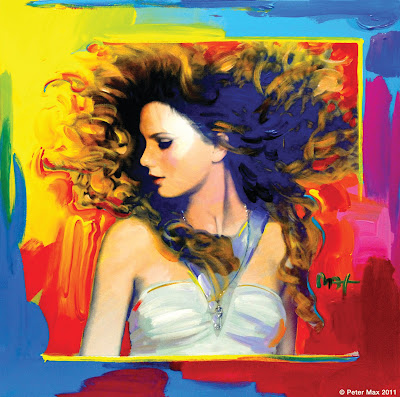 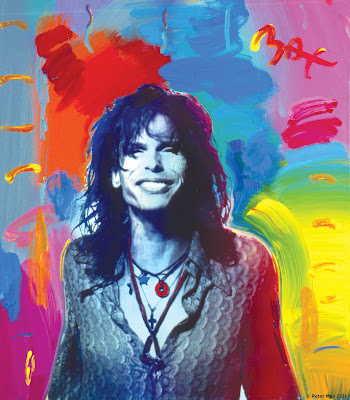 Schaumburg, Illinois---Shoppers at Woodfield Shopping Mall will have a unique opportunity to rub shoulders with one of the truly legendary artists of our time. America’s most popular living artist, Peter Max makes an exclusive appearance at Wentworth Gallery, Saturday, July 30 from 4pm-7pm. The artist will be featuring his 9/11 10th Anniversary Paintings, along with portraits of music icons Steven Tyler and Taylor Swift. The paintings will be on display at the gallery for three weeks.

“When 9-11 happened, I was shocked beyond belief,” Max said in an exclusive interview from his midtown Manhattan studio near Lincoln Center. “Like everyone else, it took me a while to process the sheer horror of the event, but, within a week or two, I started painting and would up painting a total of 400 canvasses. I started with just one, then one became four and then it began multiplying…four became 12, 14 became 20. I was on a roll.”

Max said that he became so passionate about the tragedy of 9/11, that the work became a near-obsession. “I poured my heart into it. I was determined to create a painting for every life that was lost in 9/11. The end result was that every single family who lost a loved one walked away from that tragedy with a painting given to them by me.”

Those who visit Woodfield Gallery this weekend will not only have an opportunity to meet the artist, but to acquire one of these once-in-a-lifetime creations.

Besides being an American art icon, Peter Max is a torchbearer for the legacy of contemporary American art. His art, like that of his forebears, is not only brilliant conceived and beautifully drawn with vibrant colors and strong images, it reflects the topics, tragedies, celebrated personalities and even the Presidents of the modern day United States.

“I’ve painted seven living Presidents,” Max said proudly. “Unfortunately, I had to work from photographs in every instance because Presidents just don’t have time to sit for me in the studio.”

At least one President, though, took the time to view Max’s work. “President Clinton was simply blown away by the 9/11 paintings. He just couldn’t get over them.”

After a childhood trotting the globe from Germany to China, Tibet, Israel and France with his fashion designer mother, Max studied art at the famed Art Students League on 57th in Manhattan under the tutelage of Frank Reilly, the well-known realistic painter. Reilly’s classmate was a young painter who would turn out to be n America’s most beloved artist, Norman Rockwell.

“As a child, growing up in Shanghai, I lived in a pagoda house. On one side, there was a Buddhist monastery, where I would watch the Buddhist monks painting Chinese characters on vast sheets of rice paper with huge bamboo brushes. On the other side, was a Sikh temple, where I could hear the beautifully sung prayers of the Sikhs,” Max vividly recalled. The magical colors, rituals and endless parades that embodied the splendor of the Orient later informed his work, which was ignited by two cosmic events; one, in the literal sense, and the other, more rooted in social change.

The young Peter Max became fascinated by the cosmos. One day while visiting the Mt. Carmel Observatory, his earlier fascination with astronomy was reawakened. At his insistence, his parents enrolled him in evening astronomy classes at Technion Institute. Later, as a young adult, the underground Cultural Revolution of the ‘60s began to emerge and to rock the foundation of American society and culture, as anyone knew it. Young Peter Max saw an opportunity to turn his expressionistic collages and paintings into a new medium that would bring art directly to the people…. the emerging medium of poster art. A new world of possibilities began to unfold. Max was able to connect with the youth of America through his art in a new and dynamic way. Like the Internet of today, poster art gave Max a medium to communicate with the youth of his time and reflect their images and ideas almost instantaneously through his posters. Max created his brilliant color combinations right on the printing press utilizing a breakthrough method known as “split fountain” technique that enabled him to blend colors as they were gong through the ink rollers. “It was just like playing a solo on the electric piano,” Max said at the time. It was a fitting analogy, as Max and his posters became the visual chroniclers of the revolutionary Age of Aquarius and the ascent of Rock Music.

It was this close association with the music of the ‘60s that brought Peter Max his lasting fame. Max was asked by John Lennon to do the original artwork for the Beatles animated film “Yellow Submarine” but by the time the film went into full production, he was too busy to complete the project and it was passed on to Czech artist and designer Heinz Edlemann.

Peter Max’s and the Beatles careers would continue through the years as almost a ‘doppleganger’ experience. Like the Beatles, Max also made his television debut on the Ed Sullivan Show. He also appeared on the Tonight Show with Johnny Carson and scored the cover of LIFE MAGAZINE with a feature cover story. During this heady period, Max’s art was licensed by 72 corporations and fostered a line of products that generated more than $1 billion is sales.

At 72 years old, Max continues to paint and to garner celebrity.

“I’m enthusiastic. I just adore working. I can’t stop.” In fact, Max says his painting is responsible for his youthful demeanor. “Although I’m 72, I’m physically at least 20 years younger because I literally get a workout while I’m painting. When I’m in the studio, I’m dancing with my paintbrushes.

“I love my work. Every single day, I come down to my studio to paint. As I come up the elevator to my floor, I start getting excited because I know in just a few minutes, I’m going to be painting!”

Posted by Dwight the Connoisseur at 7:51 AM