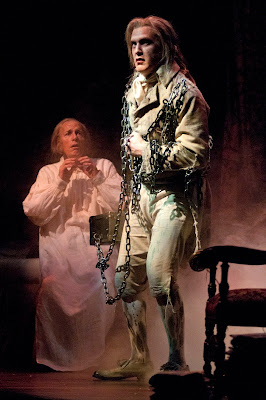 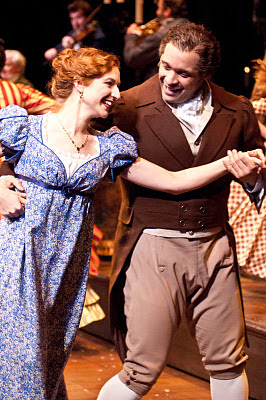 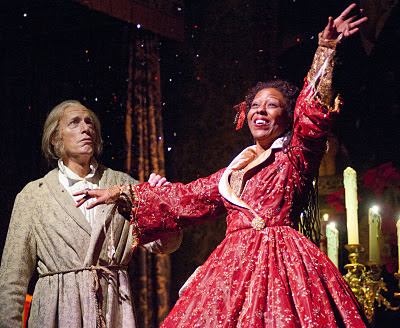 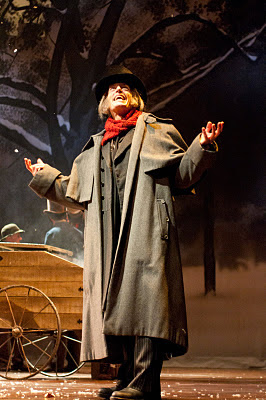 Larry Yando is back as Ebenezer Scrooge in the Goodman Theatre’s 34th annual production of Charles Dickens’ A Christmas Carol, and all is right with the world. Or, as the character Tiny Tim (played charmingly by nine-year-old Roni Akurati), would say, “God Bless Us. Everyone!”

As conceived by Goodman Theatre Associate Producer Steve Scott, who makes his fourth turn at the helm since 2007, this is a leaner and more poignant “Carol” than years past. The set is minimal, with a bleak, snow-covered forest serving as the backdrop rather than the traditional hustle and bustle of a village square. The actors, fulcromed by Yando’s spot-on, eloquent performance, hone in on the sociological and psychological underpinnings of Dickens’s timeless preachments on self-righteous selfishness and the saving grace of love, kindness and goodwill toward all mankind.

The premise for “A Christmas Carol” is set out from the opening line. “Marley was dead,” the story begins, spoken from the mouth of a member of the street chorus at the opening curtain and repeated by Ebenezer Scrooge in the establishing scene between he and the hapless Bob Cratchit (Ron Rains, returning in his fifth year in the role). It is Marley’s Ghost (a nimble and frightful Nathan Hosner) that haunts Scrooge from the face of his doorknocker to the sanctity of his bedchamber. He is warned that he will be visited by three ghosts- the specters of his Christmases past, present and future. Of the three, it is Christmas Present (Penelope Walker) who proves to be the most luminous and telling in her portrayal. She is absolutely brilliant!

There are sterling performances throughout. Joe Minoso, with his eloquent manner and stentorian voice is compelling as Scrooge’s nephew, Fred. Ora Jones is effusive as Mrs. Fezziwig and Karen Janes Woditsch gives emotional depth to the long-suffering character of Mrs. Cratchit. Ron Rains is an expert at comedic timing in the role of Bob Cratchit.

The onstage musicians, particularly the nimble-fingered “fiddle” player, add a sparkle to the proceedings early on. One gem of a scene is the dance at Fezziwig’s warehouse. Production Stage Manager Alden Vasquez and Stage Manager Jamie Wolfe get deserved credit for the execution of this exceptional production with Set Design by Todd Rosenthal and excellent Costume Design by Heidi Sue McMath, who captured the taciturn look of the Dickens era exactly. Sound Design by Richard Woodbury and Lighting Design by Robert Christen worked hand-in-hand to emphasize the dramatic arc of the story with precision. Original Music Composed by Andrew Hansen told the story in concert with the superb dialogue in the story Adapted by Tom Creamer for the Goodman stage. This is a top-flight production that brings the social message of the Christmas Holiday home in an entertaining, yet truthful manner. In light of the Occupy Wall Street demonstrations that are sweeping the country and the uncertainty of the economy this Holiday Season, A Christmas Carol presents a sobering message in a wholly entertaining and delightful manner that has become a staple among Holiday family experiences. For tickets and information, visit GoodmanTheatre.org.

Posted by Dwight the Connoisseur at 9:02 PM