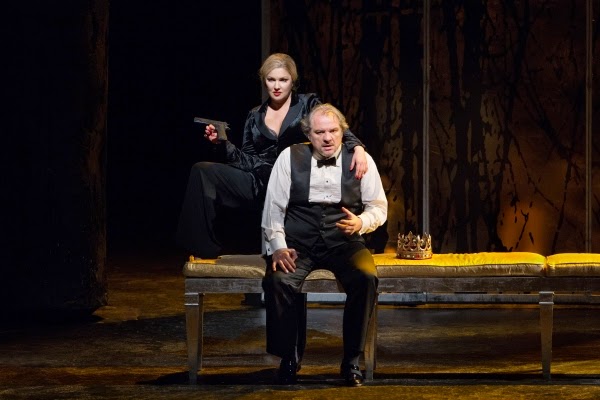 Anna Netrebko and Zeljko Lucic as Lord and Lady Macbeth 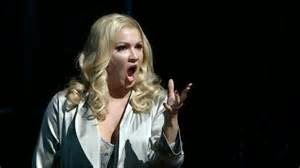 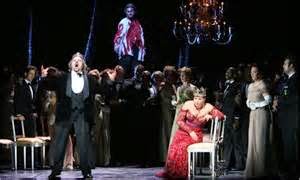 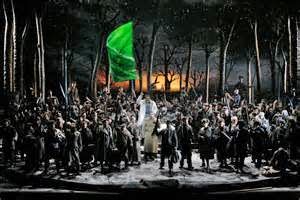 English troops gather at the border to invade Scotland in Act III
Below: Lady Macbeth leads at toast at her husband's ill-fated coronation banquet of Act II 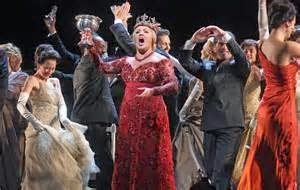 NEW YORK--Anna Netrebko affirmed her status as the reigning Metropolitan Opera soprano in her recent performances as Lady Macbeth in Verdi's operatic adaptation of Shakespeare's Macbeth in performance at the Metropolitan Opera House Wednesday October 15 and Saturday, October 18 and Live in HD at select movie theatres globally in Encore Performance  Wednesday, October 15 at 6:30pm local time. Check metopera.org or fathomevents.com for theatre locations.

In her early childhood days in her native Krasnodar, Russia and later at the Leningrad High School of Music, Anna Netrebko's expressed mission was to become an actress. Her early inclinations served her with stunning success in this brilliant production directed by Adrian Noble and conducted by Met Principal Conductor Fabio Luisi. Netrebko's soaring high notes and compelling dramatic performance propel her into the ranks of the Met's finest, joining such hallowed names as Callas, Sutherland and Price. By her own choice, Netrebko elected to portray Lady Macbeth as a blond, ala Marilyn Monroe, giving her character an irresistable sensuality and sexual power, while portraying her with the cunning and stealth of a she-lion. With German bass superstar Rene Pape as the mudered Banquo (he appears as a blood-spattered ghost throughout much of the opera), Serbian and Montenegran baritone Zelijko Lucic in the title role and Maltese tenor Joseph Calleja as Macduff, the emerging victor, this is the Met's best, and most satisfying offering to date this season. The sustained applause and bellowing "Bravos" throughout the performance attest to the unanimously positive response.

Netrebko reached deep into her subconscious to realize the steely ferocity and overt evil at the center of her character. "There's a bit of this dark side in all of us," she told backstage interviewer and fellow Russian soprano Anita Rachvelishvili, this year's Carmen. "I'm always distrustful of people who are nice all of the time, because it means they are hiding this dark side underneath.That means ALL of you," she said, playfully pointing her finger at the camera toward the theatre audience.

In addition to her superb acting, Netrebko proves her mastery of her vocal art. She is able to invest a sultry sensuality in her lower range while scaling to the heights with an unwavering, gorgeous tone. Her high notes gleam with crystalline clarity that ring, even into the outer lobby of the Metropolitan Opera House.

Her "mad" scene in Act IV, in which she sleepwalks precariously over a series of chairs left over from the previous evening's coronation banquet, which was interrupted by the specter of Banquo's ghost, who the Macbeth's schemed to murder in order to gain the throne, is the central triumph of the opera.
Her restrained performance added to the emotional power of the scene. Her sustained high D-flat, sung in perfect pianissimo as she stumbled into the darkness of her chambers, heightened the drama. I only wish that the audience had held off on its loud  and lengthy adulation to allow the sublime feeling of the moment to sink in.

Rene Pape lent his rich, molasses-tinged baritone to the role of the assassinated Banquo. He managed to maintain his character's dignity, although he is forced to appear as a mute, fake blood-soaked spectre that only the guilt-ridden Macbeth can see in Act III. Pape is a veteran of the role, having performed it since 1991. Likewise Calleja, as Macduff, has performed the role since 1997, in his debut at the age of 19 in his native Malta. "No doubt many of my countrymen and women are watching me in my homeland right now," he said proudly, during the backstage interview at intermission during the Met Live HD movie-cast. Both he and Pape extended greetings to theatre audience in their native languages. Part of the beauty of Live In HD!

The chorus, as prepared and directed by Met Chorus Master Donald Palumbo, did a stellar job of executing the opera's lengthy and dramatically and vocally diverse scenes. The witches, dressed as sort of gentile bag ladies, stole the show.  Mark Thompson's minimalism gave hints of the settings, with the blackened outlines of trees denoting the forest and black, velvet covered columns with ribbons of white light and a lone chandelier depicting the castle. His costumes, which went from Stalin-esque military uniforms for the royalty, to Che Guevara berets and leather jackets for the rebel kinghts, clearly delineated the sides of good and evil in present-day terms.  The minimal sets and costumes allowed the dramatic singing of the actors to shine through as the main event.  Live HD Director Gary Halverson of TV's Two and a Half Men did his usual stellar job of realizing the production for live transmission.  See it all in an Encore Presentation next Wednesday, October 15, at 6:30pm at a theatre near you!


Posted by Dwight the Connoisseur at 12:54 PM