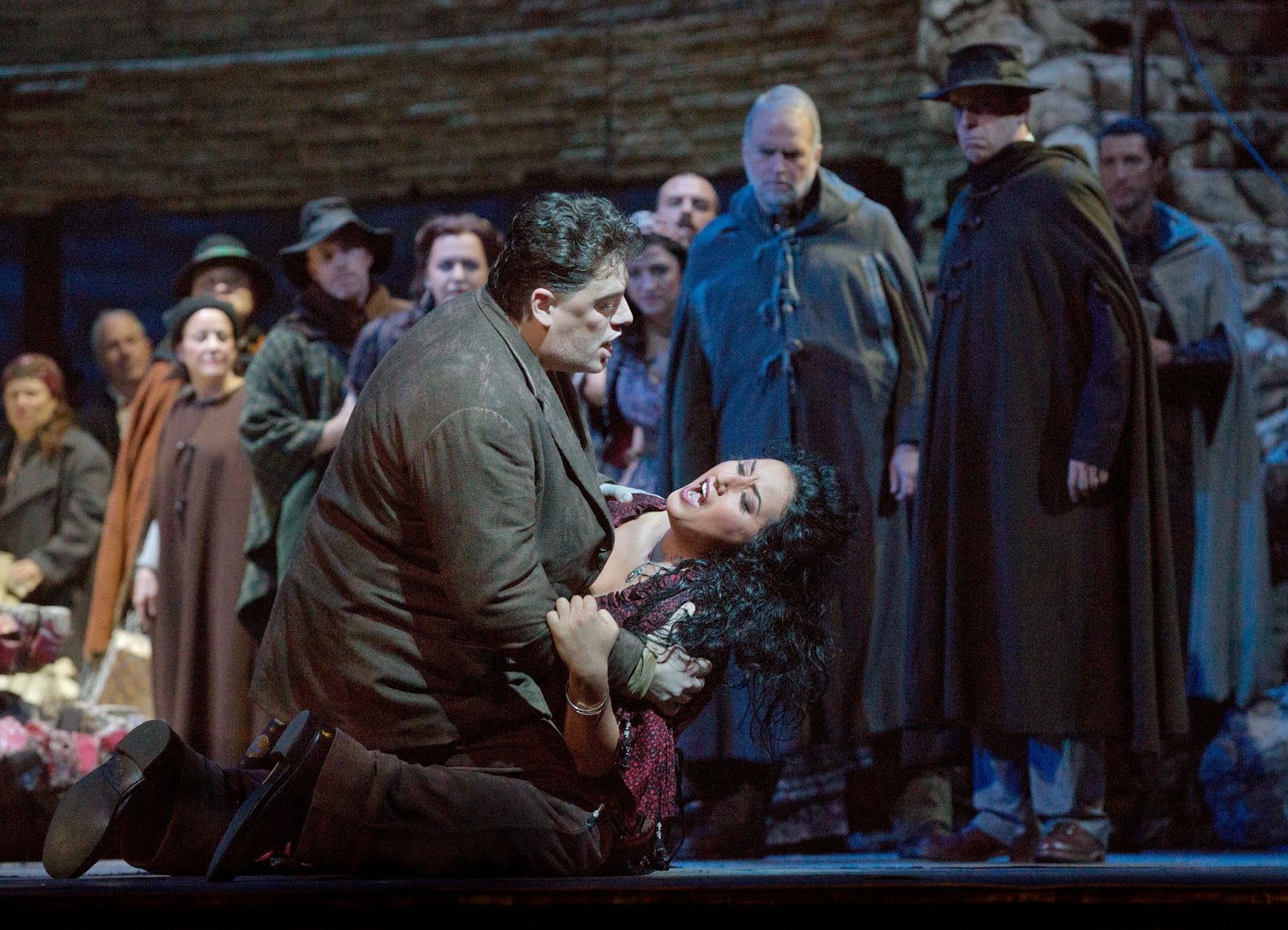 Aleksandrs Antonenko and Anita Rachvelishvikli as Don Jose and Carmen 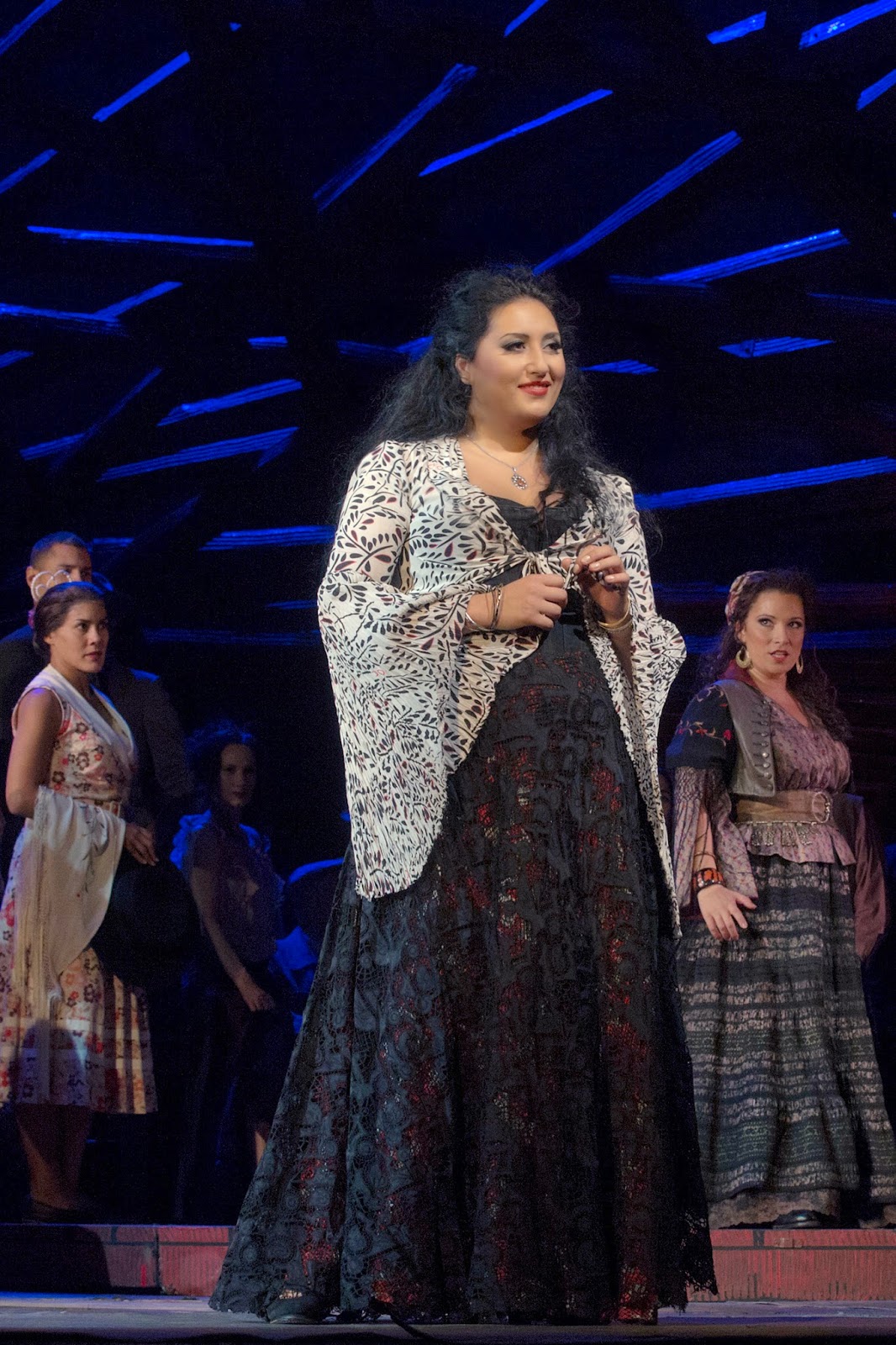 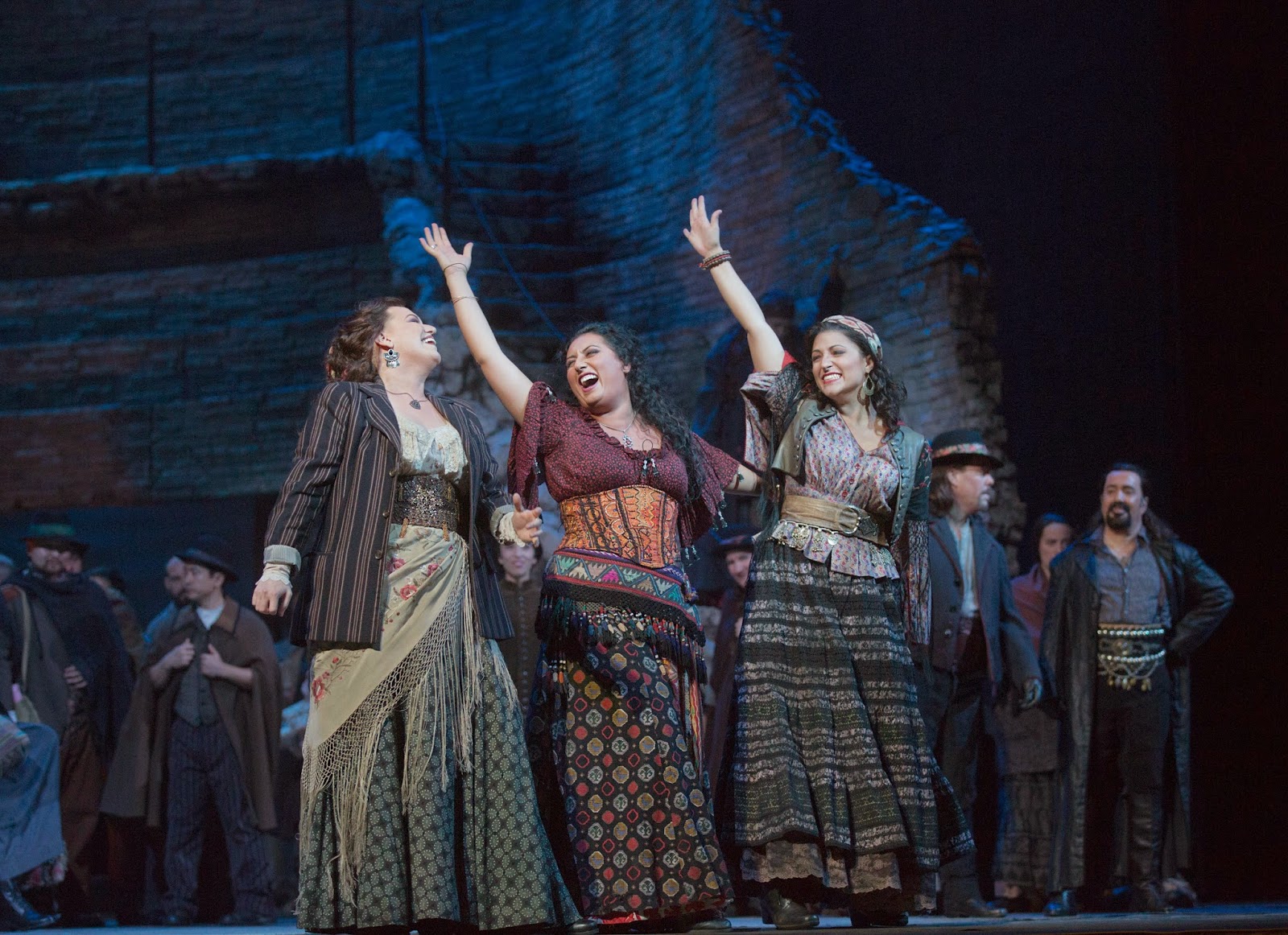 Director Richard Eyre strikes again with a sizzling production of Bizet's Carmen.  Mezzo Soprano Anita Rachvelishvili is red-hot in the title role, portraying the gypsy temptress with sultry magnetism. She gives flesh and blood to her character, both with her physical sensuality and her soaring, seductive voice.

Aleksandrs Antonenko is her jealous lover, Don Jose, who risks everything; his rank, honor and family, in desperate pursuit of the wanton gypsy. Ildar Abdrazakov is the vainglorious bullfighter, Escamillo, who puts his personal stamp on the famous "Toreador" aria.  Pablo Heras-Casado's conducting of the beloved score is spot on, emphasizing one recognizable melody after another with a vitality that makes it seem that its your first time hearing the all-too-familiar tunes. No matter, the action on the Metropolitan Opera stage unfolds with an almost cinematic scope and pace. Of all the operas presented this season Live in HD, this one plays most like a film in terms of rapid fire plot pacing and eruptive emotions.

Richard Eyre's staging and the spare settings evoke the mood of the scenes without cluttering up the stage with props and backdrops. The action and the singing carry the story and Eyre allows all of the spine-chilling drama Bizet infused into his masterpiece, to bubble to the surface. Particularly effective is the scene set in the Gypsy's hideout. The lighting and effect of the chorus members descending an arced stairway from high above the stage to their darkened, candlelit lair below, effectively coveys the feeling of subterfuge and danger.

The story moves like a steamroller, from Don Jose's headlong infatuation with Carmen to his desperate attempts to possess her, to his eventual descent into military desertion and murder. Rachvelishvili is perfect as the headstrong, passionately independent Carmen. No man will posses her or fetter her freedom, even at the cost of her life. It is a bravura performance and one which commands your attention from start to finish. There are some who have not seen this opera, so I won't ruin the finish. Suffice to say that the final face-off between Carmen and Don Jose as sung by Antonenko and Rachvelishvili is palpable and riveting. Their delivery raises the level beyond the mere dramatic to become a heightened state of reality. Don Jose emerges from the shadows outside the bullring where Escamlio is fighting the bull. He is a desperate fugitive. Carmen, defiant as ever, confronts him. Richard Eyre's staging of this scene is masterful and the dramatic singing of the twoi stars is sublime.  Carmen screens this Saturday, November 1 Live in HD at theatres around the globe at 12:55pm ET with an Encore Presentation Wednesday, Nov 5 at 6:30pm local time. Visit metopera,org or fathomevents.com for theatre locations.

Posted by Dwight the Connoisseur at 10:31 AM