NEW YORK--British director Mike Leigh( Secrets and Lies 1996,  Vera Drake 2004, Another Year 2010) has done it again! His latest masterpiece is the biopic "Mr. Turner," which depicts the last 25 years of the life of the  eccentric British landscape artist J.M.W. Turner. Regarded as one of the greatest painters in the world by those in artistic circles, but largely overlooked by the general public, Turner's work and his use of light, texture and tone, predates the techniques and styles of the Impressionists several decades later.

At the film's U.S. Premiere at the New York Film Festival, audiences were given an opportunity to revel in the sheer beauty of the cinematography of Cannes Film Festival Vulcan Award-winner Dick Pope and the masterful direction of Mike Leigh, which earned the film  a Palme d'Or nomination and the superb acting of Timothy Spall as the enigmatic Joseph Mallford William Turner (1775-1851), which won him the Best Actor award at Cannes.

Turner is personally, at once a wall of secrecy and an enigma wrapped in a riddle, yet Mike Leigh probes beneath the surface of this complex character to reveal his flaws and laughable humanity. He is deeply affected by the death of his father, William Turner (1745-1829), played by Paul Jesson. We learn that Taylor's mother died in an insane asylum when the artist was still quite young and that his sister died at age 5, leaving him an only child. These tragic events obviously had a profound effect on Turner, because he never had a solid, open relationship with any woman over the course of his life. At best, they were tangential, and at times, cruel. His faithful housekeeper of 4o years, Hannah Danby(1786-1853), played exquisitely by Dorothy Atkinson, who turns in the best performance in the film, other than Spall as Turner. She died two years after Turner, but was doggedly devoted to him in spite of his abusive treatment.  For much of the film, she is largely invisible to him, except for his sudden and violent sexual exploitation of her. In one scene, we see him attack her viciously from behind, then leave her hanging alone in his study without  so much as a kiss.

" We know very little about her," said Dorothy Atkinson at the New York Film Festival news conference. "We do know that she was fantastically devoted to him and that she had a horrible skin condition (psoriasis)." Early in the film, we meet Sarah Danby (1760-1861), played by Ruth Sheen, Turner's first mistress and mother of his two illegitimate  daughters, who are seen paying a pop-in visit to Turner in his studio, in hopes of having him own up to his fatherhood responsibilities. Turner loudly rebuffs them and kicks them out.

Later in the film, he develops a relationship with Sophia Booth ( played by Marion Bailey), his landlady at the seaside cottage where he rents a guest room to gain inspiration for the seascapes which will earn his fame. Turner's husband, a mariner, dies and the two soon begin a relationship in earnest. Turner visits her often in his search for inspiration. In fact, in the course of one of his steamboat trips to visit her, he has himself lashed to the mast of a ship in order to experience first hand a violent snowstorm at sea, which will later become the subject of one of his paintings. We see their relationship grow over time, perhaps the only gentle and fulfilling relationship with a woman that he will ever have, although it is largely played out in secret. He practically dies in her arms near the end of the film.

The look of the film was created with excruciating attention to detail by cinematographer Dick Pope. He discussed his methodology at length at the New York Film Festival news conference. "We were trying to evoke what he saw,"Pope said, "looking through him, through his eyes, in terms of camera movement.

"A lot of the vantage points in the film are Turner's, looking at what he is observing."

The look of the film is stunning, almost duplicating the landscapes and seascapes that Turner painted. That observation is no accident, according to Pope. "I studied Turner's color palette, " he told the rapt audience of news reporters and film reviewers,"We spent a lot of time at the Tate Museum in London, where the majority of Turner's paintings are hung (Turner was adamant that his paintings be made accessible to the general public for free. In a key scene in the film, we see him turn down what would today be millions of dollars from a wealthy nobleman, because he refused to sell his paintings to private collectors. Instead, he bequeathed them to the public trust.) "The Tate proved to be a fantastic resource for everything Turner-even to the paints he used. We looked at that, and the film is colored in very much the same palette of what Turner was using at the time." In one of the film's early scenes, we witness Turner meticulously going through the color inventory of a local paint shop, selecting the pigments that he will later use for his masterpieces. It is an exhaustive process, which Pope faithful replicates. "We took that experience to heart and used the paints that he was buying in the color shop as our own palette in the film." The effect is visually stunning.

One of the scenes that is texturally the centerpiece of the film, is one of Turner's most famous paintings, "The Fighting Temeraire." In the film, Pope and Leigh shoot a scene in which they imaging Turning viewing the Temeraire being towed away on the River Thames to be dismantled as scrap. When the scene opens, we at first think that it is one of Turner's painting, then the camera pulls back to reveal that it is in fact, reality, with Turner and his aides observing the majestic ship being towed while floating close by in a skiff. "We shot that scene very late in the evening, just on the cusp of sunset," Pope revealed. "We were blessed with the most fantastic sunset and the actors and the whole landscape was viewed in this beautiful light. It was filmed almost in the same place as where the painting was depicted. Those magical guys back in London created the moving Temeraire ship in CGI, which I hope you found completely believable, because I did!"

The rest of the film was likewise faithful to Turner's color palette and to the settings for the story. Everything was shot on location where the story unfolded. "We  did a lot of studying, Mike and I, for almost everything we shot," Pope explained. "We were blessed with wonderful weather last year. It was a fantastic summer in Margate, where we shot it. We first went one way, then the other, trying to capture the best light. We did that with the interiors as well. For example, in the house that Mrs. Booth lives in (Turner's final mistress), the windows--a lot of people come up to me and say, 'That's CG out the window, right?' I say 'Like Hell it is! It never is on one of Mike's films. The house that Mrs. Booth had behind her when she was in that room when she was eating supper was the actual view out the window shot at the right time of day."

Mike Leigh, the director, summed it up best. "The great source of reference for the entire film, of course, is Turner's work. The look of the film comes out of a sense of us trying to interpret, visually, his paintings, but also the spirit of the two periods in which the film takes place, Georgian and early Victorian."

A key figure in the film is the famous British art critic John Ruskin, himself the subject of a biopic to be released this year. He is played terrifically by Joshua McGuire as a somewhat effete, self absorbed dilatant consumed with his own self-importance and who loves to hear the sound of his own voice, which is grating to others because of its high pitch and his inability to pronounce the letter "R."  "Ruskin was, to put it bluntly, a real prick," Leigh explained with gusto. "But in the end, he turned out to be Turner's greatest champion." Ruskin's praise of Turner's work was reflexive, in terms of its effect on his career as an art critic. In writing about Turner, Ruskin found his "voice," mixing his critical observations with discourses on aesthetics, science and ethics. So cemented had become their relationship, that Ruskin devoted himself to cataloguing the nearly 20,00 works Turner had bequeathed to the British nation.

Below: Two views of the art critic John Ruskin 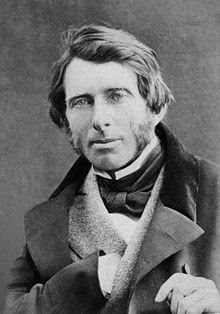 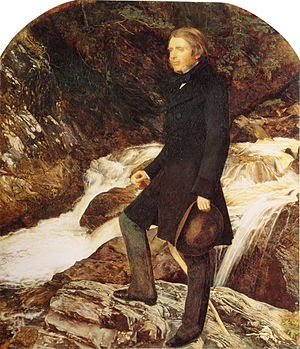 Below: Scenes from the New York Film Festival news conference 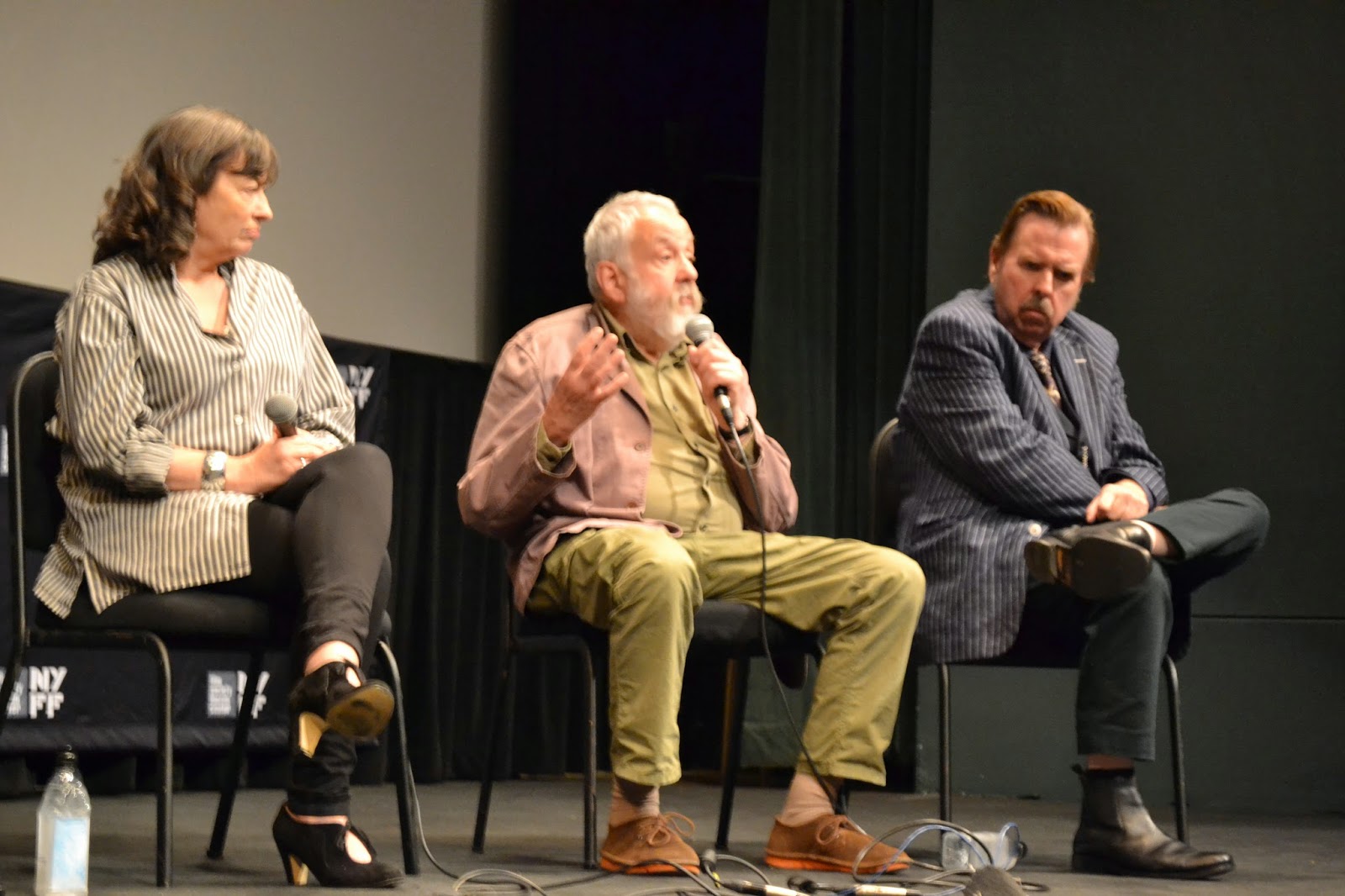 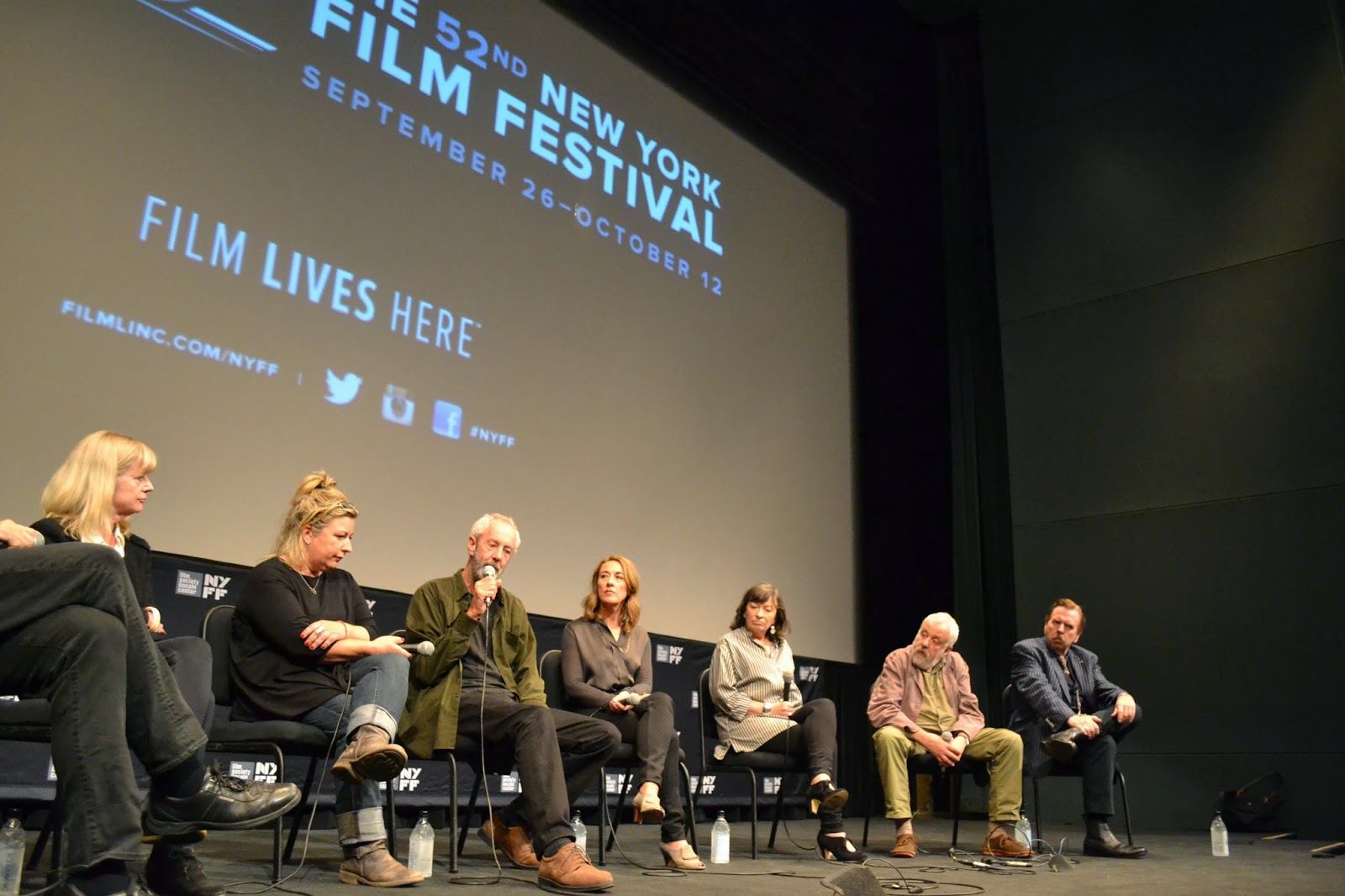 The cast of Mr. Turner at the NYFF news conference 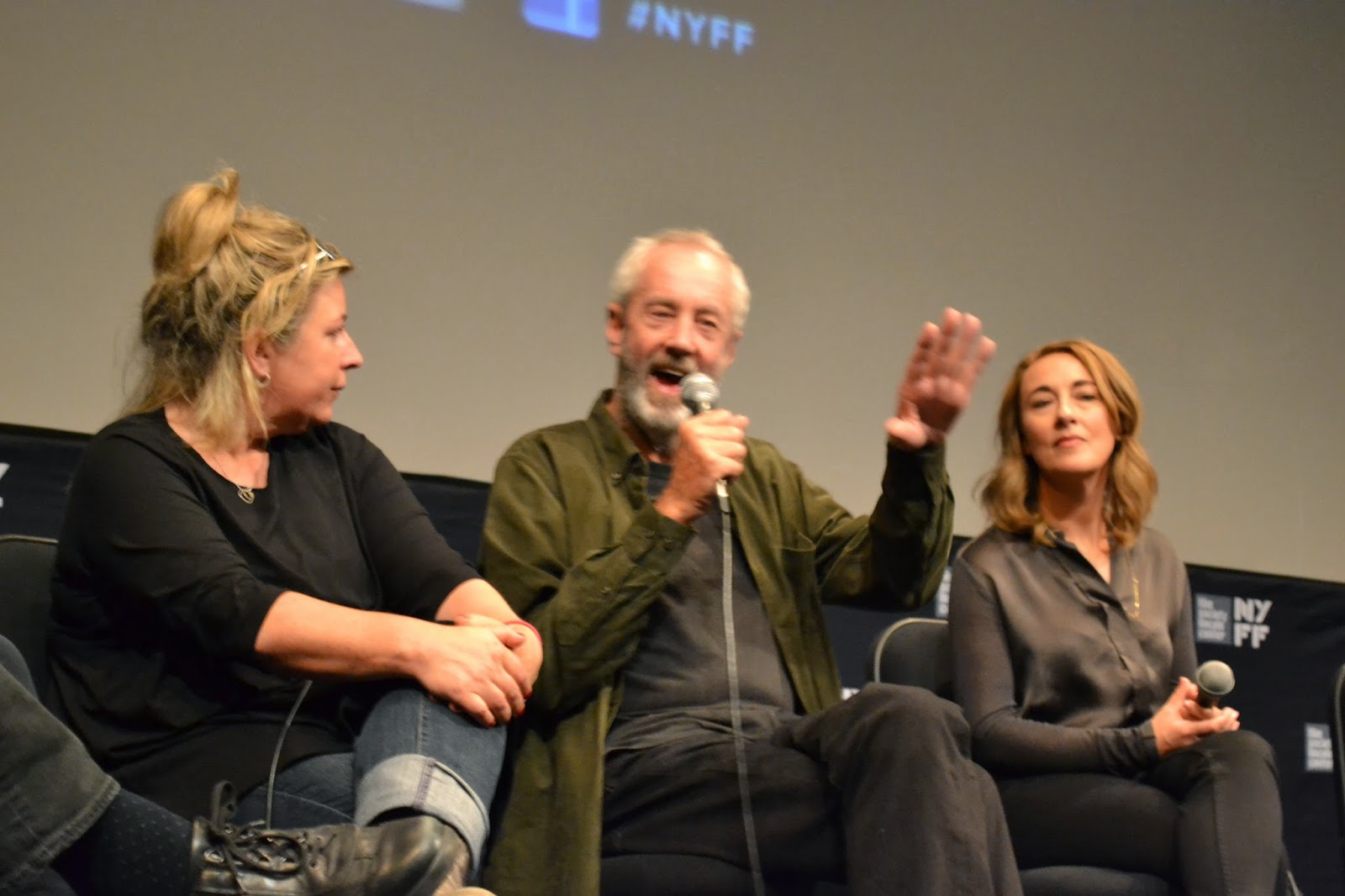 Cinematographer  Dick Pope explains the color palette of the film

Below: The 'class photo' for Mr. Turner at the New York Film Festival news conference 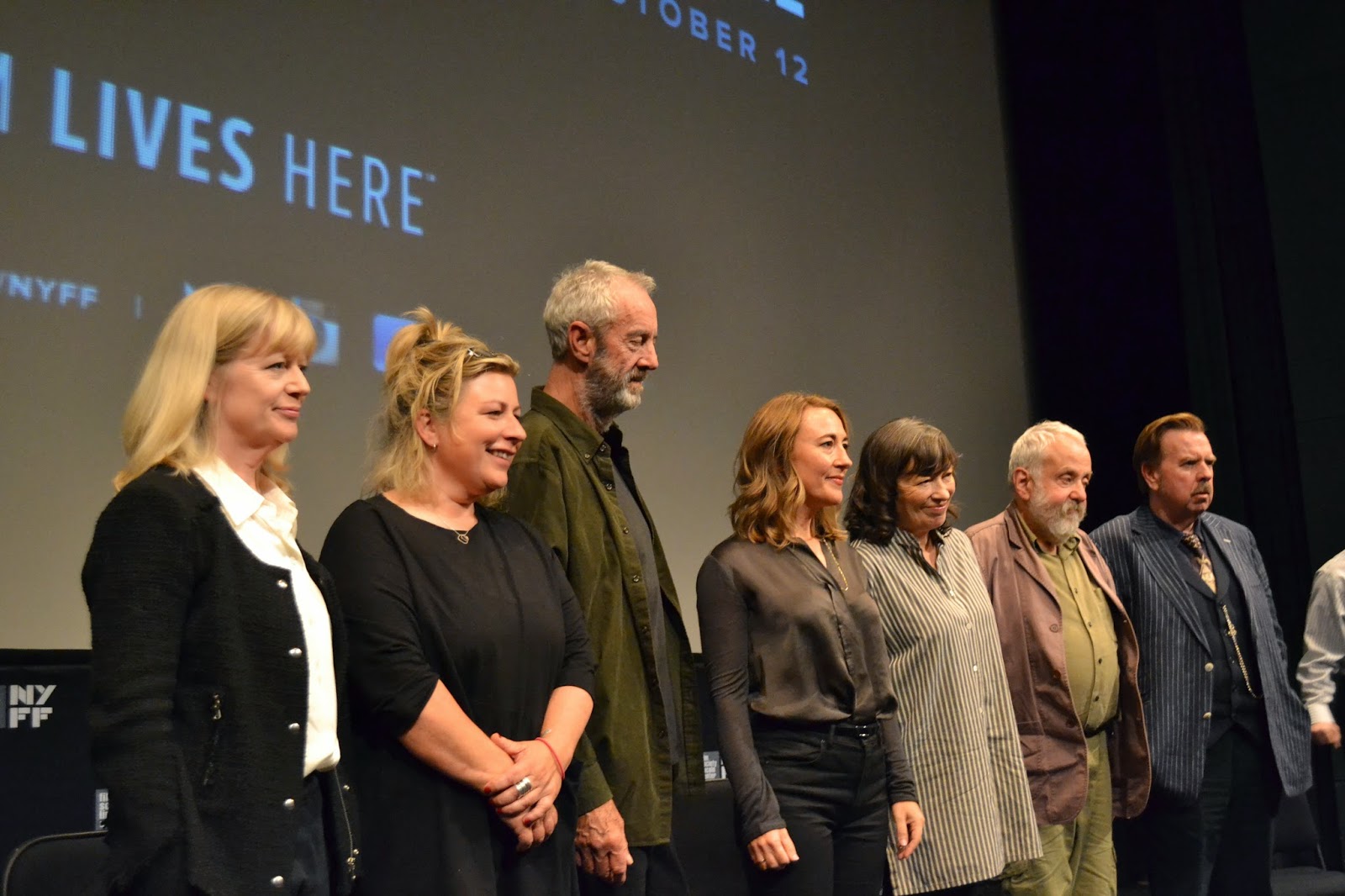 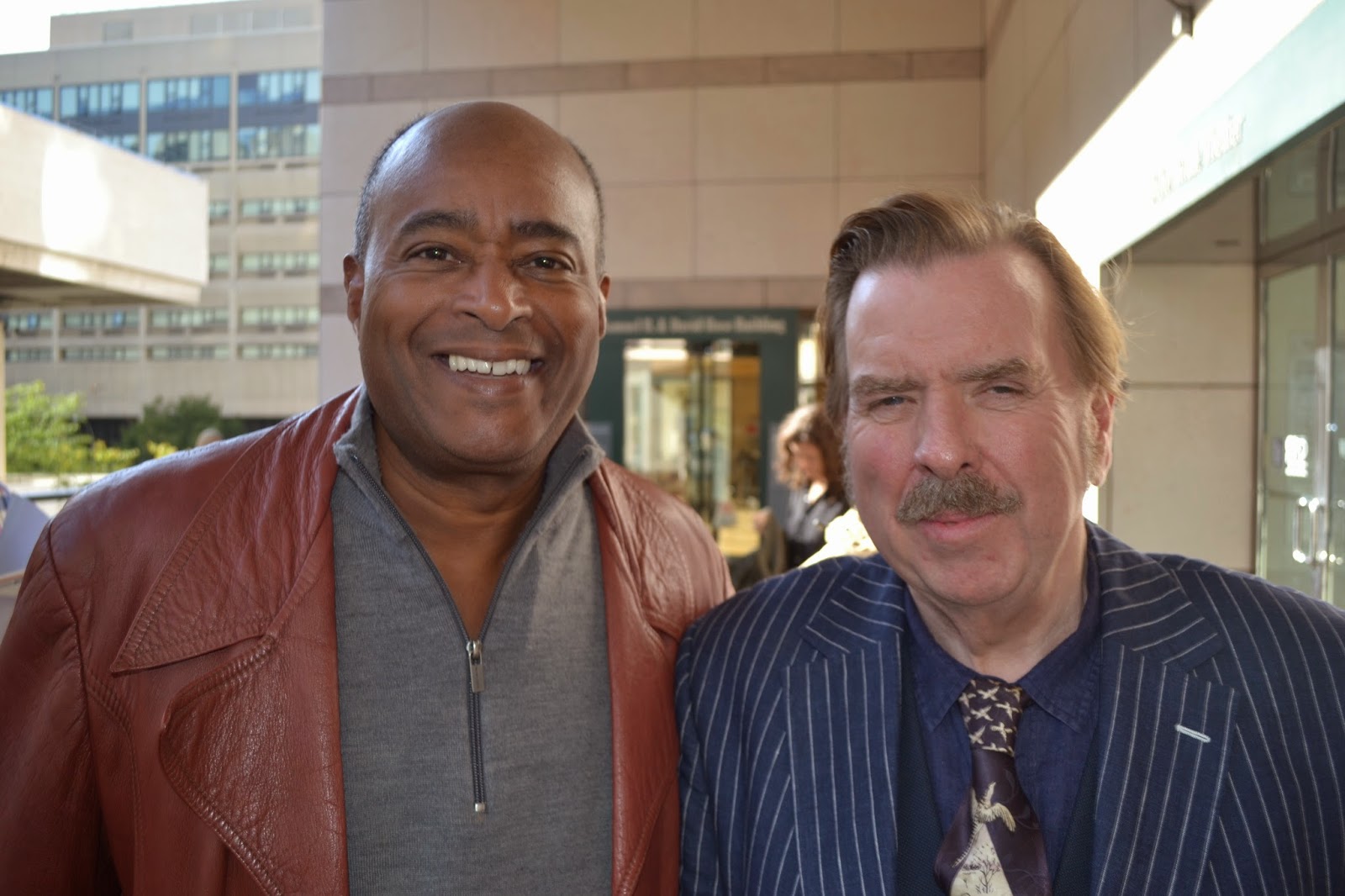 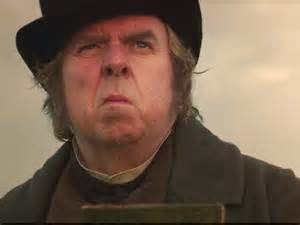 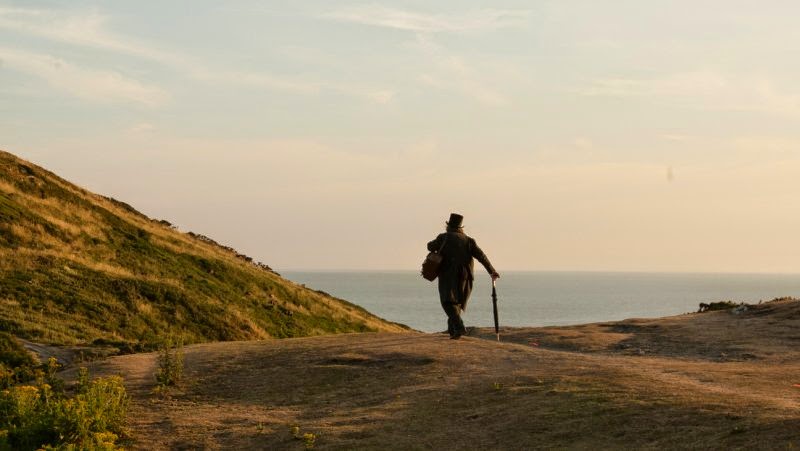 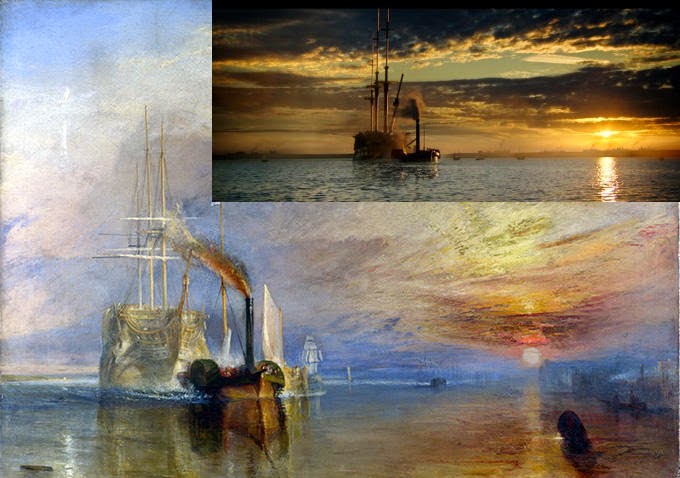 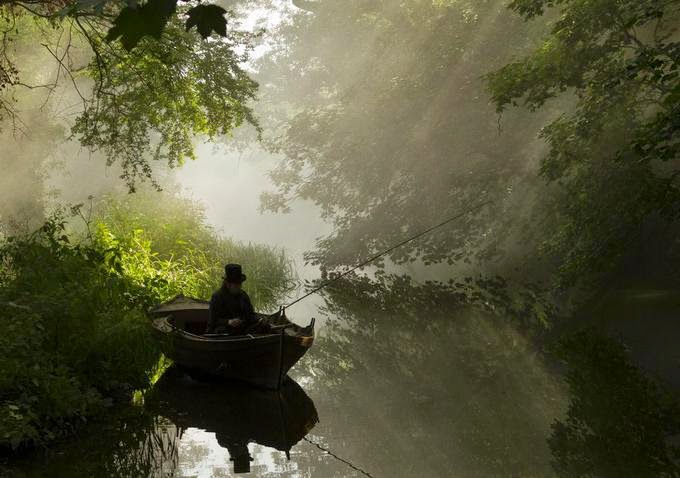 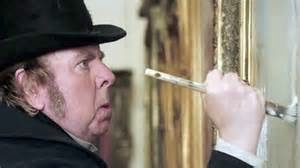 In one scene, we see Turner appear at one of his showings at the Royal Academy of Art, where he is begrudgingly accepted as member because of his standing as a superstar. We see him blithely wandering about the room, critiquing the work of his colleagues and, uninvitedly, adding color accents to their work, a dash of red here, a swirl of white either spat from his mouth or smeared with his hand, which leaves them aghast. He is even seen smearing a grey funnel cloud just off center in the swirling sea storm  depicted in one of his own paintings. Instead of ruining the work, he made it better, giving it a new and previously unseen perspective.

Another scene depicts Turner's friendship with Mary Somerville (1780-1872), played by Lesley Manville. She is a scientist who gains renown for her work in experiments with refracted light at a time when the notion of women engaging in such work was not condoned. Her experiments as shown in the film are an odd precursor to a later scene in which Turner is exposed to the new phenomenon of photography, which similarly uses refracted light to create photographic images. It is one of the more humorous scenes in the film with Turner harrumphing that he wonders if this new contraption will replace his use to society as a painter.

Don't be turned off by the scholarly subject matter of Mr. Turner, This is a must-see film, full of beautiful scenery, sensuality, humor and touching moments of humanity that will make you cry. It is Mike Leigh's and David Pope's Valentine to a great, unrecognized hero to the world of art who has still much to say about the environment, both natural and emotional, that we live in today.

Posted by Dwight the Connoisseur at 8:06 AM