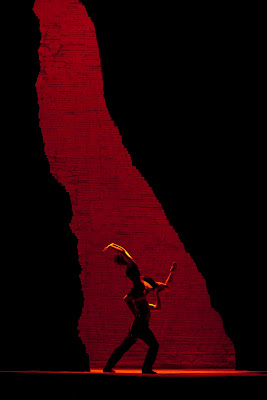 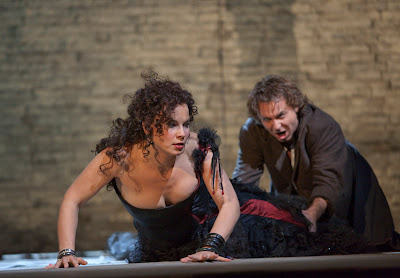 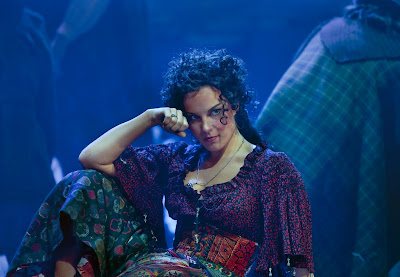 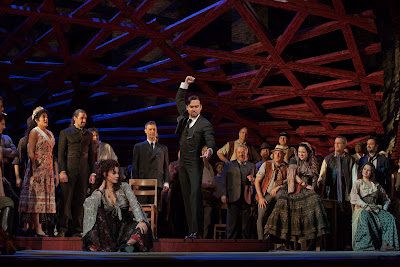 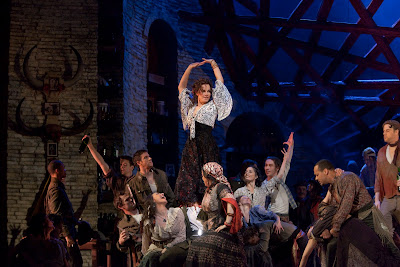 The first thing that greets the eye in Metropolitan Opera’s new production of George Bizet’s Carmen, to be seen by a worldwide audience Live in HD, Saturday, January 16 at noon, is a bright red, illuminated slash of red that is contrasted against a black curtain, running floor to ceiling on the Met stage. A solitary dancer undulates to the strains of the opera’s overture, under the deft conducting of Canadian conductor Yannick Nezet-Sequin. A female dancer later joins him as solo dancers Ashley Tuttle and Keith Roberts make their Metropolitan Opera debuts in a series of dance sequences that act as a precursor to the stormy, intertwining relationship of the titled protagonist, Carmen, and her hapless prey, the dutiful, but headstrong lieutenant, Don Jose.

Latvian mezzo-soprano Elina Garanca is the consummate Carmen. Her sultry good looks, honey-dripping voice and seductive moves give her character a modern edge. In Garanca’s portrayal, Carmen is more than a voluptuous, castanet-clicking femme fatale. She is a complex, fiercely independent woman who is hell-bent on forcing her will, regardless of the cost to herself or others. She is a predator at heart, with an insatiable appetite. Her character, as so expertly unfolded by Garanca, is more like a serpent than a lioness, undulating in hypnotic motion, her shiny, ornately patterned surface mesmerizing her victims with its brilliance. In this case, Don Jose, sung with just the right mix of resolve and vulnerability by French tenor Roberto Alagna, is lured into her venomous embrace. Although he realizes that her bite is fatal, he descends into the maddened hallucination of ecstasy that all snakebite victims experience before they finally succumb. Instead of death, Don Jose descends into madness.

Georges Bizet shocked the Opera Comique of 1875 Paris with his dark, raw, socially abrasive opera, but his bad-girl heroine would have been right at home in today’s TMZ-dominated world of Britney Spears and Lindsay Lohan. In Bizet’s time, French society was in the midst of a mass hypnosis of hypocrisy, maintaining a genteel bourgeois veneer at its surface, while practicing an amoral indulgence of sex and marital duplicity underneath. Carmen pulled back the lace curtain. Society was simultaneously repulsed and transfixed, much like Don Jose.

With that in mind, Garanca takes her characterization to the parapets, brandishing a bloody thigh with an aplomb that would make a vampire swoon and singing her show-stopping arias with abandon.

Carmen is a showcase for mezzos, but Garanca takes it a step further, turning down the heat at key moments to reveal the character’s sinister underpinnings, then unleashing all of her considerable powers at just the right moment. The effect is mesmerizing.

Carmen delights in her Svengali-like control over Don Jose, drawing him in, then casting him aside at will. That only intensifies Don Jose’s will to possess her.

Escamillo has his bull. Carmen has her Don Jose. So intoxicated is Carmen by her control over Don Jose, that she drives him straight to the gates of Hell even at the cost of her life.

Tenor Roberto Alagna is a perfect Don Jose. He is the dutiful lieutenant whose nose is turned by the wily Carmen. His sylvan voice is a joy to behold. He also displays just the right amount of vulnerability in his portrayal of the gullible Don Jose.

Carmen blows his straight-laced character away. So much so that he abandons his duty to his country and his mother for her gypsy camp and its outlaws. In his touching arias with the peasant girl, Micaela, sung exquisitely by Barbara Frittoli, Don Jose learns from her of the fragile health of his mother and her deep love for him. He is moved, but apparently not enough, for he later casts both aside in headlong pursuit of Carmen. In an instant, his bright future is obliterated and Don Jose finds himself a fugitive, living among the very people he despises.

Set and costume designer Rob Howell creates a decadent looking world of crumbling hemispheres that move fluidly from a chain link fenced military headquarters to Seville’s lively town square, Lillias Pastia’s tavern, the Gypsy’s desolate mountain retreat and finally, the cold exterior of the bullring in Seville. The contrast of Carmen’s demise at the hands of Don Jose outside and Escamillo’s conquest of the bull inside is brought out with stark clarity in the brilliant staging.

Carmen hits the big screen Live in HD in theatres around the world Saturday, January 16 at noon Central Time with an Encore performance Wednesday, February 3 at 6:30pm. Met Live in HD can be seen locally at Seven Bridges Cinemark at Route 53 & Seven Bridges Drive in Woodridge. For tickets and information, visit www.metoperafamily.org/metopera/broadcasts or www.cinemark.com.

Posted by Dwight the Connoisseur at 12:24 PM