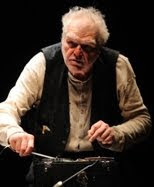 There is a moment when an artist transcends all earthly boundaries and ascends to a higher plateau. They enter a privileged sector of consciousness that is theirs alone to experience. Athletes call it being “in the zone.” Jazz musicians call it “in the pocket.” A fortunate few hundred theatre lovers shared in this transcendent experience at Goodman Theatre as two-time Tony Award-winning actor Brian Dennehy reached the pinnacle of theatrical achievement in his virtually one-man double bill of two, one-act plays, Eugene O’Neill’s Hughie and Krapp’s Last Tape by Samuel Beckett. The two roles could not have been more opposite, yet Dennehy effortlessly assumed the persona of each, creating an indelible experience.

Goodman Artistic Director Robert Falls directs Hughie and award-winning Canadian director Jennifer
Tarver directs Krapp’s Last Tape, recreating her successful production at the Stratford Shakespeare Festival two seasons ago. Broadway and off-Broadway veteran Joe Grifasi reprises his role as the night clerk in Hughie, which he performed at the Stratford Shakespeare Festival and Trinity Repertory Company. Dennehy was once quoted as saying “Joe Grifasi is the only person who can play this part!” We quickly see why. His deadpan expression and sense of timing are extraordinary. The chemistry between he and Dennehy is like watching Miles and ‘Trane jam at Birdland.

The design team of Set Designer Eugene Lee, Costume Designer Patrick Clark, Lighting Designer Robert Thomson and Sound Designer Richard Woodbury, does a superb job of setting the scene of Hughie in a dingy flop house in the distant, sepia-toned past and Krapp’s Last Tape in the desolate landscape of a man’s final mental anguish.

Besides Dennehy’s expert craftsmanship, the two plays also share another common factor; they are both the latter-day works of two of the theatre’s acknowledged geniuses. Hughie was written late in O’Neill’s career, Krapp’s Last Tape is Beckett’s final effort.

In Hughie, Dennehy plays the gregarious, hard-drinking, small-time gambler Erie Smith. Down on his luck and just off a bender, he returns to the seedy Times Square SRO that has been his habitué off and on for the past dozen or so years. Both had seen better days. Over the years, he had befriended the night clerk, Hughie. The two had developed an unlikely friendship. Even by Erie’s own admission, it was more at his insistence. The night clerk was a family man and non-gambler, reluctant to enter Erie’s world of high-rolling and loose women. But Erie believed that Hughie was his good luck charm and pressed himself upon him. When Hughie died unexpectedly, it sent Erie’s high-flying world into crash mode.

As the play opens, Erie senses a similarity in the new night clerk and his deceased friend. He reaches deep into his bag of tall tales to win him over.

“Say, now I notice,” Erie says, “you don’t look like Hughie, but you remind me of him, somehow. You ain’t by any chance related?” Ironically, the night clerk almost shares the same last name as his predecessor. This is enough to inspire Erie to extend himself, even to the point of making himself look like a fool.

Erie wears his loneliness and desperation like the tired, rumpled suit that adorns his aging body. “I’m 59!” Erie proudly declares. “The dames don’t think I’m a day over 30.” Not even the blank-faced night clerk can contain his amusement. As Erie rambles incessantly, his tales become more delusional. He would be laughable if he weren’t so pathetic. We get the feeling that Erie needs to lie to others and himself in order to make his life seem meaningful, otherwise, its has no more value than the loaded dice he carries in his vest pocket.

Throughout the play, Dennehy brilliantly conveys his character’s sense of alienation and loss, both in his outer, physical world and within himself. Erie is like a huge floating casino cast adrift. Floating from one desolate harbor to the next, he desperately seeks to drop anchor. The new night clerk (Grifasi) practically turns a deaf ear to Erie and his tall tales. We learn that the real Hughie had died only a short time before and, although their relationship was tenuous at best, Erie feels a deep sense of loss. The audience is never sure if the big send-off Erie credits himself with at Hughie’s funeral is real or just another of his exaggerations.

As the night passes, Erie’s wild musings on his gambling escapades finally get the night clerk’s attention. When Erie mentions gambling with hundred dollar chips, the night clerk suddenly comes to life, offering details on his past association with a big time gambler. The two finally become friends, meeting on common ground over the clink of Erie’s loaded dice.

Beckett’s Krapp’s Last Tape is a character study in loneliness and regret at the end of life’s long and rambling road. As the curtain rises, a lone, shaggy grey-haired figure sits behind a spare desk, cluttered with dusty artifacts. He fumbles for a key. Unfolds a rumpled piece of paper found in his pocket and comically, eats a pair to tiny bananas foundering in a desk drawer. It is Dennehy as Krapp, a 69 year old man who each year records a new tape on his birthday, recounting the rather mundane events of his empty life.

I saw this play in Galway, Ireland at the Galway Arts Festival last summer and its obscure metaphors and artistic conceits escaped me entirely. In Dennehy’s deft interpretation, the meaning became crystal clear on so many levels. He was even able to bring a touch of levity to the otherwise dark proceeding with his Marceau-like pantomime. Krapp’s Last Tape is about life’s small, but decisive moments; the road not taken, a love lost. These are not the tidal waves of life’s stormy seas but the quiet ripples on streams that reverberate in our conscience, even unto death.

In his befuddled musings, Krapp stumbles on a tape from his archives. Locked away in a box shrouded with dust, the tape, recorded long ago, speaks to him like a voice from the grave. He listens intently as it emits random, seemingly meaningless thoughts until a passage begins to recount the events of a failed romance. Krapp plays the passage over and over again, letting the words seep in, adding new layers to his mountain of regret. Is he contemplating suicide? The curtain slowly lowers as he, and we, ponders the meaning of his last tape.

Posted by Dwight the Connoisseur at 7:34 PM