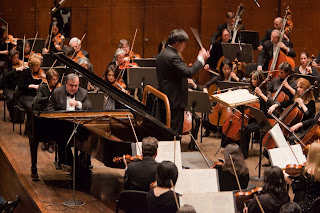 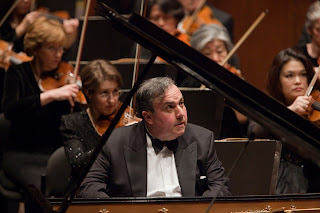 It was evident that something monumental was afoot while walking into the Grand Promenade of Avery Fisher Hall for the appearance of Grammy-winning piano powerhouse Yefim Bronfman with the New York Philharmonic. The Steinway piano was already in place for the program-opening performance of Sergei Prokofiev’s Second Piano Concerto, one of the most technically difficult and harmonically layered of all piano concertos in performance today.

The Russian-born pianist was eminently qualified to lead off the all-Russian program, which also featured Sergei Rachmaninoff’s romantic Symphony No. 2 in E minor.

Bronfman is practically the NY Phil’s pianist-in-residence this season. Following his three-night performance of the Prokofiev, he will play it with the orchestra again on a tour of nine European cities (including London, Paris, Zurich, Frankfurt, Dortmund, Cologne, Madrid, Zaragoza and Barcelona) January 21-February 4. It is the orchestra’s first European tour since Gilbert took the reins as Music Director nearly six months ago.

Bronfman brought an introspection and emotional clarity to the Prokofiev that made it stunning. He literally submerged himself in its dense harmonic landscaped and unearthed its harmonic and psychological richness.

Bronfman’s technique is unparalleled. Unlike many other pianists who are satisfied to merely dazzle audiences with their technical brilliance, Bronfman uses his skill to further enhance the true intent of the composer. Difficult passages become enriched with layers of sonic texture. Quieter passages are imbued with a lyricism that makes them almost song-like. It was especially so in the second movement with its difficult cadenzas, at times lyrical and at others dark and brooding. Bronfman made the Scherzo dance with each note ringing with utmost clarity. His cross-hand technique in the third movement, Intermezzo: Allegro moderato was flawless, with the notes ringing from both hands in perfect balance. The Finale: Allegro tempestoso was a case study in bravura performance. Bronfman immediately jumped into the fray, mounting its storming crescendos and riding them to the crest of a wave of exploding sound. His command of the music was almost superhuman in its intensity and scope. Bronfman’s technical prowess never overshadowed the brilliant writing of the composer.

After a thunderous ovation, Bronfman soothed the teeming masses with a probingly sensitive solo rendition of Schumann’s evocative ‘Arabesque.’

Rachmaninoff’s Symphony No. 2 in E minor is oft times presented as an overwrought, emotionally draining work that has suffered numerous ‘unkind cuts’ over the years, paraphrasing Shakespeare. Its arching, achingly romantic theme in the third movement, Adagio, is probably its single most remembered and, ultimately, its most saving, element. Gilbert wisely chose to present the work in its entirety, without cuts. It presented him with a unique opportunity to showcase the ‘new’ New York Philharmonic under his able leadership. The orchestra played with a youthful exhilaration that, combined with the outstanding capabilities of its members and the superb musicianship of its new leader, made for a highly satisfying listening experience. The Rachmaninoff literally bristled with vitality. Gilbert allowed the full sweep of its vast orchestral landscape to play out before our senses, making a cohesive tonal tapestry out of its seemingly disjointed musical threads. By allowing its inner voices to rise to the surface in the second strings and woodwinds and emphasizing its recurrent themes that bubbled up in the brass section at key moments, he gave the symphony a structure and a firm melodic spine that often eludes conductors. It was Rachmaninoff as interpreted by a conductor who has a refined inner ear for the work’s inherent lyricism and impassioned soul. Europe is in for a mind-blowing experience.

Posted by Dwight the Connoisseur at 2:44 PM