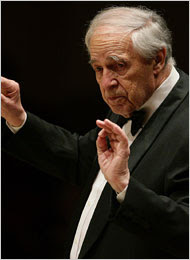 Chicago Symphony Orchestra’s celebration of Pierre Boulez at 85 continues through the month of February. Recent subscription concerts featured the French-born Helen Regenstein Conductor Emeritus in a concert of his own work and the works of two composers whose names are closely associated with his preeminent international reputation, Bartok and Stravinsky. Maestro Boulez has a long and mutually beneficial relationship with the orchestra. For example, in 1995, he was named principal guest conductor of the CSO, only the third person to be so named.

This was an enriching program that was like an exquisite gourmet meal to any connoisseur of great music. Following the conductor leading the orchestra in his own original composition, Livre pour cordes (book for strings), the Bartok Concerto for Two Pianos, Percussion and Orchestra featured two of Steinway Artists’ most eminent emissaries, Pierre-Laurent Aimard and Tamara Stefanovich. The program concluded with the piece de resistance, Stravinsky’s stirringly provocative The Firebird as it was written for the great Sergei Diaghilev and his Ballets Russes in its Complete Ballet form.

Livre pour cordes, a short piece for strings, was written by Boulez just a few years after his arrival in Paris in 1943. He began to write music while a student of the idiosyncratic icon Olivier Messiaen. The student quickly emerged from the shadow of his esteemed teacher with a singularly distinctive musical voice. His string compositions quickly paved a bold, new direction that declared a new voice in the increasingly stagnating world of modern composition.

Boulez and the orchestra played the “book for strings” as if it had been written moments before the performance, with the ink still drying on the manuscript pages. It had a freshness that celebrated new life. Boulez’s rigorous control of tempo increased the tension inherent in its fluctuating tempos. Flashes of rhythmic texture and tonal color were sublime moments of release.

Tamara Stefanovich was angelic in her bright emerald green gown that just barely concealed a stylish pair of black suede stiletto heeled boots. Pierre-Laurent Aimard sat at a second Steinway that had been positioned so that the two pianists faced each other.(Aimard is featured in the film Note by Note: The Making of Steinway L1037. It’s available on DVD and is a must for any piano lover). CSO percussionists Cynthia Yeh and Vadim Karpinos rounded out the composition’s named participants.

This was a piece that the great Bela Bartok wrote with his second wife in mind as the second pianist. Himself a dazzling piano virtuoso of as much renown as a performer as he was as a composer, Bartok and his wife Ditta gave the U.S. premiere of this singularly scored concerto in their adoptive home town of New York City in January, 1943. The audience then must have been as delighted and as absorbed in the brilliance of this work as the patrons at Symphony Center now. This was an enthralling, dynamic performance that totally involved the listeners as well as the musicians.

Surprise entrances, thundering exclamations and flourishing exits marked this exciting piece. The inspired playing of Aimard and Stefanovich reminded the listener that the piano is as much a percussion instrument as it is a melodic one. The sonata was written for four virtuoso performers and the assemblage on the Armour Stage more than held up their end of the bargain!

Igor Stravinsky was already the talk of Paris in the Belle Epoque era of the early 1900s. The twenty-something composer caught the eye of the great impresario Diaghilev, who invited him to assist in orchestrating a piece for his ballet company’s 1909 season. The Firebird flew into Stravinsky’s lap after two prominent Russian composers turned Diaghilev down. They must have felt as the actor Burt Reynolds did after turning down the role of James Bond! Stravinsky’s Firebird was an instant success and remains a mainstay of the both the ballet and symphonic stages.

Maestro Boulez showed his complete and intimate knowledge of the piece and of the composer’s intentions. The orchestra literally sparkled in its restless passages and Boulez allowed them to stretch their collective wings in the deliciously detailed orchestrations of the final movement.

Boulez and the CSO performed The Firebird in its entire sweeping panorama, from the opening string glissando to the closing thunderous percussion. It instantly brought the audience to their feet, eliciting a prolonged and calamitous ovation. Maestro Boulez walked among the musicians, particularly raising the hands of the percussion and woodwind players, recognizing them for the true musical champions that they are. If this is Boulez at 85, it is apparent that he is not content to rest upon the laurels of past successes. He has much to offer the future.

Posted by Dwight the Connoisseur at 3:39 PM