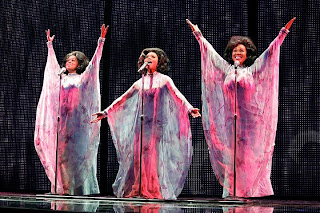 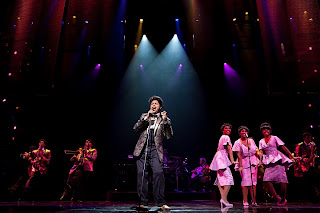 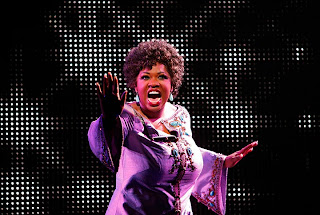 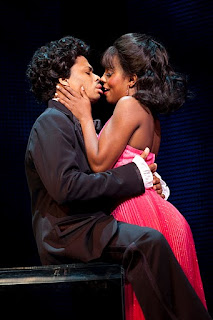 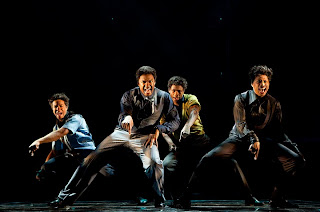 In 1967, I had the privilege of photographing Diana
Ross and The Supremes in concert at the Chicago Theatre, benefiting the Chicago Urban League. It was an electrifying experience. Although I had seen them perform numerous times on television, there was nothing like seeing them in person, especially from my vantage point in the press pool at the very front of the theatre, hovering near the orchestra pit. The world had not seen anything like them before or since, until the Broadway musical land later, Academy and Golden Globe Award winning film, loosely based on their story, appeared some years later.

That same electricity surged through my veins as I watched the Broadway in Chicago production of Dreamgirls now appearing in a limited engagement at the Cadillac Palace Theatre through Sunday, January 31 at 2pm. If I had the choice of watching the Pro Bowl on TV and seeing a live performance of Dreamgirls at the Palace, the latter would win, hands down.

Staging is minimal, but the superlative singing and acting and the brilliant Bob Mackey-inspired costumes created by William Ivey Long more than make that up for. Dreamgirls is a tidal wave of raw emotion with a level of vocal performance that could be heard clear over to the staid walls of the Lyric Opera house a few blocks away. The costumes are an avalanche of brightly colored sequins. The effect is multiplied by the creative use of rotating video panels that show the performance in multiple images, replicating their mesmerizing effect on the public mind in 19690s America.

Moya Angela is a veritable force of nature as the full-figured and full-voiced Effie, who is the dramatic center of the show. She and friends Dena (the sultry Syesha Mercado) and Lorrell (scintillating Adrienne Warren) have aspirations of making it big at the Apollo with Effie’s brother, C.C. (Trevon Davis) as their songwriter and arranger.

The story follows the rise and disintegration of the fictional female R&B group, the Dreamettes in 1960s Chicago. This was the time of Race Records, when black musicians and performing artists were relegated to the chittlin’ circuit and black dance halls and limited airplay on a handful of black-oriented stations that were largely white owned.

The story really begins to get underway after the Dreamettes are reconstituted as a solo act under their newfound manager Curtis (an officious and vainglorious Chaz Lamar Shepherd, who eerily recalls the memory of Ike Turner) after a turn as a backup singer for potential cross-over star Jimmy Early (a silver-voiced Chester Gregory, embodying the image of greats like Jackie Wilson and an early-day James Brown).

A big deal is made out of efforts to ‘cross-over’ black groups and performers to gain acceptance in white audiences and in securing them ‘gigs’ in whites only venues. One of the truly funny scenes occurs in Act One when Jimmy Early tries to ‘tone down’ his soul crooning to a more Perry Como style. Early just can’t help himself and it isn’t long before he’s down on his needs in one of the most pleading, blues shouting voices imaginable. Needless to say, the ‘whites only’ gigs were quickly canceled!

A later scene, showing the Dreamettes in their first TV national appearance, brings the issue of racial prejudice and the media front and center. The black and white TV panels rotating behind the singers convey the magnitude of their impact.

Drama starts to unfold after Curtis decides to spin the Dreamettes as a solo group with the more camera-ready Deena replacing the full-figured Effie as the lead. The resulting anguish suffered by Effie is revealed in her heart-wrenching solo “And I’m Tellin’ You.” Moya Angela projects her voice from the souls of her feet to the back row of the upper balcony. Clearly, she needs no artificial amplification.

Speaking of Lyric Opera, I attended a matinee performance of their production of The Elixir of Love just prior to seeing Dreamgirls. It was impressive to hear the level of artistry among the Dreamgirls cast members. Although their voices were quite different from the Lyric’s singers, they projected a power and sincerity that would make them standouts on any stage.

Posted by Dwight the Connoisseur at 1:33 PM