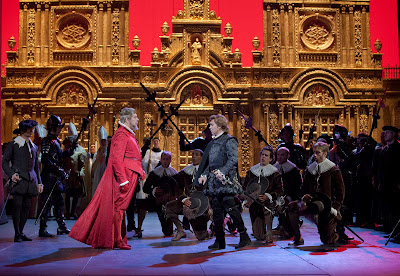 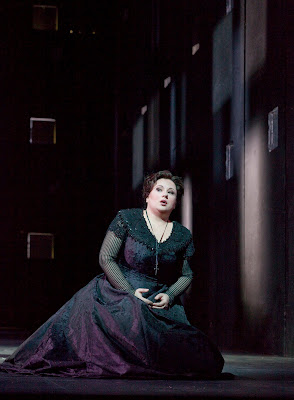 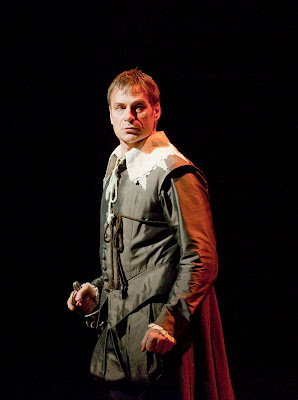 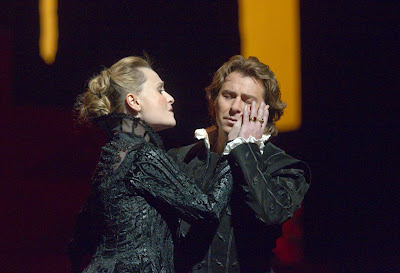 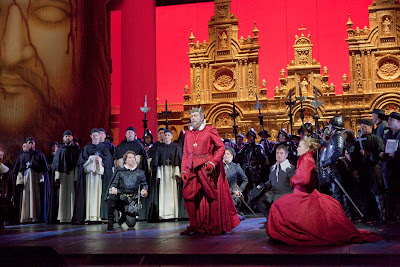 1. Ferruccio Furlanetto as King Philip and Roberto Alagna as Don Carlo in a father/son face-off
2.Russian mezzo-soprano Anna Smirnova as The Princess Eboli in her Met Debut
3. British baritone Simon Kennlyside as Rodrigo, Marquis of Posa
4. Marina Poplavskaya as Princess Elisabeth and Roberto Alagna as Don Carlo
5. King Philip (Furlanetto) and his wife, Princess Elisabeth (Poplavskaya) preside over the Spanish Court in Madrid circa 1560

New York—Metropolitan Opera’s new production of Verdi’s Don Carlo is a virtual blueprint for what constitutes Grand Opera. The production, directed by Nicholas Hytner, director of London's National Theatre, in his Met debut, continues through December 18th at the Metropolitan Opera House, Lincoln Center and will be seen in movie theatres around the world Live in HD on Saturday, December 11 at 11:30am Central Time, 12:30pm Eastern.

Director Hytner described it aptly when he said, “Don Carlo is the quintessential Verdi opera.” It is a well-constructed opera that moves at top speed with all cylinders at full-throttle throughout its four hour and forty-five minute running time. There’s not a dull moment. Watching the performance live at the Metropolitan Opera House on opening night, I found my attention riveted to the spectacular performance of the superb singers and the unfolding dramatic action.

Conductor Yannick Nezet-Seguin of Montreal, kept a tight reign on tempo and timbre, creating a sweeping orchestral panorama to support the epic action on stage.

Star French tenor Roberto Alagna, a Met favorite, led the all-star cast in the title role. His soaring voice and expressive demeanor added a sense of gravitas to the meaty role. He never lost his edge throughout the lengthy performance, displaying dramatic and vocal ‘chops’ that any fellow performer would envy.

The other cast members carried their roles with similar authority. Russian soprano Marina Poplavskaya was luminous as Princess Elisabeth of Valois, the daughter of Henry II of France. Don Carlo, the heir to the Spanish throne and son of King Philip II, falls in love with her while negotiating a peace treaty between the two countries. His ardor is immediately dampened when he learns that her hand has already been promised to his father as part of the deal. While all around celebrate the end of the war, the two star-crossed lovers are devastated.

Don Carlo seeks solace at the tomb of his grandfather, Emperor Charles V,

where the emperor’s ghost confronts him. This apparition would figure prominently later. His friend, Rodrigo, Marquis of Posa, sung forcefully by British baritone Simon Keenlyside, reminds Carlo of his commitment to the cause of freedom for the Flemish people who are oppressed by Spain, in the person of Carlo’s own father, the King. It was truly Keenlyside’s night. He gave a brilliant performance!

King Philip, sung by Italian bass Ferruccio Furlanetto, gave perhaps the most inspired performance of the evening, particularly in the soliloquy at the beginning of Act IV (“Ella giammai m’amo!”), wherein he reflects upon his life of futile conquest and his loveless marriage. He consults with the old, blind Grand Inquisitor, sung in all his vainglorious splendor by Chicago-area bass Eric Halfvarson. King Philip’s entreaties to spare his son are rebuffed. The Inquisitor has sentenced Don Carlo to death for heresy and treason, telling the King that God sacrificed his son for the good of mankind and that Philip should therefore stifle his love for his son for the sake of the faith and the stability of the Church and Throne.

The stunning sets and costumes designed by Bob Crowley marked his debut at the Met. In conjunction with the lighting designed by Mark Henderson of London, he conveyed both the grandeur and the great tragedy of the historic events that underlay the action. The Inquisition scene and the soliloquy in King Philip’s study were the highlights, both visually and dramatically.

This Premiere production of Don Carlo continues on the stage of the Metropolitan Opera House, Lincoln Center, through December 18, with a Met Live in HD transmission December 11. Tickets and information are available at www.metopera.org. or at www.fathomevents.com.

Posted by Dwight the Connoisseur at 3:10 PM