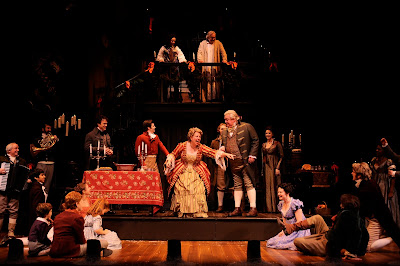 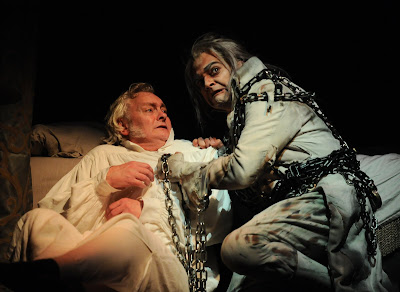 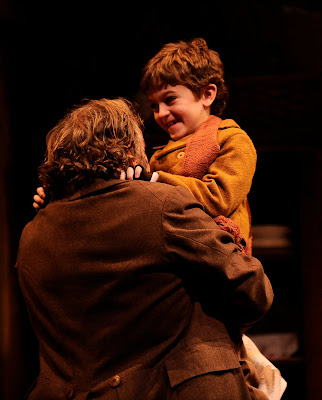 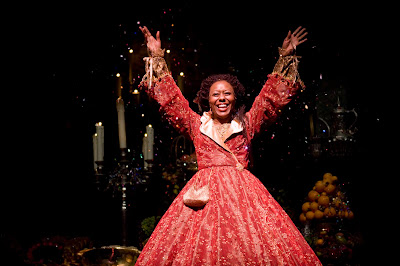 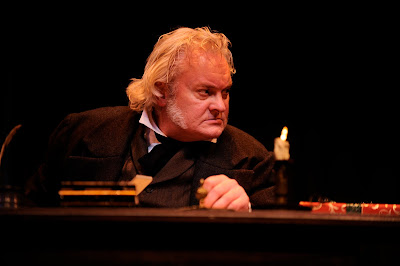 1. The Fezziwig's (John Lister & Susan Felder) preside over their annual Christmas party at their warehouse

2. Scrooge (John Judd) is visited by the Ghost of Jacob Marley (Anish Jethmalani)

4. Penelope Walker is fabulous as The Ghost of Christmas Present

Goodman Theatre of Chicago presents a streamlined version of “A Christmas Carol” in their 33rd year of presenting the repertory company’s annual Christmas gift to the city, which cuts to the very heart of Charles Dicken’s morality tale.

Sets are pared down and extraneous special effects are stripped away to expose the most essential elements. As a whole, the production lays bare the social and ethical truths that Dickens so cleverly hid beneath layers of plum pudding and Christmas Trifle in this Holiday evergreen.

Beloved Chicago actor John Judd (Magnolia at Goodman, The Dresser, The Butcher of Baraboo and Orson’s Shadow, Steppenwolf) makes his Goodman debut in the legendary role of Ebenezer Scrooge. He plays the garrulous character with an almost cinematic sweep that at once reveals Scrooge’s resolve to eschew the Christmas spirit, and the vulnerability and wounded-animal fear that lies underneath.

Chicago actor and director William Brown returns for the fifth consecutive year to stage this production. In many ways, this is his best effort to date and shows the benefit of his experience. Clunky sets of the past are dispensed and supplanted by a simple black backdrop highlighted with starry lights and artificial ‘fog’ rising from the stage floor. This allows the actors to move freely about, filling the stage with their magnetic presence. This serves to propel the story forward with lighting speed. From the opening strains of street musicians and carolers singing ‘Silent Night’ and Scrooge's declaration of "Bah! Humbug!" to Tiny Tim’s final “Good Bless Us, Everyone!” this is a Six Flags ride that goes from the heights of humor to the depths of human despair.

“A Christmas Carol” is a heartwarming and fulfilling experience that is must viewing for the entire family during the Holiday season. The production runs in Goodman’s Albert Theatre through December 31. For tickets and information, visit www.goodmantheatre.org.

Besides Judd’s spot-on portrayal of Scrooge, there are several other performances of note. “Carol” veteran John Lister infuses the delightful Christmas Eve dance-party scene at Fezziwig’s warehouse with an ebullience that is infectious. The onstage dancers and musicians make this lively scene the highlight of the evening.

Tiffany Scott returns in the role of Belle, which she also played in 2005. She gives a heart-wrenching performance. It is particularly so in the scene in which she breaks up with young Ebenezer, due to his single-minded focus on his career as a money-lender.

Penelope Walker lends a kinetic energy to the role of the Ghost of Christmas Present that lights up the stage. She is at her dramatic best in the scenes in which she uses Scrooge’s own words against him. In presenting the spirits of Want and Ignorance to an incredulous Scrooge, she retorts, “Are there no prisons? And the workhouses. Are they still in operation?” Regarding the prospect that the crippled Tiny Tim might die if Scrooge does nothing to help him, she says, again echoing his earlier, thoughtess words, “better that he die, and reduce the surplus population!”

Ron Rains, returning for his fourth year as Bob Cratchit lends a Chaplinesque physicality to the role that has the audience in stitches!

One of the most telling scenes occurs near the end, when Scrooge finds himself the brunt of a parlor joke at the Christmas Eve party held by his nephew Fred (Andy Truschinski, in his second season in A Christmas Carol). “And who is hurt by his selfish spirit?,” Fred asks his guests, rhetorically, “It is only Scrooge himself who is harmed.”

Anish Jethmalani returns for his sixth season as the Ghost of Jacob Marley, relishing in the role with scary grandeur. Eric Parks deserves a special ‘shout out’ for his Herculean effort as Ghost of Christmas Future. He is suspended above the stage in mid-air in his Darth Vader-like portrayal, completely shrouded in a claustrophobic costume, while silently conveying the eerie import of the scene’s message. (Yes, there’s actually a person inside there!)

Posted by Dwight the Connoisseur at 12:29 PM