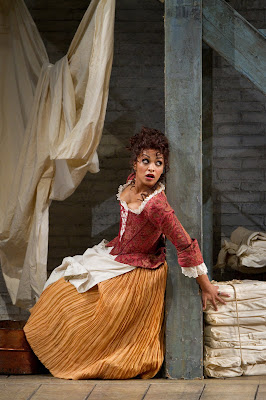 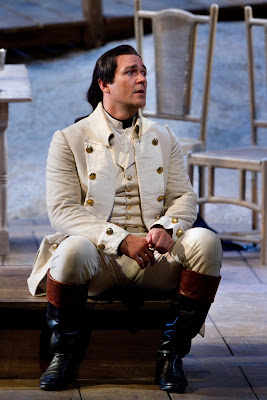 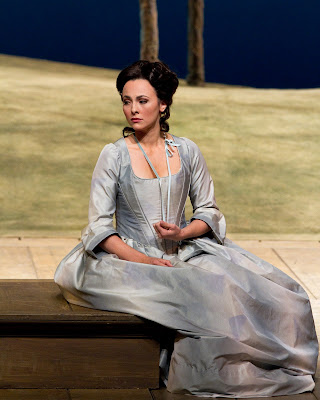 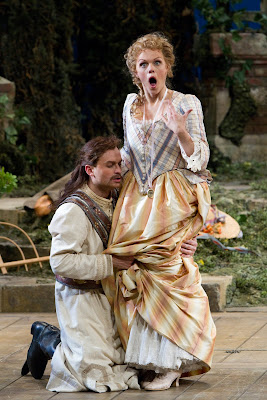 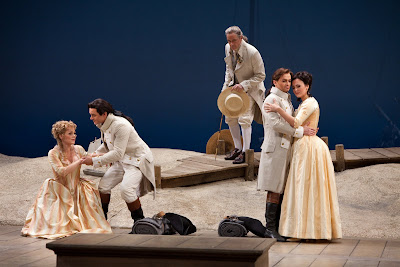 5. The ensemble cast with William Shimell as Don Alfonso (c)

New York—Superb singing, imaginative sets and costumes and artful conducting made the Metropolitan Opera’s revival of Mozart’s Cosi fan tutte ("All women are like that") a joy to behold.

The fireworks began in the pit, with renowned baroque specialist William Christie and his superlative conducting, in his Met Opera debut, finding just the right balance for Mozart’s elaborate score. He kept both the orchestra and singers in perfect synch throughout the performance, communicating with firm, yet sensitive gestures to both the musicians and singers. To the orchestra, he was their commander in chief. To the singers, he was both their guide and companion.

All four of the young singers who portrayed the sisters and their fiances were in their Met role debuts. At times, their perfectly matched voices soared over the orchestral line like so many seabirds gliding aloft with waves of sound acting as the wind beneath their wings. Bradley Brookshire’s confident Harpsichord Continuo playing also added an elegant accent.

British baritone William Shimell returned to the role of Don Alfonso, as the cynical bachelor who sets in motion the opera’s underlying scheme to prove that “all women are like that,” i.e. faithless and fickle. His deft portrayal kept the action grounded and acted as the sobering foil to the otherwise giddy proceedings..

The overall atmosphere of youthful folly and effervescence was maintained by Director Lesley Koenig. Sets and costumes by two-time Tony Award winner Michael Yeargan and lighting designed by Duane Shuler created the framework for this brilliantly conceived production to unfold. Cosi fan tutte continues at the Met through December 2. Millions around the world will have an opportunity to hear it live on the radio, with live broadcasts on Metropolitan Opera Radio on SIRIUS channel 78 and XM channel 79 on November 23 and December 2. For information, visit www.metpera.org.

Posted by Dwight the Connoisseur at 10:16 AM