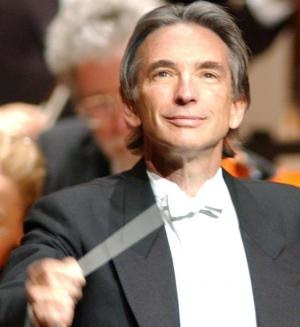 Chicago--Michael Tilson Thomas, music director of the San Francisco Symphony and guest conductor of the Chicago Symphony Orchestra Orchestra’s regular subscription programs of November 4-6, presenting a program entitled “Music of Aaron Copland,” is as close as possible to a musical and spiritual heir to the composer who is considered, in the words of the great American poet Virgil Thomson, the “president of American music.”

Thomas, the ten-time Grammy, Peabody and National Medal of Arts winner, presented a stirring concert of
Copland’s music, spanning nearly three decades. The works extended from Copland’s youthful attempts at experimentation, to his use of music as a vehicle for social commentary, to his later period of quiet reflection and minimalism. Thomas is renowned as the premier interpreter of Copland’s music and, since the death of Leonard Bernstein, is considered the preserver of his legacy.

“Most of us know Copland in his middle period, the so-called ‘Populist Era’ of the late ‘30s through ‘40s, when he expressed the unique character of the American spirit through works such as Appalachian Spring. But he was so much more than that,” Thomas said in impromptu remarks before the start of the program. “In his twenties, he was what we’d call today a ‘radical,’ testing the bounds of music, almost venturing into the avant garde. At times, his music was almost confrontational, as he embraced the new voices of his time. Then, in his later years, he reduced his composition to the elemental essentials, using only quarter notes and half notes. In the Orchestral Variations, which you’ll hear later in this program, he reduces his writing to permutations of the same seven notes played over and over again. (The work is widely considered one of the landmarks piano works of the twentieth century and CSO Principal Piano Mary Sauer illuminated its ground breaking passages with authority.)

“In his later years, Copland was trying to explore the melodic perception of people who had no musical knowledge whatsoever. He asked himself the question, ‘what song would a woman pushing a baby carriage sing to herself?” The music was stripped of any pretense or ornamentation. It was a new, liberal view of music that embraced 12 tonality in this late period.”

With that, he struck the downbeat for Copland’s Quiet City, with CSO members Christopher Martin, principal trumpet and Scott Hostetler on English horn. Martin delivered Copland’s piercing elongated lines with a complete mastery of breath control and melodic progression. The long passages burned with intensity yet, he imbued the quieter passages with a haunting subtlety. Hostetler’s passages dovetailed Martin’s with similar aplomb.

The following piece, Symphony for Organ and Orchestra, was an absolute masterpiece! Written when Copland was just 23 years old, the work prompted the great German-American conductor Walter Damrosch to declare to the audience, when he premiere the work in New York, “ Ladies and gentlemen, I am sure you will agree that if a gifted young man can write a symphony like this at twenty-three, within five years he will be ready to commit murder!” The drastic overstatement may seem a bit inappropriate by today’s standards but you get the point.

The highly unorthodox construction of the piece at times places the ‘solo’ organ in complete apposition to the orchestra, introducing minimalist themes that are expanded upon by, first the strings, then the brass, and finally the percussion sections in a succession of ebbing and flowing crescendos that were masterfully controlled by Thomas’s firm hand and exquisite sense of tempo.

The use of the harp and calliope to add sparkling tonal accents to the scintillating array of sounds created by organ soloist Paul Jacobs were further evidence of Copland’s genius.

In the final bars, Jacob’s organ playing invested the composer’s writing with a sense of gravity and deep expression that elicited heart-pounding emotion.

Copland’s beloved Appalachian Spring was the final piece on the program. It revealed yet another side to the composer's and Thomas’s aptitude. In his between performance remarks, Thomas noted that he had expanded the orchestration to Copland’s Orchestral Variations “under his direction,” referring to his association with Copland in Thomas’s formative years as a young composer.

“Appalachian Spring was written at the height of the Second World War,” Thomas said in his onstage, introductory remarks, regarding the now-landmark piece that was introduced to the world as music for a ballet premiered by the great Martha Graham at the Library of Congress in Washington, D.C. The piece earned Copland a Pulitzer Prize for Music. “There’s a disturbing portion of music that interrupts the Shaker melody that is like the composer telling a young couple, embarking on their lives together, that life will not always be a bed of roses. ; that there are trials and tribulations ahead. Then, what follows is the familiar theme that is peaceful, almost serene.”

In Thomas’s deft hands, the final strains of Appalachian Spring softened into a reverence that became almost a benediction.

Posted by Dwight the Connoisseur at 11:46 AM