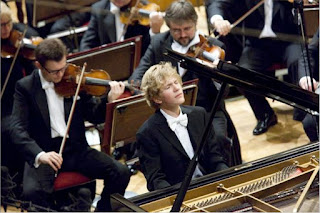 Jan Lisiecki in a flight of ecstasy at the keyboard 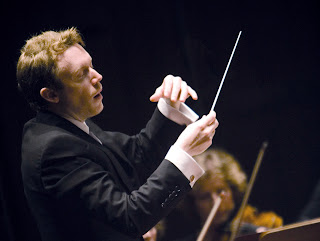 NEW YORK—The New York Philharmonic debut of 17-year-old pianist Jan Lisiecki in the challenging Piano Concerto in A minor by Robert Schumann was a symphonic event of monumental proportions. The young pianists precise attack in the opening bars set the tone for the inspired performance that would unfold over the next 30 minutes.

Guest Conductor Daniel Harding, the music director of the Swedish Radio Symphony Orchestra, is a British conductor of considerable renown, having been recently elected a member of The Royal Swedish Academy of Music. His simpatico with the soloist produced some ravishing moments of interplay, particularly among members of the woodwind section and the brass.

Schumann’s highly energized concerto was sandwiched by a pair of Jean Sibelius’s most programmatic symphonies, the No. 3 in C major and No 7, also in C major, which represented snapshots of both his earliest work and his later swan song. Sibelius is best known as a fierce nationalist, whose works celebrated the folk traditions of his native Finland. His most famous composition is his stirring patriotic composition Finlandia, composed in 1900. Yet the Symphony No. 3 belies his deep rooting in the symphonic traditions of the late Romantic period. It is here that conductor Harding and the Philharmonic truly shined. His illuminating and pensive approache to the intertwining thematic material gradually evolved into a highly emotive finale that wrapped the auditorium in a hushed reverence. By contrast, the tension created in the final movement of the Seventh Symphony erupted in a fantastic conclusion, which displayed the composer’s spirituality. Daniel Harding and the New York Philharmonic paid a stirring homage to Sibelius’s legacy as a true musical visionary.
Posted by Dwight the Connoisseur at 7:45 PM