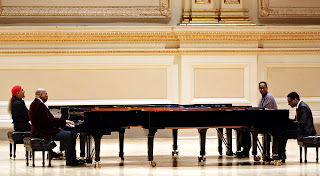 Danilo Perez emotes at the keyboard

NEW YORK---An harmonic conversion of four of the greatest Latin voices in piano jazz appeared in the Isaac Stern Auditorium at Carnegie Hall. Sounds of Cuba, Brazil and the furthest ancestral reaches of Africa  and South American tribalism intermingled with strains of Debussy and modern African American jazz as Gonzalo Rubalcaba, Chuchjo Valdes, Egberto Gismonti and Danilo perez launched into a largely improvised program that both showcased their considerable pianistic prowess and the transcendent power of Latin music.

Gonzalo Rubalcaba was the first to mount the Steinway, weaving etherial threads of old Cuban salon music, which somehow, in its own way,  channeled the spirit of Chopin, intermingled
with the avant garde flashes of  Cecil Taylor and Muhal Richard Abrahms and somehow settled on an eclectic reading of Sousa's "Stars and Stripes Forever" somehow echoing a languid, slow-grind dance on a rum-stained, dust floor parlor along Calle Neptuno in Old Havana.

Indeed, dance rhythms were as much a part of the music as shades of European classical and American jazz influences that included penetrating solo performances by each of the artists, followed by duets and then a rousing quartet appearance that was historic and epic in both occurrence and proportion.

Part of Carnegie Hall's Voice From Latin America series, it was a night that brought together the lions of Latin American piano artistry by a tapestry of the greater new York metropolitan area's diverse Latino community and others who appreciate its all-encompassing music. The series is curated by the esteemed conductor Gustao Dudamel, among other celebrated Latin musical icons.

The final piano quartet served as both a showcase for the individual talents of each of the artists, but a collective overview of their contrasting approaches to a music that defies category.
By concert's conclusion, at least two of the the pianists abandoned any pretense of playing synchronized music and began using their pianos as percussion instruments that celebrated the dance. The overflow, standing room crowd gladly followed along, nearly dancing the samba out of the exits into the chilly night air.

Posted by Dwight the Connoisseur at 2:31 PM