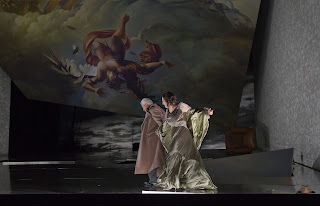 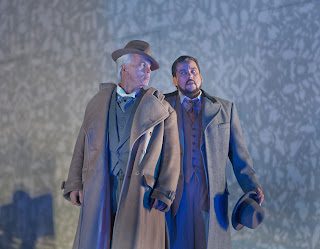 NEW YORK---A stellar cast and superb singing and an imaginative twist in superb storytelling and stagecraft transformed the Metropolitan Opera's production of Verdi's Un Ballo in Maschera (The Masked Ball) into a timeless drama of political intrigue, love-triangle jealousy and existential angst.

David Aiden's production set the action of the story surrounding the assassination of King Gustav III of Sweden in 1792 into the tumultuous years of early twentieth century Europe. The costumes, in particular, in David Aiden's masterful production, allude to the Russia's post-Revolutionary years, sometime around the 1920s. The set, consisting primarily of a polished stainless-steel vault that practically surrounds the singers on all sides, except, of course, facing the audience, is dominated by a giant bas relief portrait of Icharus, falling away from the sun.
"The symbolism of Icarus is quite significant to the action of the drama," director Aiden tells Met General Manager Peter Gelb in a backstage interview. "As is also the portrait of the King that hangs in Anckerstrom's study, who is the King's consular and personal friend-turned-assassin, sung forcefully by Dmitri Hvorostovsky. The set for the study becomes the claustrophobic room that is less of a real space than a dream that's being enacted inside King Gustav's mind. We see how the librettist takes the story the story of King Gustave III (Gustavo in Verdi's opera), and taken into the abstract to make him a sort of everyman, who is conflicted by his sense of duty and his personal desire to rid himself entirely of it. He is desperate to the point of putting himself in constant danger, almost willing to risk death, in order to rid himself of his obligations.
We also see Anckerstrom disintegrate right before our eyes. He goes completely mad, evening to the point of almost killing his wife, before making the ultimate decision to seek revenge by killing the king."

Met Live HD director Matthew Diamond did a superb job of realizing Verdi's sweeping epic on the big screen.
The singing is brilliant throughout, particularly that of soprano Sondra Radvanovsky as Amelia, the wife of the king's counselor and friend and the focus of the love triangle and mezzo-soprano Stephanie Blythe as  the flask-swigging gypsy-seer Ulrica. Majestic tenor Marcelo Alvarez is the star-crossed King. Coloratura soprano Kathleen Kim nearly steals the show in the trouser role of Oscar.
Radvanovsky's ravishing voice and exquisite acting ability filled the screen with a magnetic presence. The parlor scene between she and Hvrostovsky/Ackerstrom was among the most riveting dramatic scenes of this opera season.
An encore performance plays in theatres Wednesday, January 9 at 6:30pm local time. Check local listings for locations or visit www.metopera.org or www.fathomevents.com.