MET LIVE IN HD AIDA A CINEMATIC AND DRAMATIC TRIUMPH

NEW YORK—While audiences flocked to see the premiere of Peter Jackson’s prequel to The Ring trilogy, The Hobbit: An Unexpected Journey, audiences around the globe crowded into theatres to see the Metropolitan Opera’s Live in HD transmission of Verdi’s masterpiece, Aida. The opera incorporated a stellar cast of top-notch singers, a battalion of chorus members, dancers, onstage musicians and live horses to produce a spectacle that rivaled the impact of Jackson’s 3-D epic.

Directed for the Metropolitan Opera stage by Emmy Award-winning stage director Sonja Frisell (La Scala, Lyric Opera of Chicago, Covent Garden) for Live in HD Cinema by Emmy Award-winning television director Gary Halvorson (Friends, Two and a Half Men, The Drew Carey Show), the sweeping drama of Verdi’s depiction of ancient Egypt was elevated to cinematic proportions. Halvorson and his crack camera team swept the audience into the vortex of Verdi’s all-consuming drama with imaginative overhead, close-up and side camera angles that brought the viewer into intimate contact with the singers and the action, creating a powerful dramatic and visual experience. The setting inside the Temple of Isis, in particular, seemed more likes scenes from a movie than action onstage with detailed depictions of rituals at the altar. Particularly telling was the scene showing the adornment of Radames as the new commander of Egypt’s army by the High Priest, Ramfis (Stefan Kocan).

The Triumphal March, perhaps the most famous instrumental piece in all opera, was vividly depicted by squadrons of uniformed soldiers and phalanxes of slaves, superbly costumed by Dada Saligeri and a cadre of dancers choreographed by Alexei Ratmansky.  Onstage trumpets were led by Emmy Award-winning Principal Trumpet Billy Hunter, also Principal Trumpet for the Grant Park Symphony Orchestra in Chicago, who appeared onstage in full costume, taking direction from Conductor at Met Opera Music Director Fabio Luisi and the superb orchestra in the pit.
Beyond the towering sets, which employed every lift and truck at the Met’s disposal, including hundreds of stagehands, the bottom line is Bel Canto, or beautiful singing. The front-line cast was exceptional. Liudmyla Monastyrska was mesmerizing as the Aida, the enslaved Ethiopian princess. Her luminous, supple voice wove an hypnotic spell as she forcefully expressed her anguish. Conflicted by her devotion to her embattled country and her devotion to her father, the Ethiopian King Amonasro, sung majestically by George Gagnidze, and her guilt-ridden, head-over-heels love for her nation’s conqueror, General Radames, hers was a Met debut that will mark her as one of the reigning Aida’s in the Met’s storied history of the role. Such greats as Leontyne Price, Kirsten Flagstad and Gloria Davy, the first African American to sing the role at the Met, who died at the age of 81, just days after the Met’s 2012 season premiere, similarly graced the stage in this powerful production, the name of Liudmyla Monastyrska has rightfully earned its place alongside them.
The Ukrainian soprano, in a backstage interview with Live HD Host and Met star Renee Fleming, spoke in translation of the challenges of her role and her delivery, which Fleming described as “extremely polished.” She revealed that she relaxes during intermissions by playing traditional folk songs from her native land on the piano. She then delivered a heartfelt greeting to her fans who might be watching the live movie cast in theatres around the world, although her native Kiev has yet to receive them in movie theatres.

The role of Radames was sung with stentorian clarity by tenor Roberto Alagna. Just in from a critically acclaimed performance of Donizetti’s L’elisir d’amore at Covent Garden, Alagna spoke of the challenges of singing the famous aria “Celeste Aida” in the first act. "You just have to relax and let the music come," he said of the demanding aira. "All the while, I was thinking of the very first tenors who sang this role and tried to honor them."

Veteran Mezzo-soprano Olga Borodina, who has sung the role of Amneris countless times at the Met, gave a master class in dramatic operatic singing. Her denouncement of Radames/Alagna in Act IV after he refuses her offer of amnesty was particularly spine chilling. In close up, one could visibly see a tear fall from her eye at the end of her emotional aria. 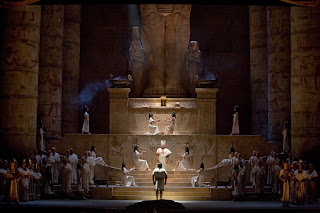 Inside the Temple of Isis 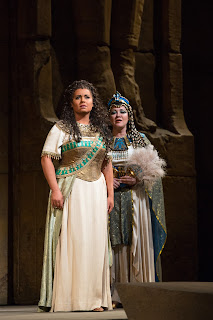 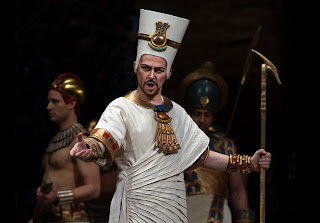 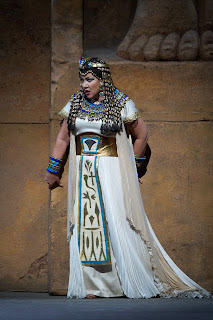 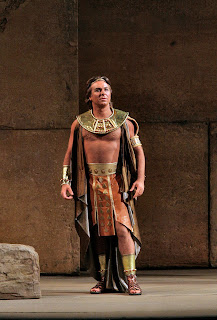 Roberto Alagna in the starring role of Radames

Aida is one of the Met’s biggest and splashiest productions and this season’s Live in HD presentation is breathtaking to behold. It will be seen in an Encore performance Wednesday, January 16, 2013 at 6:30pm. I plan to be there. Check local listings for theatre locations or visit www.metopera.org or fathomevents.com.
Posted by Dwight the Connoisseur at 4:49 PM