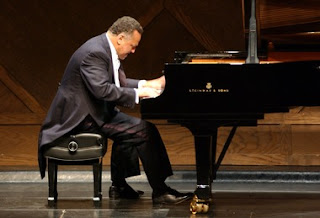 Andre Watts emotes during the Rachmaninoff Piano Concerto No. 2 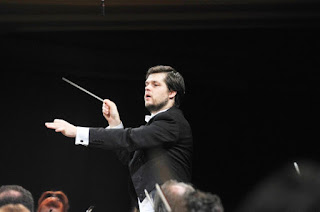 Juraj Valcuha at the podium

NEW YORK---It has been 50 years since piano giant Andre Watts made his New York Philharmonic debut at the tender age of 16. His appearance this past week as guest soloist with young Slovakian conductor Juraj Valcuha, in his New York Philharmonic debut, could not have been more revelatory. Their pairing in the Piano Concerto No. 2 by Sergei Rachmaninoff as the centerpiece of a program dominated by operatic themes by Carl Maria Von Weber (Overture to Oberon)  and Richard Strauss (Symphony Fantasy on Die Frau ohne Schatten and Suite from Der Rosenkavalier) showcased both the work of a seasoned professional and that of a meteoric talent on the rise.

Valcuha is currently the chief conductor of the Orchestra Sinfonica Nazionale della RAI in Torino, Italy and has debuted to critical acclaim with such prestigious orchestral bodies as the Berlin Philharmonic, San Francisco Symphony and Filarmonica della Scala in Milan. Watt's current tour schedule includes the majority of the great orchestras and concert halls of the globe.

Weber's sprightly Overture to Oberon opened the program on a good humored note, allowing both the conductor and the orchestra to flex their tonal muscles in advance of the heavy musical lifting that would follow. Valcuha even got in a bit of podium aerobics, nimbly bouncing on tip-toe to the music and bending deeply into the front row of violins as he coaxed them to greater sonic emphasis.

Andre Watts has lost none of the intensity that quickly brought him to the apex of a brilliant career that has survived the test of time. His phrasing from the opening passages was fraught with emotion. His face awash with expression, he caressed the keys in the romantic melody of the famous Adagio sostenuto. Although popularized ad nauseum in the films and pop music of the last century, Watts made it sound anew. A hushed exchange between the woodwinds and Watt's restrained, yet emotive playing was made even more exquisite by Valcuha's sympatico at the podium. At the conclusion of his spine-tingling performance, Watts paused, allowing the resounding chords and depth of emotion to sink in.  Appearing to wipe a tear from his eye, he proceeded to dazzle the audience with his  display of pianistic prowess. He forged into Rachmaninoff's intricate musical maze, dispatching it with ease. Extended runs of 16th notes were precise and articulated. His lengthy, sustained tremello  was a marvel to behold. As orchestra and soloist thundered to crescendo, the audience was brought to its feet in a rapture of sustained applause, acknowledging a landmark performance.

Strauss's frothy, but inspired compositions from his well-known operas were handled with authority and imaginative spurts of brilliance. Valcuha has studied Strauss well and knows how to mine each measure for its finely faceted diamonds of musical sparkle.  The Suite from Der Rosenkavalier, in particular, captured the imagined and fantastic majesty of its stylized grandeur. Its premiere in 1911 was recognized as one of the great events of operatic history. Valcuha and the New York Philharmonic recaptured that festive spirit at this performance in Avery Fisher Hall.

Posted by Dwight the Connoisseur at 4:27 PM