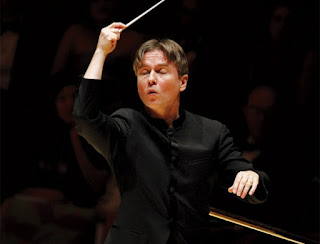 Esa-Pekka Salonen at the Philharmonia's podium is their Principal Conductor 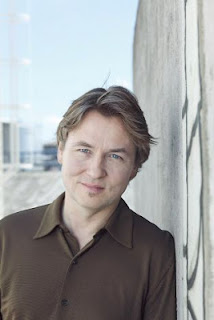 CHICAGO—It has been decades since the famed Philharmonia Orchestra of London has graced the stage of the Armour Stage at Chicago’s Symphony Center although its current principal conductor, Esa-Pekka Salonen has been a frequent favorite guest conductor since his splashy debut there nearly 25 years ago.

The Philharmonia stopped in the Windy City during an eight-city North American tour that included a program of tried and true audience favorites, Beethoven’s pensive Second Symphony and Berlioz’s showy Symphony fantastique. The orchestra’s tour began in downstate Champaign-Urbana near the University of Illinois and ended in New York City in the Lincoln Center presents Great Performers series, November 18 & 19 at Avery Fisher Hall.

The legendary Finnish conductor displayed his prowess and mastery of tempo from the very outset. His ability to turn a phrase from thundering crescendo to pianissimo on a dime was a marvel to behold. Strings were especially prominent in the Larghetto with their deep, burnished tone and free-flowing rubato. At times, Salonen elicited a sweetened tone that balanced the sometimes-blaring tones of the brass. The timpanist was noteworthy with his exceptional tone and forthright playing. Salonen’s overall approach to the work brought it into focus, improving the pace and performance as it went along in spite of a few awkward moments at the outset.

Berlioz’s Symphony fantastique was obviously the orchestra’s strong point. Salonen realized the French composer’s volatile vision with a firm hand, placing sharply defined emphasis on the most adventurous measures, yet allowing the individual components of the orchestra to express their individuality. There were some exquisite moments, beginning with the achingly lyrical playing of the strings in the opening measures, through the dancelike airiness of the waltz movement, Un Bal that saw the conductor almost dance ‘en pointe’ on the podium.  The tension he built during the “March to the Scaffold” erupted in a fiery conclusion that brought the audience to its feet.  The Prelude to Act III of Wagner’s Lohengrin provided an explosive display of virtuosity by the Philharmonia’s exceptional brass section.
Posted by Dwight the Connoisseur at 9:32 AM