Reviewed by Dwight Casimere March 11, 2013
NEW YORK---Lincoln Center Presents and its Symphonic Masters series brought one of the most recognized and venerated orchestras in the world, the London Philharmonic, and its cosmic principal conductor, Vladimir Jurowski. Through incisive intepretation and probative mining beneath the dense layers of orchestration in the compositions of Beethoven and Mahler, Jurowski and the London Philharmonic were able to give fresh voices to two compositions that have become mainstays of the symphonic stage.

Helene Grimaud's highly emotional and articulate playing of Beethoven's Piano Concerto No. 4 transcended the dazzling pyrotechnics of of the plethora of notes on the page, to lift into the realm of imagination, capturing the tangled web of emotions that engulfed Beethoven during one of the most difficult times in his life, the discovery that terminal deafness would engulf his creative genius. In many ways, the pathos evident in the Andante con moto, is a reflection of that inner torment, and Grimaud captured its poignancy. 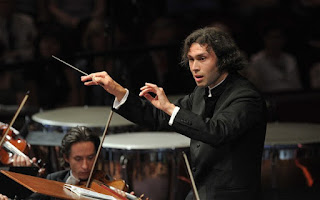 The London Philharmonic is well known. Besides its regular television and radio broadcasts, the orchestra has recorded soundtracks for numerous blockbuster films, including The Lord of the Rings trilogy.

Jurowski's mastery of Mahler's expansive melodies and complex orchestrations in the monumental Symphony No. 5, made it a joy to listen to. The nimble playing of woodwinds, the congusto rompings of the bass section and the penetrating declamations of the brass combined with thundering climaxes from the percussion section, made this a thrilling explication. The nearly hour and fifteen minute length of the composition seemed to fly by as the listener was drawn into the conductor's absorbing interpretation and command of tonal color. This was a Mahler that appealed to both the intellect and the heart.
Posted by Dwight the Connoisseur at 7:41 AM