NEW YORK--With its imposing and dramatic sets, spectacular singing and striking orchestration and harmonics, one wonders why it has taken nearly three decades for the Metropolitan Opera to mount a revival of Riccardo Zandonai's landmark Francesca da Rimini. Premiered at the Met in 1916 and last mounted in 1986, the current production features international superstar Eva-Maria Westbroek in a searing performance in the title role and veteran Met tenor Marcello Giordani and his sylvan voice in his 27th role in his extensive Met repertory. Met Live HD audiences experienced this towering production in movie theatres around the world. This reporter had the distinct pleasure of viewing the production live from the stage of the Metropolitan Opera in advance of the transmission. It was singular delight. An Encore Presentation is scheduled for  Wednesday, April 3 at 6:30pm. Check your local listings for theatre locations.

The Production by Piero Faggioni, captures the emotional entanglement of the opera's inherent dramatic tension. With towering sets designed by Franca Squarciapino and lighting designed by Gil Wechsler, and Stage Direction by Cavid Kneuss, the opera vividly portrays the triangular romantic dilemma between the central characters.

Eva-Marie Westbroek is the beautiful noblewomen Francesca who is unhappily married to Gianciotto, sung by Met favorite Mark Delavan in a powerfully lurid performancr. Francesca is smitten by Paolo, sung with soaring romanticism by Marcello Giordani. It is love at first sight, but love that is doomed from the outset.

Marco Armiliato, conducting his first Met performances of the opera, does a masterful job of navigating Zandonai's intricate orchestrations, which meld the colorful harmonic influences of Claude Debussy with the dynamic orchestral flourishes of Richard Strauss and the soaring melodies of Italian verismo.

There are notable performances throughout, particularly Robert Brubaker as Malatestino. He has sung 12 roles at the Met, and this ranks as his most challenging and triumphant.

The Choreography by Donald Mahler is an integral part of the overall success of this superlative production. 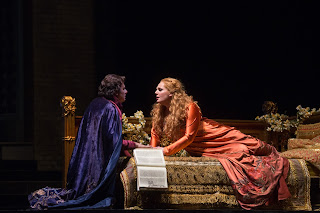 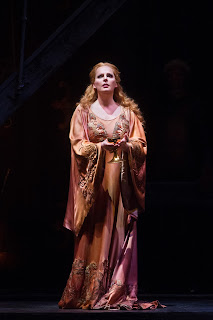 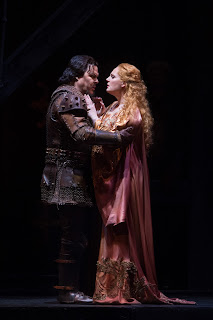 Mark Delavan as the conniving Gianciotto 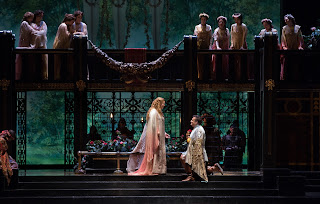 The Met: Live in HD is now seen in more than 1,900 theatres in 64 countries around the world. For tickets and program information, visit the Met's website at metopera.org or fathomevents.com.
Posted by Dwight the Connoisseur at 6:45 AM