NEW YORK--Kernnedy Center Honoree (1992) and Emmy Award-winning (also 1992) choreographer Paul Taylor looked dapper and genial as he took a curtain call with his dozen dancing dynamos after a  searing performance that marked the final weekend of the company's nearly three week "season" at Lincoln Center.

To call Taylor a modern dance icon is an understatement of the highest order. He is the last living link to the creators of this uniquely American art form, having cut his teeth at the heels of Martha Graham, with whom he began his late blooming career in 1955, Merce Cunnigham, and George Balanchine, who created the solo "Episodes' or him with New York City Ballet. Besides his many dance accollades, Taylor was the subject of an Oscar-nominated documentary, Dancemaker (1999), which aired on the PBS American Masters Series. Dancemaker is available on DVD.

In a program that provided a sort of Cliff's Notes sketch of the genius's last thirty years of choreography that both distills the creative genius of his antecedents and presents a heady concoction of his current oeuvre.

Le Sacre Du Pintemps (The Rehearsal-1980) is a case study in iconic imagery. With the famous music of Igor Stravinsky hauntingly reduced to an arrangement for two pianos, it features the complete corps dressed in almost prison-stripe garb( set and costumes by John Rawlings),  and a solo male dancer perched atop an obelisk. The movements of the dancers are almost an etch-a-sketch flip card of stilted movements that recall the early choreography of Graham and Ballanchine, with stop motion pauses that resemble hyroglific poses. The symbols on the obelisk resemble hyroglifics as well.

The Uncommitted (2011), with music by his contemporary, the Estonian avant-garde composer Arvo Part, which is a pastiche of music that entwined the subsections including his   tintinnabuli-styled composition, Fratres, with its persistent chord sequences and repetitive percussion motif, with Mozart's Adagio and the polyphonic and contrapuntal early Baroque piece  Ricercar, and Summa, which represents the theological masterpiece of Thomas Aquinas (c.1225-1274), a compendium of the teachings of the Catholic Church, recognized as the single most influential work of Western philosophy and theology. All of this, set in motion by Taylor's fluid choreography, accompanied by set and costumes by Santo Loquasto and Loighting by Jennifer Tipton, was an absorbing piece that best exemplified Taylor's unique gift at posing heady philosophical questions while devising a thoroughly entertaining and engaging piece of dance-craft.

The finale, Promethean Fire (2002), in which the program referenced a quote from William Shakespeare, was the most satisfying work of the evening, and vintage Paul Taylor all the way, with its stylish, undulating dance movements set against the music of Johann Sebastian Bach as orchestrated by Leopold Stokowski. The stark contrast o the Baroque music, particularly the familiar Tocata & Fugue in D minor, the Prelude in E-flat minor and the almost Ecclesiastical lilting phrases of Bach's Chorale Prelude, was nearly rapturous. 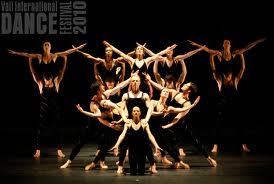 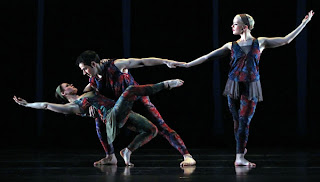 Posted by Dwight the Connoisseur at 1:10 PM