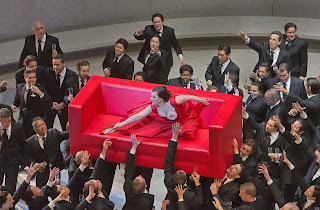 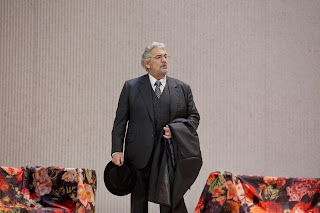 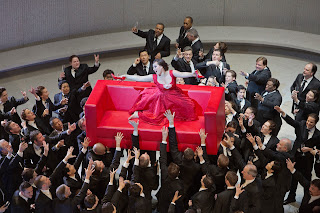 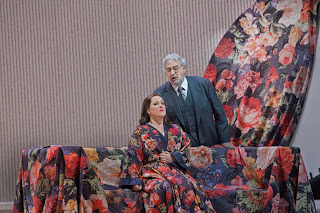 NEW YORK--A wealthy woman of free and easy virtue attracts the attention of an impetuous young suitor, who is, coincidentally, the son of a prominent nobleman.  This, in a nutshell, is the centrifuge of character interplay that drives Guiseppe Verdi's La Traviata, in this revival of Willy Decker's 2010 Metropolitan Opera production. Originally adapted from the novel and play La Dame aux Carnelias, written by Alexandre Dumas fil, the son of the famed author of The Three Musketters. Originally set in the lavish salons of mid-19th Century Paris, the setting is fast-fowarded to a vaguely modern Beaux Arts setting in this starkly colorful production.

Featuring Diana Damrau in her role debut as Violetta and the esteemed Placido Domingo also in his  role debut anywhere as Alfredo's father, Giorgio Germont, the performance sparkles from beginning to end with exceptional singing, terrific dramatic interplay and superlative music, conducted by Yannick Nezet-Seguin in his first Met performances of the Verdi tragedy.

Savatore Cordella pinch-hit as Alfredo Germont, Violetta's ardent suitor, replacing an ailing Saimir Pirgu. Cordella displayed a lovely, liquid voice and a smooth, dramatic flair, However, he seemed to be rather muted in the early going, but seemed to warm up later in the performance to unleash the full power of his rich, velvety voice.

Damrau as Violetta, on the other hand, was a raging inferno throughout, lighting the stage afire with her agile moves, particularly while balancing precariously on the edge of the back of a sofa, while quaffing a bottle of imaginary champagne and toasting the joys of illicit love. All the while an ominous giant clock and the spectre of a white haired, dark-suited stranger dominates the edge of the stark, pale grey set, foreshadowing Violetta's doom.

Verdi's opera is a cautionary tale of the high price society, and morality, exacts on those who, like Icarus, attempt to fly too close to the flame of torrid free love and the life of excess and frivolity. Reckless abandon has its own intrinsic price. A higher moral force is always waiting in the wings to exact its toll. However, the ride can be glorious and filled with some incredibly great music and fantastic singing! Go see La Traviata, even if you've already seen it a hundred times. Domingo and Damrau create fireworks on the Met stage. Their chemistry and the sparks it creates are irresistable. For tickets and information, visit metopera.org.
Posted by Dwight the Connoisseur at 10:34 AM