NEW YORK--Visionary architect, designer and artist Gaetano Pesce was effusive as he described his masterpieces to a small group of reporters in a preview to his first solo New York exhibition in 25 years, held at Fred Torres Collaborations. The show ran March 21-25 and was one of the landmark events of the early spring art season. It had all of the earmarks of a theatrical opening night, with  the sound of hammer and nails as workmen were still putting the finishing touches on installations and sign painters removed the facing from the carefully stenciled marquee sign for the show.

Informally, Pesce spoke to the issues of love, empathy and political commitment'  which dominate the themes of his art. Pesce is known for breaking beyond the traditional boundaries of art, architecture and design to embrace all of these disciplines through a poetic imagination that fuses color, reality, new materials and figurative expression into singular works of ingenuity.

"This piece talks a lot about the corruption of politicians and bad government," Pesce said of his dramatic sculpture Italia in Croce(Italy Crucified 2010), which was the centerpiece of the third room of the gallery, which was dedicated to the theme of Agape, or unconditional, divine and enlightened love. "It's true that Italy is going through this kind of difficult moment," he said, motioning to the sculpture, which depicts a crucifix draped in a bloody, ragged shroud composed of urethane resin, wood and stones, "but it's also true that the politician, in the world;  if you look to Japan, or if you look to Russia, Brazil and also here (in the U.S.), we cannot say, like in the old time, that the politicians serve the country,  but most of the time, the country is supposed to serve the politician, and this is not acceptable. Because of  that, I believe, the country can suffer. There you have people without the work and without the pay and all the other things they need. So, in talking about my country, you see an extraordinary country that has a fantastic culture, with fantastic food, and fantastic languages, and see that it is in a condition of poverty, I did this to show the crucifixion of the country and the reason of that, is that everybody doesn't do what it will take to have it become what it was. Because, in the Renaissance it was an extraordinary country, teaching to others how government was supposed to be; etc.,etc. So this is the meaning of the piece."

Turning to the next striking piece in the room,  Heart Lamp (a pencil and oil painting on paper 1979), Pesce enthused, "this is a project related to design that is supposed to talk about the place where it is done. So, we start with a lamp in the symbol of lovers (the heart), and this arrow going through it finishes in a platform," he said, motioning to the downward flow of the image, "and this platform was done in marble and below it, is  the shape of a  plane. This is the position where the arrow arrives. If you look here, (at the plane at the bottom of the painting), you recognize the map of Venice.  So, this is a lamp that gives the possibility for people to buy the land and choose the place where the plane can land. If you are from Amsterdam, you land the plane in Amsterdam, if you are from Dusseldorf, the same. This is a project relating design to a place. That was the meaning of the of this lamp. "

Pesce's explanation of the two pieces further illustrates his continued use of irony and humor to attack the standardization of mass-produced objects and architecture, a quality that sets him apart from others in his realm. His projects have a point of view and make a strong statement that is both artistic and socio-political.

Gallery owner Fred Torres was quoted as saying "This exhibition showcases the narrative and heart of Pesce's work, His interests go beyond beautiful and functional objects. He's an artist who continually pushes the envelope by exploring themes of love, sadness, enlightenment and the pursuit of truth in everything he does."

In keeping with that, the theme of the main room of the gallery was dedicated to Philos, or fraternal love.  Pesce's rarely seen Habitat for Two drawings and Commune for Twelve drawings were featured there.

The most dramatic piece of the entire show was his latest, the World Trade Center Cabinet (2013), a functional resin piece with copper hinges fused to a lacquered wood base. It is a representation of Pesce's entry into the World Trade Center Memorial competition. The design consists of two tower structures connected by a heart. It is both a reminder of the majesty of the former twin towers and a remembrance of the tragedy that occurred there.

Coincidentally, Gaetano Pesce's one man show took place at the same time as the official observance of 2013 as the year of Italian culture in the United States.  Although unaware of the observance prior to the exhibit, Pesce commented, "That's good. This will be an important part of that 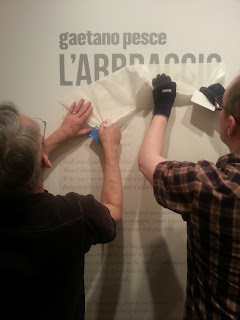 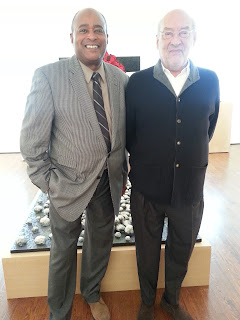 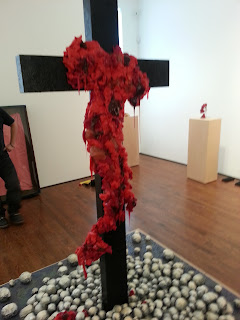 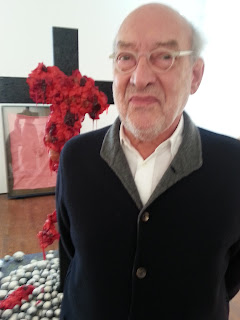 Gaetano Pesce with his Italia in Croce 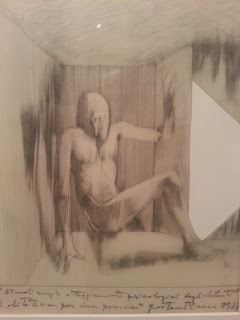 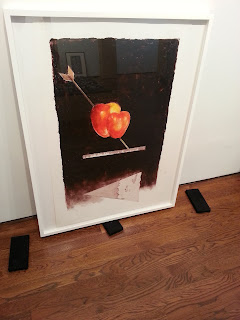 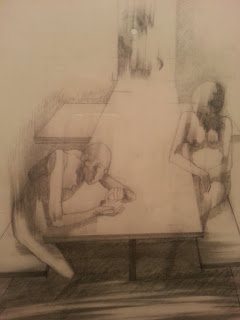 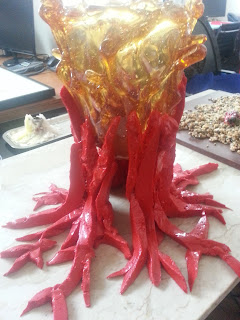 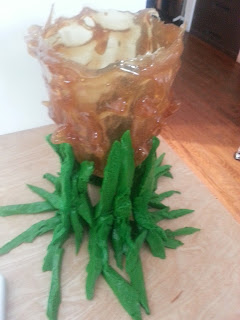 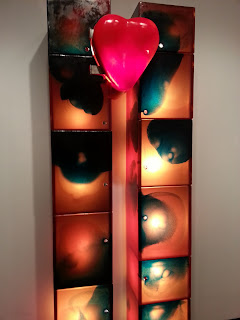 World Trade Center Cabinet 2013
Posted by Dwight the Connoisseur at 11:55 AM