FINDERS KEEPERS A DOCUMENTARY THAT PROVES TRUTH IS STRANGER THAN FICTION

Perhaps the most bizarre and, paradoxically, redemptive documentary to be seen this year is directors Bryan Carberry and J. Clay Tweel's "Finders Keepers." The film is proof that truth is indeed stranger than fiction.

"It's a funny story," asserts Peg Wood, the mother of the principal protagonistk, John Wood, "but it was born of tragedy." Not even the Cohen brothers could have invented this one. "Finders Keepers" is the story of John Wood and Shannon Whisnant, two men thrown together by the fickle finger of fate and pitted against each other of possession of a mummified amputated leg. That's right, a mummified amputated leg. Set in the microscopic town of Maiden, North Carolina, the circuitous odyssey of this taxidermal McGuffin goes all the way from Maiden, to the TV talk show studios of Europe and back to the U.S. syndicated TV courtroom of Judge Mathis, where it is finally resolved. For a time, the story captures the imagination of the entire world and dominated social media, then in its infancy.

"Finders Keepers is a Sundance 2015 selection and winner of "Best Comedy" at the 2015 Traverse City Film Festival. So, in spite of its ridiculous premise, it is not with pedigree or merit.

The original owners of said leg is John Wood, lost it in a plane crash a few years ago, in which, tragically, his father died. His father was a pillar of the community and an idol to John, who always felt dwarfed in his shadow. John could never live up to his father's expectations growing up and now that his father is gone, John felt it only appropriate that he keep his severed leg as a fractured tribute to his father's memory. 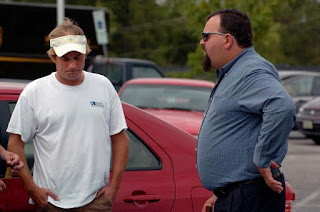 An unfortunate turn of events ensued post-accident. John was thrown out of the house by his mother because of his drug addiction. He was subsequently evicted from his apartment and all of his belongings, including the precious leg which John stowed inside a rusted out barbeque grill in a storage unit, which eventually went to auction for non-payment of rent.

Enter  Shannon Whisnant, a John Goodman-type low-level entreprenuer who makes his living by seemingly usely bric-a-brac and selling it to unsuspecting oafs with a good deal of showmanship and a steady line of B.S. Whisnant harbors desires of becoming some type of celebrity and suddenly he sees this dried up remnant of human existence as his ticket to fame.  "He thought he was gonna be the next Billy Bob Thornton," one interviewee says of him. Like I said, no one could make this up. 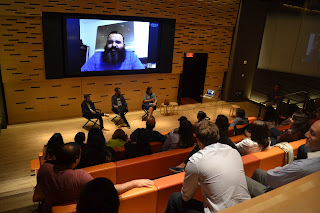 John Wood's nemisis in the fight for possession of his amputated leg, Shannon Whisnant, makes an appearance via Sype at a preview screening for journalists at the time of the New York Film Festival 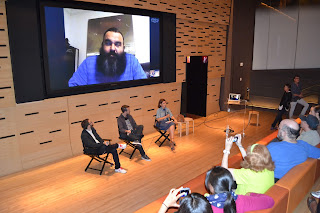 The story behind "Finders Keepers" unfolds like a long-running joke, with folks like his sister, in-laws, and mother chiming in at intervals. Buot the center of the story clearly focuses on the rivalry between the two men, Whisnant and Wood, and they're bizarre obsession with gaining possession of the foot. 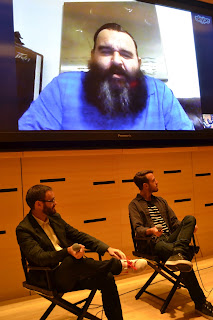 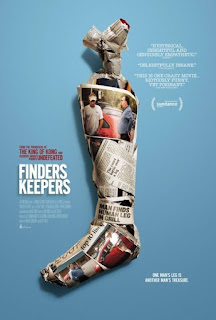 News clips interspersed throughout the film portray it as a kind of freak show, but clearly, from the standpoint of Wood and Whisnant, this is no laughing matter. There's a particularly riveting scene in which Wood and Whisnant meet following a news conference in the parking lot outside the local Dollar Store. The scene firmly roots the film in reality as the men go toe-to-toe.

As eccentric as it all seems, there's a go-for-broke quality behind the entire quest by the two men. Whisnant eventually gets fed up with the hypicracy of the whole reality tv game and Wood learns that life can hold hidden lessons, even in the most adverse of situations.

As crazy as it all seems on the surface, "Finders Keepers" is a film with a lot of heart that will give you renewed faith in humanity and a truly warm feeling of hope, even when presented with the most absurd and futile circumstances.

John Wood, the protagonist in "Finders Keepers," determined to gain custody of his amputated leg at all costs


FINDERS KEEPERS
A FILM BY CLAY TWEEL AND BRYAN CARBERRY
RATED R FOR LANGUAGE
82 MINUTES
AVAILABLE NOW ON iTUNES AND ALL VIDEO ON DEMAND PLATFORMS
Posted by Dwight the Connoisseur at 8:35 PM