Get Your Halloween on early with Charise Castro Smith's deliciously dark comedy "Feathers and Teeth" which kicks off Goodman Theatre's 2015/2016 season in the Owen Theatre. Developed in Goodman's 2014 New Stages Festival of new plays by established and emerging playwrights in American theatre, the play is directed by Resident Artistic Associate Henry Godinez, the pioneer in  programming works by Latino artists at Goodman. Feathers and Teeth runs in the Owen Theatre through October 18. For ticket information, visit GoodmanTheatre.org/Feathers.

Feathers and Teeth is a theatrical homage to 1970s horror films through the filter of the revenge play.  The play opens with father Arthur's (Goodman veteran Eric Slater, Smokefall, Revenge of the Space Pandas) new live-in fiance-from-hell,  Carol (Jeff Award nominee Christina Hall), making a disastrous attempt at preparing the family pot roast meal. Father Arthur pulls into the driveway, running over a mysterious creature, which he brings in squirming and moaning inside Carol's discarded roasting pot, which turns out to be the only remaining heirloom left by his deceased wife, Ellie (Ali Burch, in her Goodman debut). Her daughter, 13 year old Chris (who appeared in the New Stages Festival reading and workshop productions of  Feathers and Teeth) is convinced her father's fiance is ill-intentioned and may have even had something to do with her mother's death, but Dad isn't hearing any of it. Enter Chris's dorky would-be suitor Hugo (Jordan Brodess, another New Stages production alum), and you have all the makings of a mad-cap horror comedy. 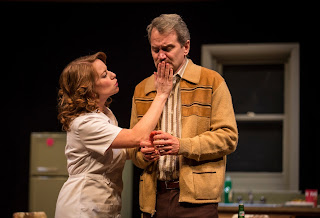 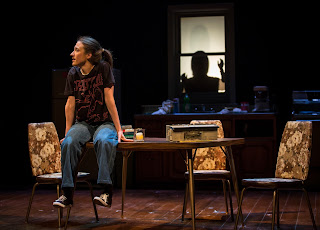 Olivia Cygan as daughter Chris, is perplexed over the cause of her mother, Ellie's death (Ali Burch, seen as a shadowy figure in the background, in her Goodman debut)

The laughs, the quirkiness and the gore build steadily over the next intermission-less 90 minutes. The pacing is masterfully orchestrated by director Godinez. In spite of the mayhem, the laughs are side-splitting. (There's plenty of that onstage too!)

One stroke of genius is the addition of a Foley Artist (so-named for radio drama sound effects artist Jack Foley), Carolyn Hoerdemann, who can be seen in a balcony alcove just above the stage wielding any number of  props and injecting  sounds to give voice to the play's creature and audio texture and nuance  to the scenes as they unfold. Seen in an eery half-light, she's a treat to watch in her animated pursuit of the perfect sound effect for the moment. Although practically off in the rafters, she's just as much a part of the production as the actors on stage.

Besides being a terrific play that somehow touches on the delicate subject of death and a family's     dysfunctional ability to cope with ensuing grief, it also blends that underlying theme with a horror story that is a hoot every step of the way. Credit the  skills of playwright Charise Castro Smith, who was one of the bright lights of last year's New Stages Festival, with credits both as a writer and actress (plays include Estrella Cruz/The Junkyard Queen at Ars Nova ANT Fest/Yale Cabaret/Upcoming:Halycon Theatre), Boomcracklefly (Miracle Theatre in Portland, Oregon) and, acting credits in Royal Shakespeare Company/Gable Stage/The Public Theatre Antony and Cleopatra and TVs The Good Wife and Unforgetable.  Castro Smith is one of the bright new voices among Latino writers. Director Henry Godinez is credited with spearheading Goodman's first Latino Theatre Festival in 2003, which showcases Latin theatre artists from Chicago and around the world, including Barcelona and Mexico City. Before Godinez directed the Goodman/Teatro Vista co-production of Cloud Tectonics by Jose Rivera in 1995, Goodman had never produced a play by a Latino writer. The Goodman has hosted five more Latino Theatre Festivals over the next decade and has simultaneously included more Latino works in its regular season.

This staging of Feathers and Teeth is proof positive that works by Latino artists are not only an integral part of Goodman's programming, but provide for a delightful theatrical experience that everyone can enjoy.


Posted by Dwight the Connoisseur at 2:30 PM