Thursday October 22 lineup includes DOC Milano 2015, For Grace about Chicago super chef Curtis Duffy, and Degraded, a dramatic look at the turmoil in Palestine and its effect on women 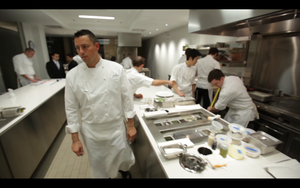 
The 51st Chicago International Film Festival continues with a Thursday, October 22 lineup that reprises some of the memorable titles of its opening week, such as Motley's Law (2:30pm)  and A Very Ordinary Citizen (4pm), but profiles the struggles of Michelin-starred Chicago Chef Curtis Duffy and his struggles to open his dream restaurant in FOR GRACE, screening at noon at the AMC River East 21. As seen through the cinematic eyes of Chicago Tribune James Beard nominated food critic Kevin Pang and filmmaker Mark Helenowski, the film documents the struggles of Duffy to perserver in the demanding world of haut cuisine restaurants against the backdrop of a troubled life. Plagued by personal demons in high school that led to him taking refuge in the kitchen, Duffy lost his wife and children and a huge chunk of his emotional stability and self-esteem to pursue his dream. Pang and Helenowski use their camera to probe deep below the emotional layers of a complex individual with more stamina and can-do spirit than he probably has lucky chances. It all adds up to a celebration of not only the art of cuisine, but a triumph of the human spirit against all offs. Screening at AMC River East 21 at 3:30pm with a repeat Monday, October 26 at 5:30pm. 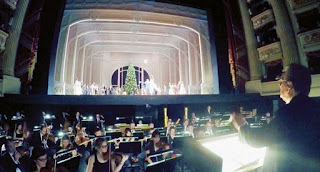 The screening day begins at Noon with the Architecture Documentary Milano 2015. From producer  Cristiana Mainardi and a team of directors, incuding Roberto Bolle, Silvio Soldini, Walter Voltroni, Cristina Capotondi, Lionello Carri and Giorgio Divitto, the film is a sort of visual cinematic fresco that looks at the architectural, cultural and spiritual soul of the great architectural, artistic and industrial city of Mlan through the images of its fantastic building, its art and its people. The camera creates a collage of images from the highest skyscrapers in Milan, to the excellence of its theaters and the great opera house, La Scale, to the cloistered walls of a nunnery to the streets of Milan and the lingering faces of its habitués to the pristine countryside of Lambardi. The six directors combine their images and sensibilities to weave a varied portrait of an historic city and its variegated people. 103 minutes. In Italian with English subtitles. It screen Thursday, October 22 at noon. 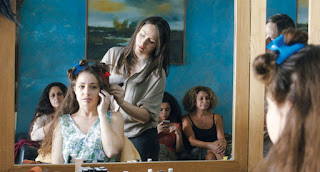 The piece de resistance of  Thursday's screenings is the France/Palestine chamber drama DEGRADE from directors Tarzan and Arab Nasser. The film takes place entirely in the cramped quarters of a beauty shop in the war-torn Gaza Strip. "Fried Green Tomatoes" it is not! The story features a panoply of Arab women trapped inside the beauty salon, attempting to go about their weekly beautification rituals while the vagaries of the political conflict outside are waged in varying degrees of danger. The ironies within are only overshadowed by the atrocities that occur without. Yet, the women continue their interpersonal banter, recounting failed affairs, miscarriages, loves lost, even illicit affairs. It's amazing how we westerners consider those in the Middle East so different, yet, to hear the stories of these women, except for the suicide bombs and gunfire outside (unless you're in Englewood or the West Side of Chicago), this slice-of-life drama could have happened anywhere. There's a ton of incongruous thoughts, actions and characters, which melds comedy with tragedy. Like the arduous resistance leader, hunted by Hamas, who sits outside the beauty shop attempting to woo its owner, a pet lion on a chain in tow, which he occasionally use to menace the women to get their attention. There's also the pregnant woman, constantly experiencing labor pains, whose set to deliver at any minute, while the war rages outside.

Then there's the drug addicted house wife, whose having an affair and encouraging the devout, prayerful woman-in-a-burka sitting next to her to try some artificial heroine. Another pair of women are getting all dolled up for either their weddings, or a date on the sly with a new beau. (It probably won't happen though. All the roads are closed by the constant combat outside.) Yet, they continue to get gussied up, even after the lights and power go out multiple times and the gunfire outside rages on with varying degrees of mounting personal danger.

If you're a devotee of foreign films and film festivals, you'll instantly recognize foreign film icon Hiam Abbass, a bit older, but still captivatingly beautiful! This film takes you right to the barricades of the Gaza Strip, with all its ironies, absurdities, comedy and tragedy, where you'll leave your heart. DEGRADE screens Thursday October 22 r 6:15pm, Friday October 23 at 8:30pm and Friday, October 28 at 12:30pm.

Posted by Dwight the Connoisseur at 3:25 PM