NEW YORK---A unique opportunity to see two legends of the stage and screen on the same stage is "THE GIN GAME" NOW THROUGH JANUARY 10 on Broadway at the Golden Theatre. Starring James Earl Jones and Cicely Tyson, the Pulitzer Prize-winning play by D.L. Coburn pits the 84 year old Jones and 90 year old Tyson as the mis-matched odd couple who find themselves thrown together in a dilapidated nursing home in God-knows-where. The two Tony Award-winning actors (Jones for The Great White Hope, Tyson for The Trip To Bountiful) are in top form as the sparring oldsters who meet over a begrudging game of Gin Rummy. 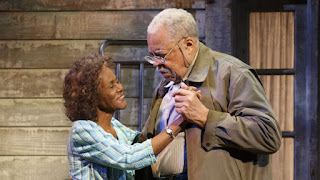 Jones, as the irascible Weller Martin lures newcomer Fonsia Dorsey, played with coy deftness by Cicely Tyson, into learning the finer points of the age-old game of Gin Rummy. The game turns out be a type of Rorschach Test for the human psyche of the two actors. We quickly learn that Martin/Jones is a poor loser and somewhat of a bully who, we later learn, was just a poor a loser in his personal life as he is at playing his beloved Gin Rummy, which he claims to be a master at. Fonsia/tyson, in her unassuming way, picks up the game right away and starts winning every hand. Martin gets more frustrated as the play unfolds and the ugly demons of his personality start to surface as Fonsia pricks away at his fragile ego by continuing the win.

By the play's mid-point, the friction between the two is so palpable, you could literally cut the bad air between them with a knife. Even though the plot is somewhat thin, the extraordinary acting skills of Tyson and Jones send this performance into the stratosphere, making it an electrifying experience. Credit Director Leonard Foglia with orchestrating the skillful pacing of this parlor drama.

The sets and costumes by Riccardo Hernandez excellently convey the throw-away, haphazard environment of the nursing home, which outwardly reflects the sociological positioning of the main characters as two elderly people, literally cast away by society like so much used and discarded furniture. Indeed. the card table which the Martin/Jones character uses to 'school' Fonsia is something he found behind the trash bins.

Tyson's character is not so fragile as one would initially believe. She challenges Martin and nearly pushes him over the emotional edge. There's a lingering feeling that there's much more to this play and the dramatic scenario it posits. Perhaps that's another play, yet to be written. Suffice  to say that the opportunity to see two such enduring legends on the same stage is not to be missed! For tickets and showtimes, visit telecharge.com
Posted by Dwight the Connoisseur at 3:12 PM