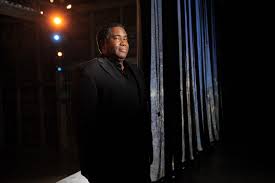 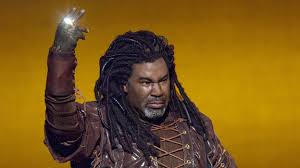 NEW YORK--"In Their Footsteps: Great African American Singers And Their Legacy" was a celebration by the New York Philharmonic of the legendary voices of artists of color from the last century; Marian Anderson, Betty Allen, William Warfield and George Shirley, who was in the audience to receive thunderous adulation.

Curated by esteemed Metropolitan Opera Baritone and the Philharmonic's The Mary and James G. Wallach Artist-In-Residence Eric Owens, the concert not only celebrated the voices of the past, but gave attendees an opportunity to hear some of the greatest black voices currently gracing concert stages and opera houses around the globe.

African American artists are no strangers to the New York Philharmonic Stage and its newly named David Geffen Hall. Marian Anderson appeared with the orchestra on multiple occasions before her historic debut at The Metropolitan Opera in 1955. William Warfield similarly, was a frequent and beloved figure on both stages. Yet, there is no denying, there is still much work to be done.

The concert featured a stellar cast of singers in repertory linked to each of the named legends. Most notable was the Philharmonic's long overdue debut of selections from Scott Joplin's opera "Treemonisha", an overture that masterfully blended classical motifs with ragtime, which was conducted with exhuberance by Conductor Thomas Wilkins in his New York Philharmonic debut.

Soprano Laquita Mitchell dazzled as the soloist in the 1910  aria, "The Sacred Tree."
Mitchell, in her New York Philharmonic Debut, is no stranger to opera lovers. She was hailed by the New York Times for her portrayal of Violetta in Verdi's La Traviata in NewYork City Opera's 2012 season. She can also be seen on San Francisco Opera's DVD of her performance as Bess in Porgy and Bess, which opened their 2014 season. 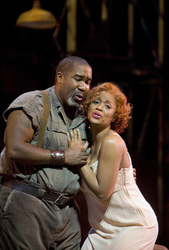 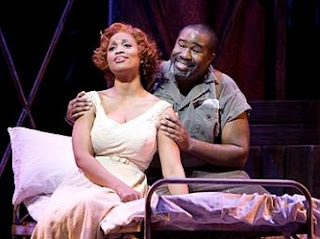 All of the singers have significant pedigree anda long list of operatic and symphonic triumphs with major orchestras and opera companies around the world.

Besides being the Philharmonic's artist-in-residence, Eric Owens has appeared with the Metropolitan Opera in Wagner's "Der Ring des Nibelungen" as Alberich in the opera Das Rheingold in the 2010 season. He will appear as Orest opposite legendary Mezzo Soprano Waltraud Meyer in Richard Strauss's Elektra April 14-May 7, 2016 at the Met.

Owens, who gave his own pre-curtain 'artist indisposed' speech, due to a bronchial condition, none-the-less sang brilliantly, reprising his own triumphs, and those of baritones past, in Gershwin's Porgy and Bess in a scintillating duet with Laquita Williams in "I Got Plenty O' Nuttin'" and "Bess You Is My Woman Now." He later channeled the late, great William Warfield in the show-stopping "Ol Man River"  from Jerome Kern's Show Boat.

Tenor Russell Thomas gave a commanding reading of the emotive lecture "Wrong Is Never Right" and soared in  "Ingemisco" from Verdi's Requiem.

All of the singers gave stand-out performances, with each one eclipsing the previous.
Janai Brugger, the 2013 Placid Domingo Competition winner, gave a shimmering rendition of Bach's "Ave Maria."

The entire cast came together in a celebratory rendition of a selection from Aaron Copland; "Simple Gifts" from Old American Songs, historically premiered by William Warfield in 1955 at the Philharmonic, and later  famously recorded in by him in 1958. The orchestra concluded  with  Wilkins conducting a rousing Selection from Copland's Appalachian Spring Suite.

The Dorothy Maynor Singers of the Harlem School of the Arts made an impressive showing in their New York Philharmonic Debut.


It was a wholly satisfying evening that made one yearn for more representation of these great artists on the world's major musical stages.
Posted by Dwight the Connoisseur at 6:52 AM