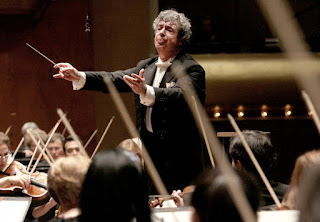 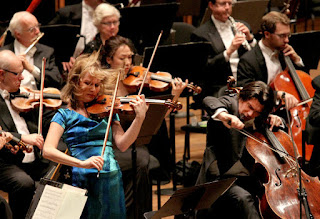 NEW YORK--The esteemed Russian-American conductor Semyon Bychkov conducted an enthralling program that viewed the wide-ranging compositions of Johannes Brahms through three prisms; first through the eyes of a modern composer, then, as a showcase for two string virtuosos, and, finally, as the enduring voice of conservative Romanticism as spawned by Beethoven at the beginning of the 19th century.

The concert began with German composer Detlev Glanert's Brahms-Fantasie' Heliogravure for Orchestra. Thanks to the leadership of Music Director Alan Gilbert, a champion of new music, its not an uncommon occurence for the works of modern composers to be presented in season repertory. The sight of living composers to arise from the audience to receive accolades for their work has become an almost weekly occurrence.

German composer Detlev Glanert's Brahms-Fantasie makes music reference to Brahms' Symphony No. 1, which is performed later in the program.(If one listens closely, there are also the opening strains of Wagner's Parsifal. The composer was Brahms' nemesis.) The work is subtitled "A Heliogravure for Orchestra," which, I later learned, was a reference to a 19th century photographic technique in which phtographs are painted over with a chemical substance which essentially transforms its visual and material.

As confounding as the Brahms-Fantasie may have been for some listeners, the Concerto in A minor for Violin, Cello and Orchestra with young Geoirgian megastar Lis Batiashvili playing her 1739 Guarneri del Gesu violin and French virtuoso Gautier Capucon playing his rare 1701 Matteo Goffriller cello, was a sheer delight. To say the performance was exquisite is an understatement. This was the most gratifying performance thus far this season, even surpassing Lang Lang's impassioned brilliance on Opening Night.

This was music-making at its finest, with the orchestra, its conductor and the soloist in complete sympatico. Batiashvili and Capucon finished each other's musical phrases the way long-time lovers finish each other's sentences. Their ringing tones at times emulated each other and Bychkov's deft handling of the orchestra took great pains not to overshadow them, but to provide both a framework and a spiritual reference that  highlighted the colorful playing of the two soloists.

The woodwinds and Batiashvili traded passages that were among the most sensitive and the cello and orchestra played spirited passages both separately and in unison.

The height of the performance was when Batiashvili and Capucon played intertwining passages that sounded like two lovebirds in full flight.

Brahms' Symphony No. 1 is the Evander Holyfield of all symphonies. When it arrived in the U.S. a year after its European premiere, it set off an intense rivalry between the esteemed conductors and intense controversy among critics.

Bychkov and the New York Philharmonic rose nobly to the occasion, setting out the pinderous thematic material with great deliberation.  The pounding pulse of the timpani provided backdrop shrouded in angst. The strings and horns further established the elegiac mood.

At times, the orchestra  rose to a collective voice, like a choir singing an impassioned requiem. The violins sang expressively in the ensuing Andante,  ending in hushed reverence as the oboe rendered its haunting theme. The clarinet, a beautiful instrument that is not heard often enough, took charge of the theme that introduced the Allegretto, with Bychkov skillfully building the orchestra to a finale that brought all of the thoroughbreds thundering home.

Posted by Dwight the Connoisseur at 1:49 PM