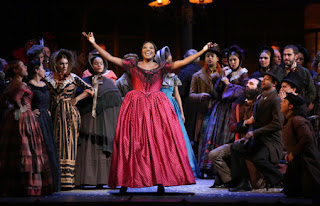 ANGEL BLUE AS MUSETTA IN THE CURRENT PRODUCTION OF LA BOHEME 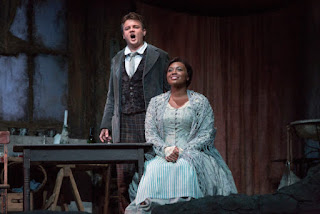 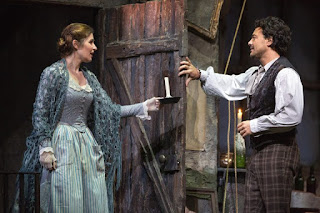 The Christmas Eve party at Cafe Momus with Production and Scenic Design by the legendary Franco  Zeffirelli and Costume Designer Peter J. Hall


by Dwight Casimere
Reviewed at the Season Premiere Sept. 25
through Dec. 13 on the Metropolitan Opera House stage in Lincoln Center 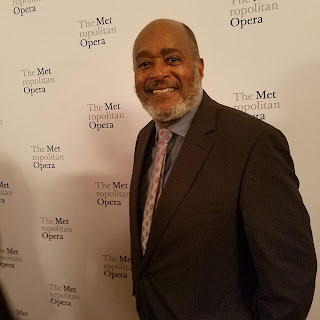 La Boheme is a timeless story of young love among struggling artists that rings just as true today as it did when it debuted at the Teatro Regio in Turin, Italy in 1896. Puccini's classic has even been transposed to modern times, with the Broadway musical Rent which made history in 1996 as the first musical to win both a Tony and a Pulitzer Prize for drama. Its not surprising that the house was sold out for every performance of the opera that I attended at the Met this season.  Its my absolute favorite opera, so I saw it at every opportunity.

Much credit for the success of this year's season's Revival Production can be laid at the feet of Nicole Car as Mimi and Vittorio Grigolo as Rodolfo. The radiant duet, sung in the First Act, is the scene that anchors the opera. In it, they declare their love for each other. Standing in the cold artist's garret where Rodolfo lives with his ragtag group of struggling artists,  the poignance of their plaintive expressions is palpable. Even after hearing the same duet in countless pairings over the years, their performance still tugs at the heart.

Franco Zeffirelli's sets and costumes are to this day, superbly evocative of Paris in La Belle Epoque. Even after nearly 40 years. The Christmas Eve dinner party at Cafe Momus remains one of the true joys of operatic staging.

As with all things of artistic value, the real significance is in the details; the a rose crushed between the pages of a little prayer book,  a handmade bonnet purchased from a street vendor, an old overcoat that one of the artist's has worn so often that parting with it is like separating from an old friend, these are the infinitesimal details that make this opera so precious.

Conductor James Gaffigan renders each passage of Puccini's lush, dramatic score with the deft hand of a true artist. Each sweep of the baton is like a brush stroke from Picasso.


Revival Stage Director J. Knighten Smit deserves a standing ovation as does Lighting Designer Gil, Wechsler. Future performance dates on the Metropolitan Opera stage fall right around the time of the Holiday shopping season, which make it a perfect opportunity to take in a performance if  planning a shopping trip to New York. Future dates are No. 29, Dec. 3, 6, 10 and 13. For tickets and information visit metopera.org.


Posted by Dwight the Connoisseur at 9:03 AM