NORTH AMERICAN AND U.S. PREMIERE PRODUCTION SURE TO BE A NEW MET OPERA CLASSIC 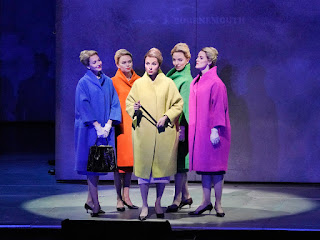 Isabel Leonard in the title role with her shadow multiple personalities 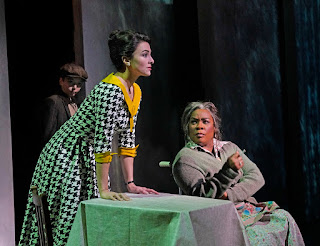 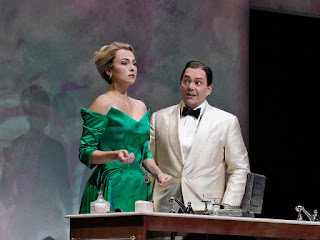 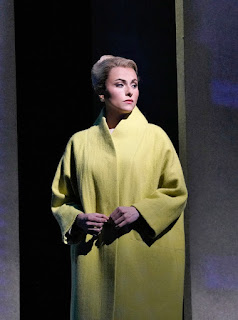 Isabel Leonard in the title role 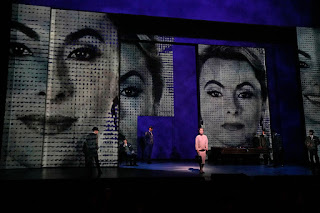 The dramatic sets and projections byJullian Crouch and 59 Productions

NEW YORK, LINCOLN CENTER--Spectacular singing, superb cinematic sets,  brilliant costumes and a sweeping score make the North American premiere of the new opera Marnie the crown jewel of the Metropolitan Opera's 2018-19 season. An original Met commission by composer Nico Muhly, with a snappy libretto by Nicholas Wright, also in his Met debut, it is sure to become a Met Opera staple in seasons to come. The opera will be transmitted Live in HD in movie theaters around the world during the Saturday, Nov. 10 matinee at 1pmET. For tickets and information, visit metopera.org or fathomevents.com.

Marnie is based on William Graham's sensational 1961 novel and also inspired Alfred Hitchcock's cult classic film Marnie in 1964. The Met pulled out all the stops, enlisting  a world-class team and audiences love it.

The composer, Nico Muhly is widely known for his scope of original works for  the Chicago Symphony, New York Philharmonic, New York City Ballet and Paris Opera. Nicholas Wright, who wrote the snappy libretto, was the first director of London's Theatre Upstairs and has served as co-artistic director of the Royal Court Theatre and at London's National Theatre. Michael Mayer, who directs Marnie for the Met, won a Tony for Broadway's Spring Awakening.

Marnie tells the story of a beautiful but confused  woman in late 1950's England who compulsively changes personalities. That fact is established at the outset of the opera, when the curtain opens after the first dramatic notes from the orchestra, under the commanding leadership of conductor Robert Spano in his Met debut. The curtain opens to reveal a series of projected video panels that depict the multiple faces of Marnie, who assumes a new look and identity at the drop of a hat. The sets and projections by Met opera veteran Julian Crouch move with a seamless cinematic quality, depicting the chameleon-like transformation of this enigmatic character. In a stroke of creative genius, Marnie, sung with commanding presence by Met opera favorite, the luminous Isabel Leonard, is shadowed by a quartet of women, dressed in neon-bright costumes by Costume Designer Arianne Phillips in her Met debut. She also did the costume's for Quentin Tarantino's Once Upon a Time in Hollywood.

Muhly's score uses a variety of musical textures to depict the sudden shifts in Marnie's life. She's an outright thief, who cracks a safe and steals all the profits from the ruthless takeover firm she works for.  She is then blackmailed into marriage by smarmy businessman Mark Rutland, sung with authority by Met veteran baritone Christopher Maltman.

Marnie has an all-star cast, including the celebrated Denyce Graves as Marnie's mother. She has dazzled Met audiences in the past as Carmen ( Met debut, 1995) and Dalila in Samson et Dalila, among other starring roles. Countertenor Iestyn Davies is outstanding as Terry Rutland and English National Opera regular Janis Kelly is similarly convincing as Mrs. Rutland.  She sang the role of Pat Nixon in John Adam's Nixon in China in a role debut in 2011. Tony-nominated choreographer Lynne Page who was nominated for her work on La Cage aux Folles on Broadway and in London's West End, deserves a special mention for her superb work in this production, as does Chorus Master Donald Palumbo, who marshaled his considerable vocal forces into a cohesive presence throughout this demanding opera. Little Boy Gabriel Gurevich and James Courney as Marnie's therapist Dr. Roman also received well--deserved ovations. One of the performers gave a Chorus Line-style  high kick as the audience gave the entire cast and crew a standing ovation. And that about sums up the entire mood of the evening. Tippi Hedren, the now 88 year old American actress and animal rights activist who played the original Marnie in the Hitchcock film, was onstage to take curtain-call bows at the Opening Night of the Met's U.S. Premiere. That's as good an endorsement as any opera can get. Marnie, Live on stage at the Met in performances Weds. Oct 31 at 7:30pm ET, Saturday Nov. 3 at 8pm ET, Weds. Nov. 7 at 7:30pm ET and Live in HD in theatres worldwide Sat. Nov. 10 at 1pm ET. For tickets and information visit metopera.org.
Posted by Dwight the Connoisseur at 2:19 AM