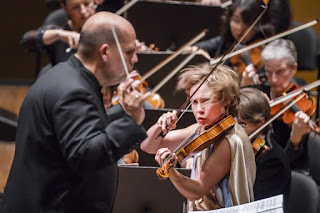 
The New York Philharmonic's regular subscription concerts of Oct 4-6 were a careful study of modern serious music, traversing several generations. The music spoke to the distinctive styles and references of each composer but conveyed a singular property of depth and imagination.  Music Director and Conductor Jaap van Zweden is showing his vast understanding of contemporary music and its relationship to the works of past composers.

The opening work by Dutch composer Louis Andriessen, who was present at the concerts, grew out of his idea to create, in his words, a "war-like piece, full of fast music and nervous terror." The music is constructed like a tone poem, with sections telling the story of Agamemnon, whom Andriessen likens to a pragmatic hero, rather than the villain he is normally portrayed as. Instead,  he musically portrays him as "an inspiring leader who's originally reluctant to go to war." Andriessen's music utilizes some lovely stretches of music for the Philharmonic's superb brass section, interspersed with energetic, stylized percussive music echoeing strains of jazz, rock and funk, interrupted by some truly lovely stretches of woodwinds and long, elegant lines for strings. The work brought the audience to its feet and van Zweden invited the composer onstage for a well-deserved bow.

Igor Stravinsky wrote his Violin Concerto in D in collaboration with violin virtuoso Samuel Dushkin in 1931.It remains to this day a challenge of rhythmic and technical achievement, even among the most accomplished violinists. Guest soloist Leila Josefowicz rose to the occasion and then some, playing the concerto as if it were written expressly for her. It was a marvel to watch her dispatch its Olympian octive leaps and Herculean runs, quadruple stops,exaggerated harmonies and sudden harmonic shifts with ease. Her energetic and enthusiastic portrayal was nothing short of extraordinary. Conductor van Sweden, an accomplished violinist himself, was careful to give her the space and tonal support to allow her leaps and bounds to shine against the lush background of the orchestra, over which he maintained absolute control.

Stravinsky's Symphony of Wind Instruments was likewise an exercise in control. Written as aeulogy to the French composer Debussy, it is at once strident and profundly sorrowful. Conductor van Zweden brought out the full palette of tonal color that made this piece a musical kaleidoscope.

Debussy's La Mer was everything to be hoped for and more. It was all there, shimmering pastel colors, undulating rhythms and vibrant energy.  This was the crowning moment in a concert that was well crafted from beginning to end.

In addition to her stellar performance, Josefowicz was the 23rd recipient of the Avery Fisher Prize which includes a $100,000 award and the artist's name etched onto a grand plaque in the David Geffen Hall lobby. For more information on future concerts, visit nyphil.org.
Posted by Dwight the Connoisseur at 10:58 AM