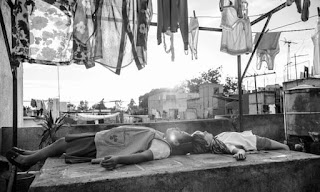 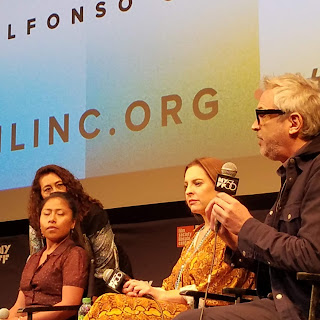 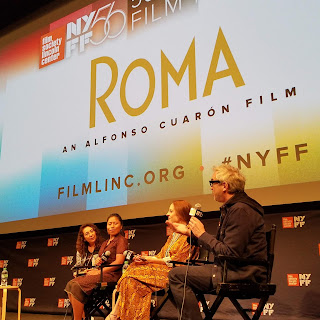 Filmmaker Alfonso Cuaron brings the quiet, but emotionally powerful film ROMA to the big screen as a Centerpiece of the Main Slate presentations at the 56th New York Film Festival. The joint Mexico/USA Netflix production is also screening as a Gala Presentation at the Chicago International Film Festival.

Cuaron is a highly accomplished director. Born and raised in Mexico City, he started filming everything that moved beginning at age 12. As a multi-talented film director who has done everything from writing, editing, photographing and producing films. He has won multiple awards on several continents, including two Academy Awards in 2013 for the space disaster drama Gravity for Best Achievement in Directing, and Best Achievement in Film Editing, which he shared with fellow Gravity Editor Mark Sanger.

ROMA is a highly personal film, shot entirely in luminous black and white, often using a wide angle lens to completely envelope the viewer in the all-encompassing world which at times overwhelms the central character, a simple teenaged domestic worker, Cleo(Yalitza Aparicio), who lives with a dysfunctional middle class family, who own precarious lives are on the verge of devolving into chaos. Cleo is of native Mexican Mixteco heritage. The family she works for are upper middle class white.

The crystalline black and white film used in ROMA has the effect of bringing extreme clarity to the images on screen. It fixes the mind firmly in the mise- en -scene in which the story takes shape, rooting it in the mind as it were having a subconscious experience in tandem with the protagonist. It also fixes the story in the recent past, which is the social upheaval of 1971.

The house that Cleo works in  is a case study in chaos. She presides over four unruly children along  and an untrained dog who relieves himself all over the tile driveway. The film  opens with first the sound of the mop slapping against the tile,  then the sight of water washing over it.  Cleo meticulously but futilely attempts to mop the driveway clean, a task much like Sisyphus pushing his stone.

he man of the house, Antonio (Fernando Grediaga) constantly tells his long-psuffering wife Sofia (Marina De Tavira) that he has all these last minute business trips to conferences that he has to go on (he's a medical professional), when actually he's just going across town to stay with his mistress. He eventually abandons his family, leaving them penniless. The other servant girl in the house Adela (Nancy Garcia Garcia) introduces Cleo her to her cousin Fermin (Jose Antonio Guerrero), a former juvenile delinquent turned martial arts fanatic. "I owe everything to martial arts," he tells her. "It saved my life."  There's one pathetically comic scene in which Fermin spirits Cleo back to his apartment. As she lies in bed demurely covering herself with a blanket as she awaits his advance, he strips naked, grabs a curtain rod and starts going through a bizarre series of martial arts moves! Cleo, as you would expect, gets pregnant. Once she tells Fermin, he vanishes from the scene, only to appear as a gun-toting facist in one of the deadly riots which resulted in the Corpus Christi massacre in which the military shot and killed 120 student demonstrators. The two have a chance encounter as Cleo and her family are in a baby shop buying a stroller for her out-of-wedlock child. Fermin is part of an armed gang chasing down a student demonstrator. The two stare at each other for a long, tense, protracted moment as Fermin points a gun at her in a threatening manner. Recognizing her, he turns tail and vanishes into the crowd.

This film later contains perhaps the saddest scene ever witnessed by this reviewer. I won't reveal more, because it would ruin the film for you.

In the post screening Q. and A. session at the New York Film Festival, Cuaron revealed that he shot the film in sequence, so as to duplicate the real-life experience recorded in the book which served as the the source material for the film. Aided by a translator, the film's star, Yalitza Aparicio and co-star Marina De Tavira, talked about how they would receive copies of the day's scripts just moments before shooting, and would only have a few hours to rehearse their lines before going before the cameras. "I wanted to have the filming process duplicate as much as possible the experience of living day-to-day life." Mission accomplished. The film has a realistic film, and as they say in Oscar campaign parlance, is deserving of your attention.

Posted by Dwight the Connoisseur at 3:29 PM