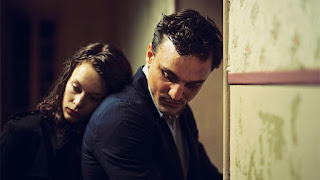 German art film genius Christian Petzold who brought us the Holocaust survivor drama Phoenix in 2014 takes a time-shifting look at Nazi occupattion in TRANSIT, based on the 1942 book Transit Visa by Anna Segher.

Georg (Franz Rogowski)  is a burned out refugee who escaped from two concentration camps and finds himself in Nazi occupied France on the trail of a mysterious dissident writer. A friend on the run gives him some letters to deliver to the writer, who is living in exile in a fleabag hotel somewhere in northern France. Instead of making the connection, he finds that the writer has committed suicide n the most horrific way. He assumes the dead man's identity and learns that he is suddenly in possession of  the much needed papers for transport out of the hellish occupied territories. Armed with newly doctored transit papers, oodles of cash and guaranteed safe passage on a ship bound for Mexico and a new life. Hence the name of the film. An off-camera narrator, who turns out to be the bartender Barmann (Matthias Brandt)  at the local bistro where the protagonists often meet, intones how Georg quietly celebrates by eating a solitary Margarita pizza and sipping Rose wine.

After a harrowing escape from occupying forces by train, shlepping  a fellow refugee dying from a Nazi-induced leg wound , he arrives in Marseilles. A mysterious woman taps him on the shoulder, thinking he is her long lost husband who was forced into exile. He chases behind her only to see her vanish into the crowd. There's a subplot where he bonds with a young North African illegal immigrant boy named Driss (Lilien Batman) who lives in the Marseilles immigrant ghetto Maghreb, an obvious reference to today's global immigration crisis. He connects with the boy's mother, (Maryam Zaree) who is a deaf mute.

Georg falls head-over-heels in love with the mysterious Marie (Paula Beer), who herself has taken up with a dissident doctor scheduled to leave for Mexico with proper transit papers. He refuses to leave because of his love for her.

The setting for the story is some time in the not-so-distant past, yet the plot has overtones of the Nazi occupation of  France in World War II and the notion of ethnic cleansing, called 'the purification' in the film. Its an unsettling film that alludes to the fact  that the sins of the past are oft repeated. Its all done with a seamless blending of contrasting elements, both sublime and profane,and  with brilliant camera work by Cinematographer Hans Fromm that captures the grit and mystery of Marseilles. The Mistral, the violent cold wind that savages the region, plays a role in it too. Its an expertly cast, gritty film that recalls the great 'film noir' auture movies of the 40s and 50s. Petzold has done it again!  From Schramm Film,Neon Productions, and Arte France Cinéma, with U.S. Premiere at  the 56th New York Film Festival and in International Competition at the 54th Chicago International Film Festival.
Posted by Dwight the Connoisseur at 4:47 PM