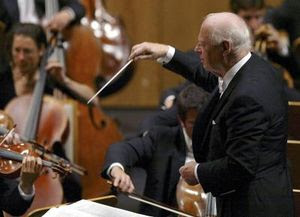 NEW YORK- I last saw the esteemed conductor, Bernard Haitink in a two-week residency with the Chicago Symphony Orchestra, conducting programs of Mahler’s Fourth Symphony and Haydn’s Creation. Both performances stand as monuments to his greatness.

With great anticipation, I rushed to Avery Fisher Hall in Lincoln Center to hear him Guest Conduct the New York Philharmonic in Richard Strauss’s illustrious tone poem, Don Quixote (Introduction, Theme with Variations, and Finale) and Beethoven’s Symphony No. 6, Pastoral. The evening could not have been more sublime.

At 82 years of age, Maestro Haitink displays the type of economy of movement and interpretation that eschews the flashy and unnecessary. All pretenses are stripped away and only that which is essential to the mission at hand is introduced. Entrances and exits are clean and crisp. Tempos are precise and unhurried. Nuances in tonal color and balance are carefully observed and inner voices of instrumental embellishments and subtleties are brought to the fore with utmost clarity. In short, you become aware of things in the most often played symphonies, such as Beethoven’s Pastoral, that you had never noticed before.

Strauss’s Don Quixote started simply enough, with the orchestra’s Principal Cellist Carter Brey and Principal Viola Cynthia Phelps as soloists. Both the conductor and soloists gained intensity as the work recounted the misguided, but well-intentioned travails of Cervantes’s beloved knight-errant and his chivalrous missteps, along with his faithful sidekick, Sancho Panza. Ms. Phelps and Mr. Brey indulged in a bracing point, counter-point, particularly in the bracing Variation IX (Fast and Stormy). The Wind Machine, used to depict Don Quixote and Sancho in imaginary flight across the sky in Variation VII (A Bit More Calm than the Preceding), is used sparingly, but effectively.

Maestro Haitink brings it all to a peaceful conclusion, with dreamlike serenity.

As energetic as the Don Quixote was at times, Maestro Haitink and the New York Philharmonic created an atmosphere of verdant hills and fertile valleys that belie what history tells us was the tumult of the composer’s personal life and the political and social upheaval of his time.

In 1808, when the majority of the Pastoral was composed, Beethoven was in the advanced stages of hearing loss and his beloved Vienna was a hotbed of unrest. The composer would escape often to the countryside to the homes of wealthy friends and benefactors. It was out of these forays into the peaceful refuge of nature that the Pastoral was born. Themes, like blossoming flowers appear and dissipate as new life emerges among the violas, cellos and woodwinds. Haitink carefully controlled the entrances and exits of these subtle voices, to achieve an exquisite equipoise of sound. A smoldering intensity dominated the Allegro: Thunderstorm. Flutes and trumpets played eloquently in the Allegretto: Shepherd’s Song.

Posted by Dwight the Connoisseur at 12:49 PM